Americans’ support for BLM declines, but US State Department promotes the radical movement at embassies worldwide

At the same time that support for the Black Lives Matter movement plummets in the US, the Biden administration ramps up its support at the State Department, which may violate the Hatch Act 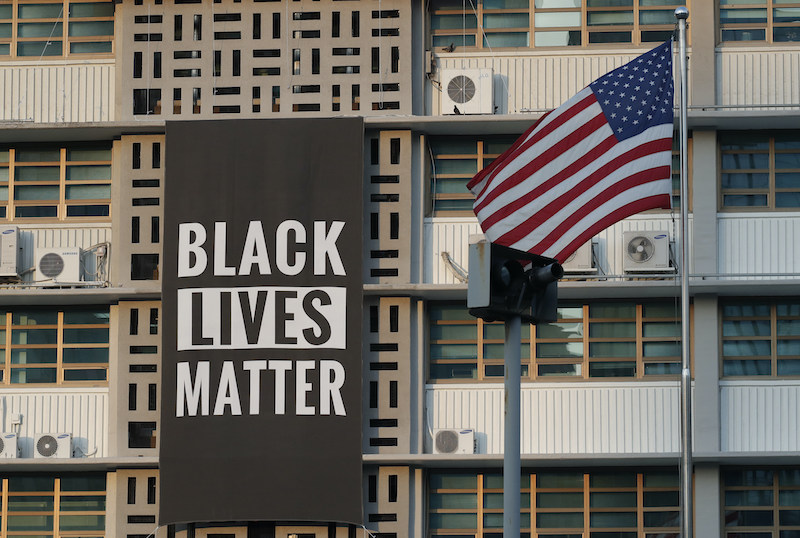 Newly released figures show that despite the Black Lives Matter movement still surviving as a global movement with political support from world leaders and financial backing from big business, its grassroots support is in serious decline in the US among all social groups. A New York Times article has published several charts detailing the rise and decline in support for the controversial movement.

According to its polls, support for Black Lives Matter peaked in early June 2020, a week after George Floyd’s death. It went up near 25-percentage points among the general population, with the biggest surge among the Hispanic or Latino population. However, immediately after violent BLM protests spread across US cities, the movement has seen a free-fall in support, especially among Whites. Currently, support is back to 2019 levels.

In the summer of 2020, the movement had garnered support not only among Black Americans, but also among Whites. However, White sympathizers have quickly fallen in numbers after the movement’s radical political activism and its propensity to attract violent protests became a nearly daily trending news topic. While the movement is still relatively popular mostly among minority ethnic groups, it has seen a rapid fall from grace especially among White Republican voters. All in all, the support for BLM and its political agenda has not only fallen from its peak numbers among Whites, the numbers have actually fallen well below pre-George-Floyd levels, which might indicate a disillusionment with the radical Black racial justice agenda in most White communities.

This could be explained by the fact that the peak levels of sympathy were not so much bound with BLM’s agenda in general, but were an outpouring of outrage and sympathy tied to one particular event, the killing of George Floyd, and the subsequent release of the video footage depicting his death. One notable exception can be observed among White Democrats, where sympathies have not declined to the extent observed by other voter groups. As the New York Times points out, “Every Democratic presidential candidate stressed the importance of racial justice while campaigning. And they did so not only to appeal to their diverse base, but also to white members of their party… Insofar as white support for B.L.M. is distinctly low, it would be even lower were it not for white Democrats.”

Although it displays the basic numbers in its charts, the Times article fails to reflect on the fact that BLM’s popularity has also waned among ethnic groups significantly, not only among White Republicans. The newspaper’s explanation is full of allusions to a White Republican bias and “fickle” sentiments, yet it completely disregards the dozen or so murders, countless injuries and billions of dollars worth of damage caused during BLM rioting in the US and worldwide. It also fails to mention that the loss of support in White communities could be ascribed to radical political theories associated with the movement, such as the critical race theory essentially depicting White history as the history of oppression, but also its attacks against the concept of the nuclear family.

The decline in law and order in cities where the police departments have been defunded in reaction to BLM demands has also sapped the movement’s popularity among the general population.

In stark contrast to popular trends, the US State Department seems to want to promote the BLM movement and its values with the help of global US missions. In a leaked document that bears the signature of Secretary of State Antony Blinken, the department authorizes the raising of the BLM flag at US embassies and the display of the movement’s symbols within embassy buildings. It lists the advancement of racial equity as a national security interest and for this purpose it encourages partnering with “like-minded” civil society actors to counter what they call propaganda and disinformation. The State Department “supports the use of the term ‘Black Lives Matter’ in messaging content, speeches, and other diplomatic engagements with foreign audiences to advance racial equity…”.

The State Department also encourages employees to participate in BLM-related events in private or on duty, but prohibits them “from combining BLM-related activity with ‘political activity’ while on duty or in the workplace and from engaging in partisan political fundraising in connection with BLM-related organizations.”

However, in the light of the Times report above, it is clear that the promotion of the BLM movement’s values and agenda largely corresponds with those of the US Democrats, thus making them the direct political beneficiaries of such activism. In fact, a number of official Democrat resources associate the party’s goals with those of the BLM movement, something that was correctly reported on by the Times article’s observation about all Democrat presidential candidates showing their support for the BLM movement. This raises questions about the State Department’s compliance with the Hatch Act under the Biden administration which prohibits party-political activism among diplomatic staff.