Church turned into a mosque in Germany

The first church has been turned into a mosque in Hamburg, Germany. Government officials and the ambassador of Kuwait will take part today in the opening ceremony of the mosque. 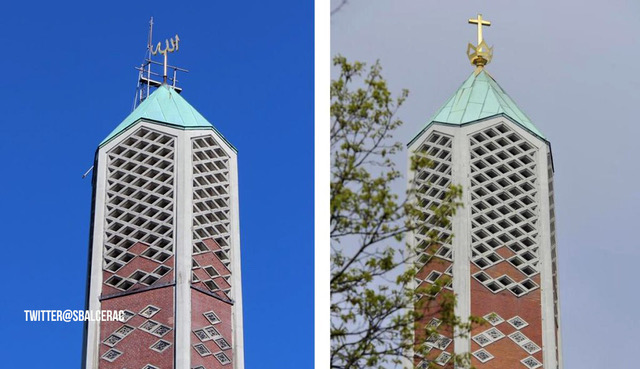 The Kapernaum-Kirche in Hamburg had been built to accommodate the needs of Christians in the developing Horn district in 1961. By 2002, due to a lack of followers and funds, the evangelicals had to sell the building.

In 2012, the church had been bought by the Muslim Al-Nour community, which has been gaining increasing influence in Germany. Nikolaus Schneider, the president of the council of the Evangelical Church in Germany, called the selling of the building to the Muslims a “tragedy”.

A photo on twitter which shows the cross of Kapernaum replaced by the word “Allah” on its steeple has been circulated on Polish twitter sphere for weeks.

“Merkel’s Germany – Instead of a cross, the word “Allah” now stands on top of the church’s steeple. A church in Hamburg has been turned into a mosque. Probably as part of “European values”.

The interior of the former church turned into a mosque in Hamburg, photo: Uwe Rohwedder

Part of the Christian priests and believers, however, claim that this purchase will “help bond” with Al-Nour. Even one of Kapernaum’s former pastors said that he welcomes Al-Nour to the church with open arms.

“Deutsche Welle” reports that Kapernaum is the first Church in Germany to be transformed into a mosque.

Hamburg’s senator of internal affairs Andy Grote, the ambassador of Kuwait Nadzib Al-Bader and the chairman of the central council of Muslims in Germany Aiman Mazyek will take part in the mosque’s opening.