After the intervention of the Polish Embassy, Fox News corrects itself over using the term “Polish death camp” in a banner during their show. 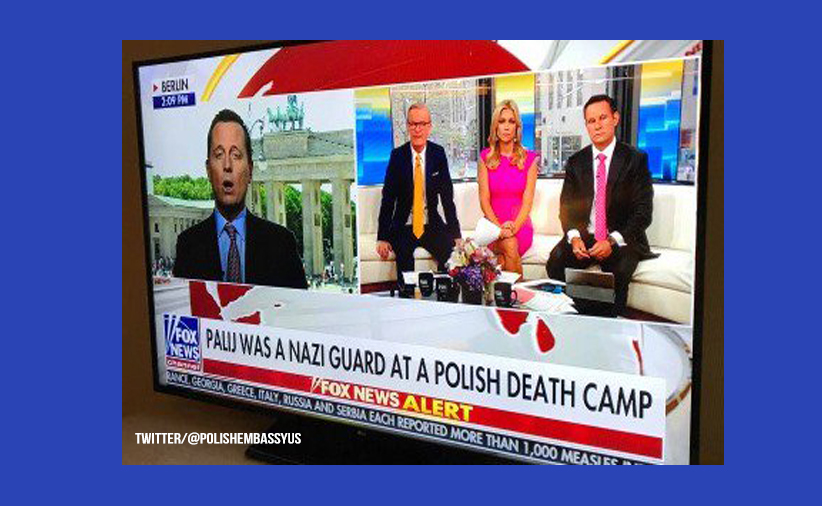 During the show “Fox and Friends” the term “Polish Death Camp” appeared on the banner when discussing the deportation of Ukrainian Nazi war-time criminal Jakiw Palij.

The Polish ambassador to the US, Piotr Wilczek quickly intervened. He asked Fox News not to mislead their viewers by using the term “Polish Death Camp”:

Fox News was swift to respond, correcting themselves and saying that it was not a “Polish Death Camp” but a death camp in German occupied Poland:

The Polish public opinion is very sensitive to using the term “Polish death camp”. Nazi Germany set up dozens of death and concentration camps in occupied Poland. The citizens murdered by German occupants were Polish as well as Jewish from Poland and all of occupied Europe.

Using the term “Polish death camp” is considered in Poland as distorting historical truth that the camps were German.

Polish Americans for many years have led the struggle to eliminate disinformation concerning concentration camps and death camps. As a result, many American media outlets such as the “New York Times” have included special guidelines for their journalists as to how to call those camps.

In the beginning of 2018, The Polish Instituted of National Remembrance (IPN) introduced what is called the Holocaust Law. The law as it went into effect in March imposed jail sentences of up to three years for anyone who used the phrase “Polish death camps” or suggested “publicly and against the facts” that the Polish nation or state was complicit in Nazi Germany’s crimes.

After an outcry from the US and Israel, the law has since been changed to the offence being a civil and not a criminal one.