There is a life-and-death struggle with Brussels and the Soros network.

József Szájer, the Hungarian MEP who resigned his mandate after being caught at a Brussels house party, was very likely the target of secret services, László Földi, former director of the Hungarian Information Office (the Hungarian equivalent of the CIA) told conservative daily Magyar Nemzet in an interview .
“It is probable that the Hungarian politician fell victim to an intelligence operation, who, as a target, obviously contributed to getting himself in such a situation. This was a fatal mistake on the part of József Szájer,” Földi said, adding that the coronavirus epidemic provided a good opportunity and appropriate conditions for the operation.
“After the curfew was ordered, the plan was put in motion. From then on, all they had to do was persuade Szájer to attend the gathering,” he said. “All the intelligence services quite obviously knew his sexual orientation and what company he kept. Presumably, an acquaintance moving in similar circles — fulfilling an assignment — simply invited him to the party. They exceeded the permitted number at the gathering, so the violation of the law took place immediately. As Szájer tried to escape and was on the street, he had already violated the curfew.”
“That must have been a desperate attempt on his part,” Földi said regarding Szájer’s escape through a window. “What is very important, however, is that drugs are involved in the case. If we accept Szájer’s statement that he did not know about the pills, then someone put the illicit drugs in his backpack. So the participants in the operation wanted to ensure their success.”
While on the surface, the case was a simple police raid on a banned gathering, Földi said the circumstances would indicate political motive.
“Current politics indicate this is the case. After all, as I have already mentioned, Szájer’s sexual orientation has been a known fact to all intelligence agencies for many years. The timing of the action, and the way the details of the case were leaked to the press, make it completely clear to me what happened,” Földi said.
He pointed out that due to the Hungarian-Polish veto, there is a huge conflict of interest between the individual member states of the union. This explains the timing.
“Oddly enough, the media made it easy only to identify Szájer. However, the identities of several other diplomats attending the party remain unclear. Ensnaring him was a very serious warning from somewhere to be careful, we know a lot about you,” he said, adding that since his sexual orientation was well known, that in itself could not have been grounds enough for making him a blackmail target.
“But under the circumstances, due to the restrictive measures imposed because of the epidemic, the politician committed a violation of the law, which was conducive to character assassination. And let us not forget that Fidesz, in the person of József Szájer, lost its best-equipped politician in the EU, which is a huge blow to the party. There is a life-and-death struggle with Brussels and the Soros network. We live in a period when you can’t make mistakes. We must learn from the successful elimination of József Szájer.”
Title image: László Földi, former director of the Hungarian Information Office. 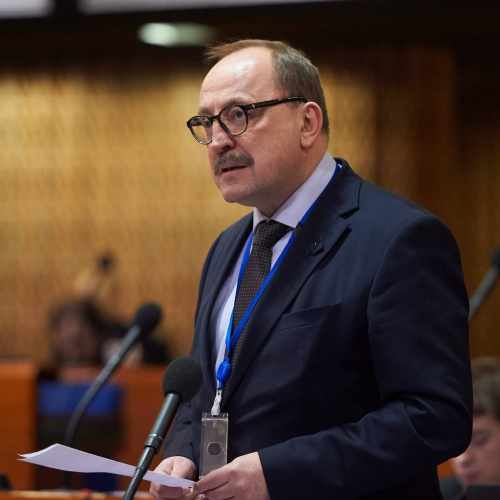