Poles sign a new LNG contract with the Americans

Polish energy giant PGNiG has signed a long-term contract for purchasing LNG gas with US company Cheniere Marketing International. The contract is for 24 years and the gas will be delivered via the Lech Kaczyński LNG terminal in Świnoujście in the north-west of Poland. 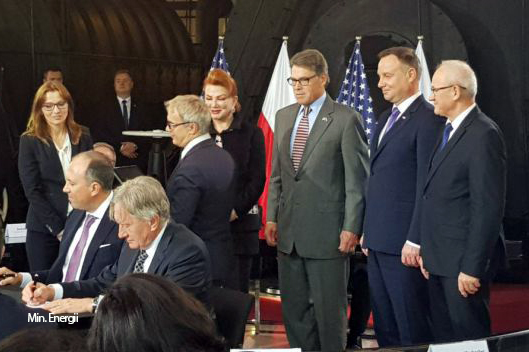 President Andrzej Duda expressed his pleasure at this development.

“I am very pleased that this contract has been made with a US supplier. Poland is cooperating closely with the US on security matters. There are US military units present in Poland. I am happy to see this cooperation being extended to energy security. I can say that this is the kind of transatlantic partnership with the US that President Lech Kaczyński dreamed of.”

Poland’s President also mentioned that Poland was expanding its LNG terminal in Świnoujście and participating in the Baltic Pipe project that will bring gas from Norway to Poland via Denmark. He underlined that this capacity would enable Poland to help its neighbors diversify their supplies and thereby achieve energy security.

The US Energy Secretary Rick Perry said that Poland was taking “center stage” in US plans. He praised the country for its grasp of the significance of diversification for energy security.

According to Secretary Perry the contract Poland is signing for the supply of LNG gas is a “signal sent to the whole of Europe to build energy security via diversification of supplies”.

According to PGNiG the contract is based on conditions and prices which are fully satisfactory for Poland. The company’s CEO says that the prices on LNG contracts his company is negotiating are 20-30 percent lower than those covering gas supplies from Russia.