Many, including the Slovak prime minister, are questioning Lučanský’s death

After the suicide of former Slovak Police President Milan Lučanský in pre-trial detention, several forms of disinformation, hoaxes, conspiracy theories, and also legitimate questions have arisen. In fact, the case remains the main topic in Slovak politics. Doubts and conspiracy theories about the death of Lučanský spread mainly on social networks.

Milan Lučanský died on Dec. 30 of injuries caused while he attempted suicide in a detention cell in Prešov the day before. Two weeks before the suicide, Lučanský injured his eye in the detention cell while falling. Even then, some media outlets speculated about an attempted suicide, which was refuted by Lučanský himself and the subsequent ministerial inspection. Lučanský was put behind bars in order to keep him from influencing witnesses or people who were also accused in the Judas police operation . Within the operation, police investigated alleged bribes from 2018 and 2019. The former police president faced allegations of corruption and abuse of power. Entrepreneurs were also allegedly able to buy impunity from the police. Several police raids, which took place at the end of last year and put high-rank officials of the intelligence service, police, prosecutor’s office, and business behind bars provoked resentment, especially among the former ruling Direction – Social Democracy (SMER) party. It is this party that some of the defendants point at in their statements.

In December, former Prime Minister Robert Fico (SMER) claimed that the current governing coalition had made detention a political tool to punish opponents. Lučanský’s death aggravated the situation and provoked several controversial reactions from politicians and the public. There is even an increasingly popular theory about an American satanic conspiracy and unsubstantiated claims that Lučanský was threatened by the mafia. “The mafia benefits the most from Milan Lučanský’s accident as it was afraid that he would testify against it,” Prime Minister Igor Matovič wrote on Dec. 29, although he offered no evidence that the mafia was actually invovled. On the contrary, according to Fico, Matovič must take responsibility for Lučanský’s suicide. The former prime minister also blames journalists and “political servants” in the prosecutor’s office and courts. Among those who question the official version of Lučanský’s death is Ľuboš Blaha, a well-known member of the SMER party. “I can’t imagine how a person can hang himself while lying on a bed, or how he can hang himself while kneeling on it. It contradicts the curriculum of third-year physics at primary school,” Blaha wrote on Facebook, questioning the fact that Lučanský hung himself from a prison bunk bed. Some people also compare Lučanský’s death to the murder of journalist Ján Kuciak and his partner Martina Kušnírová. For example, people in groups like #AllForMilan copied the slogan “All for Jan”, which appeared shortly after Kuciak’s death in the winter of 2018. The ground for disinformation was probably prompted by conflicting reports that were published after Lučanský attempted to kill himself.

While the justice minister confirmed that Lučanský was brain-dead, the attorney general spoke of a coma. A day later, the justice ministry announced Lučanský’s death. Due to spreading rumors, on Monday, the ministry published answers to the most frequently asked questions and part of the documentation related to Lučanský’s injuries in the cell and his suicide attempt. However, some documents remained private, particularly medical reports and videos. Justice Minister Kolíková explained that the personal data protection principle applies, and the ministry also wants to protect the investigation process.

Title image: Milan Lučanský assuming the office of the Police President in 2018 (Ministry of the Interior of the Slovak Republic) 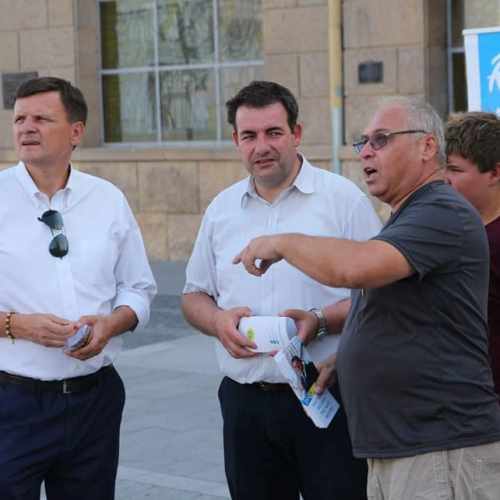