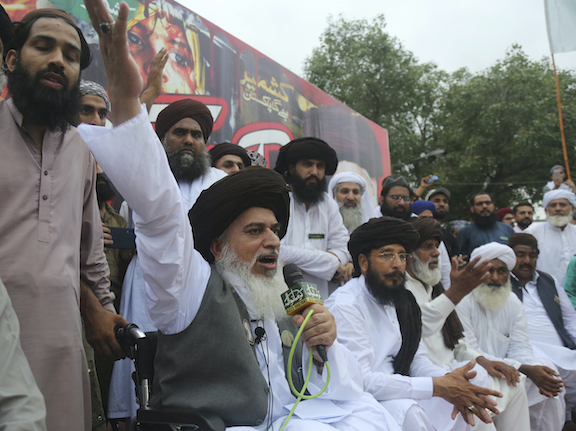 In a video posted on his official YouTube channel, Pakistani politician and Islamic scholar Allama Khadim Hussain Rizvi called on the Pakistani government to declare Jihad against “those who slander the Prophet Muhammad” in the wake of the Charlie Hebdo cartoons affairs.

“If you want dignity in this world and the hereafter, if you want the Islamic nation to survive, then declare [on the Prophet’s birthday] that Islam orders Jihad against those who slander the Prophet Muhammad. I am declaring Jihad,” Rizvi urges in the video posted on Oct. 24.

“Europe is not aware how insane certain Pakistani-Islamic political leaders are. This is the Islamic scholar Allama Khadim Hussain Rizvi who calls on Pakistani government to use the atom bomb against Europe. Pakistan is a terror state!” Dewinter wrote on Twitter.

#Europe is not aware how insane certain Pakistani-islamic political leaders are. This is the Islamic scholar Allama Khadim Hussain Rizvi who calls on Pakistani governement to use the atom bomb against #Europe. #Pakistan is a terror state! #boycotpakistan pic.twitter.com/MiTVq6J2DA

However, this was not the first time Rizvi called for Jihad on those who allegedly mock Prophet Muhammad. In July 2018, in response to a Prophet Muhammad cartoon competition, he said that if he were given “the atom bomb”, he would “wipe Holland off the face of this earth.”

“If they give me the atom bomb, I would remove Holland from the face of the earth before they can hold a competition of caricatures,” said Rizvi, according to the Times of India.

The competition of cartoons depicting the Prophet Muhammad was held by the Freedom Party of Dutch politician Geert Wilders in 2018.

Rizvi is the founder of the Tehreek-e-Labbaik Pakistan political party, which aims to fight any changes in the country’s blasphemy laws.

Rizvi is not the only Islamic leader calling for Jihad. Sheikh Issam Amira delivered a lesson from the Al-Aqsa mosque in which he said that it was a honor that a Chechen Muslim beheaded Samuel Paty in Paris. The teacher showed his class a cartoon of Prophet Muhammad in a lesson about freedom of expression, which sparked the religious extremist attack.

“When a Muslim of Chechen origin beheaded an infidel who slandered the Prophet Muhammad, people call this ‘terrorism’. Well, it is a great honor for him and for all Muslims that there was such a young man to defend the Prophet Muhammad,” he said in a video translated by the Middle East Media Research Institute (MIMRI).

Al-Aqsa Mosque Lesson by Sheikh Issam Amira: The Beheading of French Teacher Paty Is a Great Honor for All Muslims pic.twitter.com/qLhfmXrkBp

Late last month, Mahathir Mohamad, who served as Malaysia’s prime minister until March of this year, also wrote in a tweet that “Muslims have a right to be angry and to kill millions of French people for the massacres of the past”.

The Muslim world has reacted with outrage to French President Emmanuel Macron’s crackdown on Islamic extremism in the country, including with calls for boycotts against French goods. National Rally leader Marine Le Pen claims, however, that Macron has failed to address the issue of Islamic extremism throughout his term. She has called for all unaccompanied minors from France to be deported back to their country of origin, a move she says will help reduce incidences of terror in France.