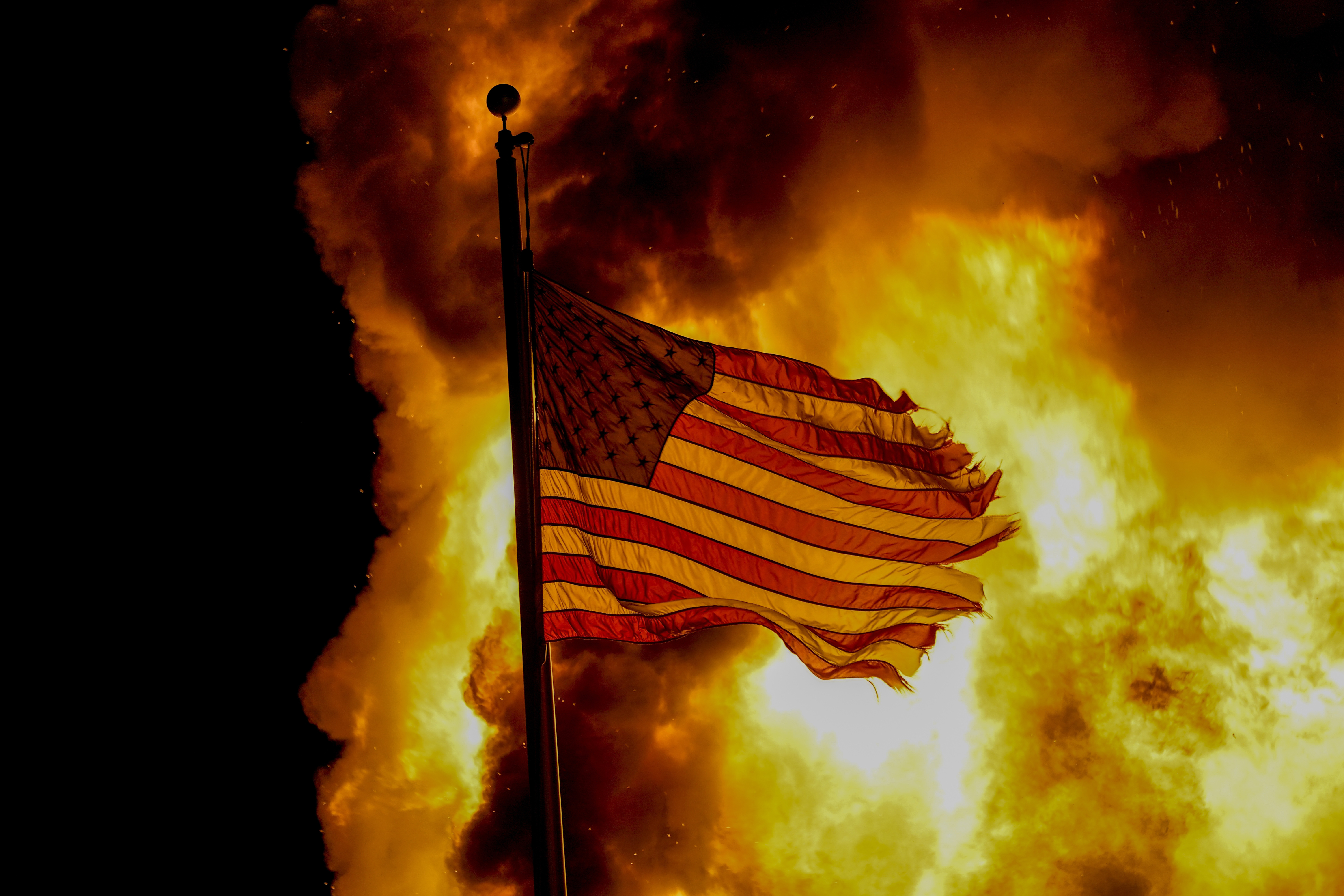 Following the shooting deaths of two individuals in Kenosha, Wisconsin, 17-year-old Kyle Rittenhouse has been placed under arrest, with footage of the incident showing him appear to run through a crowd of protesters armed with an assault rifle when he is attacked by a number of individuals.

In the video, one of the Black Lives Matter protesters trips Rittenhouse to the ground, resulting in others pouncing on him, including one man with a skateboard. In the ensuing scuffle, Rittenhouse appears to fire a number of rounds off, striking two of his attackers. The crowd then quickly disperses as gun shots from another location can be heard in the background.

Although the video shows Rittenhouse surrounded by an angry mob and him firing in self-defense, it is unclear what happened immediately before the video and police have charged him with first-degree murder, accusing him of being responsible for two shooting deaths. Rittenhouse was arrested in Illinois, where he is a resident.

The shooting was only one of two caught on video during the third night of protests in Kenosha that continued despite a curfew, with riots breaking out in multiple locations.

In the other video, a man allegedly defending an auto dealership shot a protester who is accused of trying to loot on the premises, but police have not confirmed the exact circumstances of the shooting. Some reports indicate that this shooting also involved Rittenhouse, who was being chased by a man in a parking lot who then throws a heavy object at what is believed to be Rittenhouse. Rittenhouse then allegedly turns and fires at the attacker.

The shooting incident at the auto dealership was captured by a number of citizen journalists and posted online, with the victim appearing to suffer a gun shot wound to the head. It is unclear what the condition of the victim is.

BREAKING: RIOTER HAS BEEN SHOT IN THE HEAD pic.twitter.com/l1NYqUYpD3

Before this shooting took place, the rioters were planning to burn down their “next car dealership”

Footage of the shooting in Kenosha. Armed civilian on the ground starts shooting close range as protestors approaching them.

1 person in critical condition, 2 others injured in hospital.pic.twitter.com/vMbqCy4hyD

According to an expert interviewed by the Milwaukee Journal Sentinel, Rittenhouse may have a good case in court for self-defense.

Nik Clark, president and CEO of Wisconsin Carry, a gun rights advocacy group, who instructs classes for those obtaining concealed carry permits, thinks Rittenhouse followed the principles of such courses.

“We teach to retreat when possible,” Clark told the Milwaukee Sentinel. “He’s fleeing, but the threat follows him.” He thought Rittenhouse showed restraint in not immediately shooting one of the people he later shot in the elbow after the man first halted his approach to Rittenhouse and then lunged at him.

Despite the Wisconsin National Guard being called in, the approximately 200 guardsmen were nowhere to be seen as deadly gunfire broke out between protesters and armed men guarding property in the city.

In one instance, a man is seen defending the Danish Brotherhood Lodge, a charity in the community, with a fire extinguisher. One of the Black Lives Matter protesters comes up behinds him and sucker punches him in the head, leaving the man lying on the ground unconscious and bleeding. A woman filming the incident tried to defend the man from further blows.

Kenosha, located on the shores of Lake Michigan, is now becoming another victim of Black Lives Matter protests that have spread across the country. Unrest first broke out on Sunday following the police shooting of 29-year-old Black man Jacob Blake, who suffered serious injuries. Following a struggle, Blake, who is a sexual assault convict, scrambled to enter his car, resulting in an officer firing a shot at him.

Blake had a knife in the driver side door of his vehicle, according to new information from the Wisconsin Department of Justice.

On Monday evening, protesters also threatened police officers in the cordon that protected the courthouse. According to the Associated Press, several hundred people remained near the court, shouted at the police, and lit fires. A garbage truck also caught fire.

As in other protests that have taken place in the US in recent months, Kenosha has seen a spate of burglary, assault and looting as well.

Local businesses have been burned down as the looters showed little mercy to fellow citizens who say they remain unconnected to the police shooting death of Blake.

“It’s emotionally hurtful, but we didn’t do anything to anybody. Why did we deserve it?” asked a store owner whose business was destroyed by Black Lives Matter rioters.

“It’s emotionally hurtful, but we didn’t do anything to anybody. Why did we deserve it?”

Near tears, a store owner explains how his family business of 40 years was destroyed by #BLM & Antifa arsonists last night

Rioters argue with a local business owner in Kenosha, justifying their violence. pic.twitter.com/mTjuXmShOO

A local furniture store was just broken into and set on fire in Kenosha. Here’s the moment the fire was lit: pic.twitter.com/szE0MTpY4k

Masked rioters smashed cars using bats and even broke into a local furniture store and set it on fire. Dramatic photographs and video of various parts of the city on fire have led to claims that social order is breaking down, including in other cities.

One of the videos shows, for example, Black Lives Matter protesters demand customers at a restaurant to raise their fists for Black power. When they refused to do so, they were yelled at aggressively while other protesters were recording it pointing middle fingers at them.

BLM scumbags demand that diners at restaurant raise their fists for black power. Brave young couple retains dignity, refuses. Be that couple. Don’t be the embarrassing mustachioed coward to the right who has forfeited his dignity for all time.

In another incident of looting in the Boost Mobile, a woman is heard cheering as she steals a phone case.

“I got the phone cases!” A woman cheers as Boost Mobile is looted in Kenosha tonight #Kenosha #KenoshaRiot #KenoshaWi pic.twitter.com/OGH9tH0ZQy

The police say that the initial intervention involving Blake was in response to a domestic dispute, however, they did not clarify whether Blake was armed or why a police officer started firing. The man who shot the video from the incident said he saw Blake in a fight with three policemen and heard them shouting “Throw the knife away” before one of them fired his service pistol.

However, the man did not see the knife in Blake’s hands. For the time being, three police officers have been suspended, as is common after similar shooting incidents.

The incident was condemned by Wisconsin Governor Tony Evers. Republicans have accused Democratic politicians of hastily assessing the case.

Title image: A flag flies over a department of corrections building ablaze during protests, late Monday, Aug. 24, 2020, in Kenosha, Wis., sparked by the shooting of Jacob Blake by a Kenosha Police officer a day earlier. (AP Photo/Morry Gash)