Zemmour: France needs nationwide referendum on immigration and to take back power from unaccountable judges 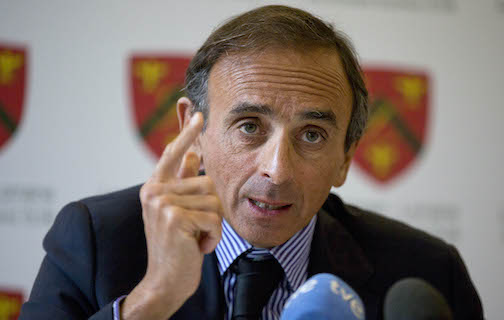 To restore the sovereignty stolen from the French people, it’s imperative that the power of judicial institutions is removed so that referendums on critical issues like immigration can be held, Éric Zemmour, a prominent French intellectual recently argued.

During comments made on the CNews program Face à Face, Zemmour — the author of The French Suicide — made the case that the only way to stop terror attacks from increasing is to transfer the immense power held by unaccountable judges to the French citizenry, so that they themselves can decide on key policy issues like immigration, Valeurs Actuelles reported.

Zemmour, a political commentator who garners some of the highest ratings on French television news programs, lambasted the French state for allowing foreigners from alien cultures to wage war against the country’s native population.

The French polemicist then proposed two ways that French people could regain their sovereignty.

“First, we must bring down the power of the judges. It is they, the judges, who’ve kidnapped the sovereignty of the people with all the supreme courts that we have: the Constitutional Council, the Council of State, the Court of Cassation, the European Court of Human Rights, and the Court of Justice of the European Communities. These are the people who decide on French policy in the place of the French government, and in place of the people,” Zemmour argued.

“Secondly, the only way to restore the sovereignty of the people is by way of the referendum, in particular on immigration. There are drastic measures that need to be taken that judges will never allow us to take. It is only the people who can be summoned to say whether they are for or against [immigration].”

When asked by the reporter about the representation of famed French leader General Charles de Gaulle in the present day, Zemmour argued that President Emmanuel Macron’s policies were diametrically opposed to Gaullism.

To return to “Gaullian policy today”, it’s of paramount importance that the independence of the French nation, the sovereignty of its people, and the authority of the state be restored entirely. Zemmour then slammed Macron’s devotion to multiallelism and globalism.

With polls in France showing citizens are overwhelmingly opposed to more immigration, Zemmour isn’t the only high profile figure in the country to express deep concern over the clear links between mass immigration and terrorism.

On Friday, former French President Nicolas Sarkozy addressed the topic as well during an interview with BFMTV, arguing that the state should “place the right to security over the duty of generosity”.

“I believe that we must thoroughly renovate our immigration law to adapt to the new context,” he said.

“It would be wise to think about a short moratorium, to use this time to consult with all the political forces, because it is a subject that concerns everyone, and to send the message to the French that we understand their concern.”

France, which has the largest population of Muslim migrants in Europe, has experienced rapid demographic change over the last decades that could result in the ethnic French becoming a minority in 40 years. Currently, approximately 400,000 migrants arrive in the country each year.