A police task force seized automatic firearms and ammunition, as well as knives and other weapons in the raid 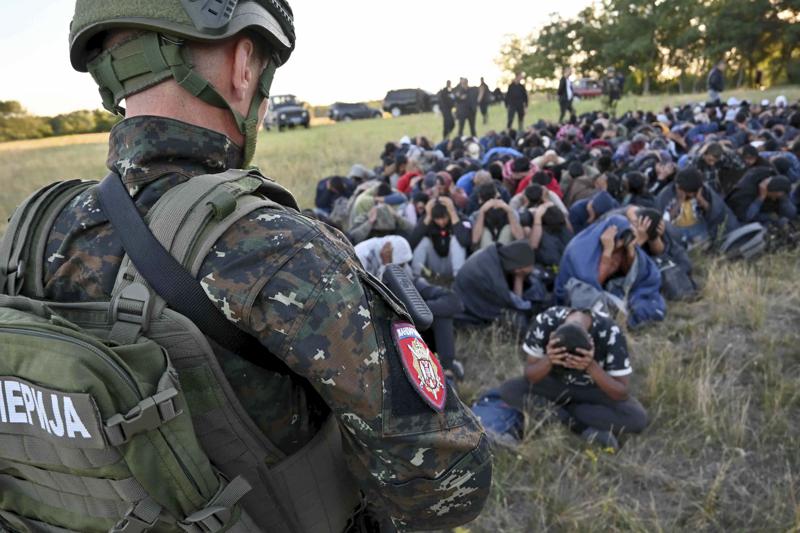 In this photo provided by the Serbian Minstry of Interior, a group of migrants detained by Serbian gendarme officers put their hands on their heads, near Subotica, Northern Serbia, Wednesday, July 13, 2022. Authorities in Serbia have detained 85 migrants near the border with Hungary, where a clash earlier this month apparently involving people smugglers left one person dead and several injured. (Serbian Ministry of Interior via AP)

Serbian police detained 85 illegal migrants on Thursday in a northern city close to the country’s border with Hungary. The men were detained in the same area where an alleged incident occurred earlier this month, reportedly involving people smugglers, which left one person dead and several others injured.

During the police operation, a police task force seized automatic firearms and ammunition, as well as knives and other weapons across the city of Subotica in the autonomous province of Vojvodina.

Six of the migrants have since been arrested by authorities, and two have been charged with serious criminal offenses. According to a police statement, the remainder remain detained on suspicion of less serious offenses.

“No criminal gang will be exist without being uncovered and dismantled and its members punished according to law,” said Interior Minister Aleksandar Vulin. “No one can carry guns in Serbia and no one can traffic in people.”

“Serbia won´t allow our way of life to be jeopardized in any way by criminals who profit on human misery and hardship,” Vulin added.

The sweep was described by police as an “action designed to curb criminal acts and offenses committed by migrants,” and the interior minister confirmed that operations had been stepped up near to the Hungarian border where smuggling gangs remain prevalent in trafficking individuals into the European Union.

“We are defending Serbia, we are defending Hungary, we are defending ourselves, but we all know that these migrants do not want to live in Serbia and not in Hungary, they are going to Germany, so when we defend ourselves now, as so many times in history, we are defending Europe, especially Germany, and this is so even if we can’t expect any recognition or gratitude at all,” Orbán said at a joint press conference with Serbian Prime Minister Ana Brnabić in September last year.

The incident earlier this month which prompted the raid involved a clash between Afghan and Pakistani gangs, during which one person was killed and seven were injured. People living in Subotica, just south of the Hungarian border, and the surrounding area remain tense due to recent events and believe they are no longer safe, reported Hungarian state channel M1.

The Serbia-Hungary route remains a popular choice of people smugglers seeking to extort economic migrants from Asia and northern Africa intent on breaching the EU’s external border before traveling west to countries such as France, Germany, and in many cases the United Kingdom.