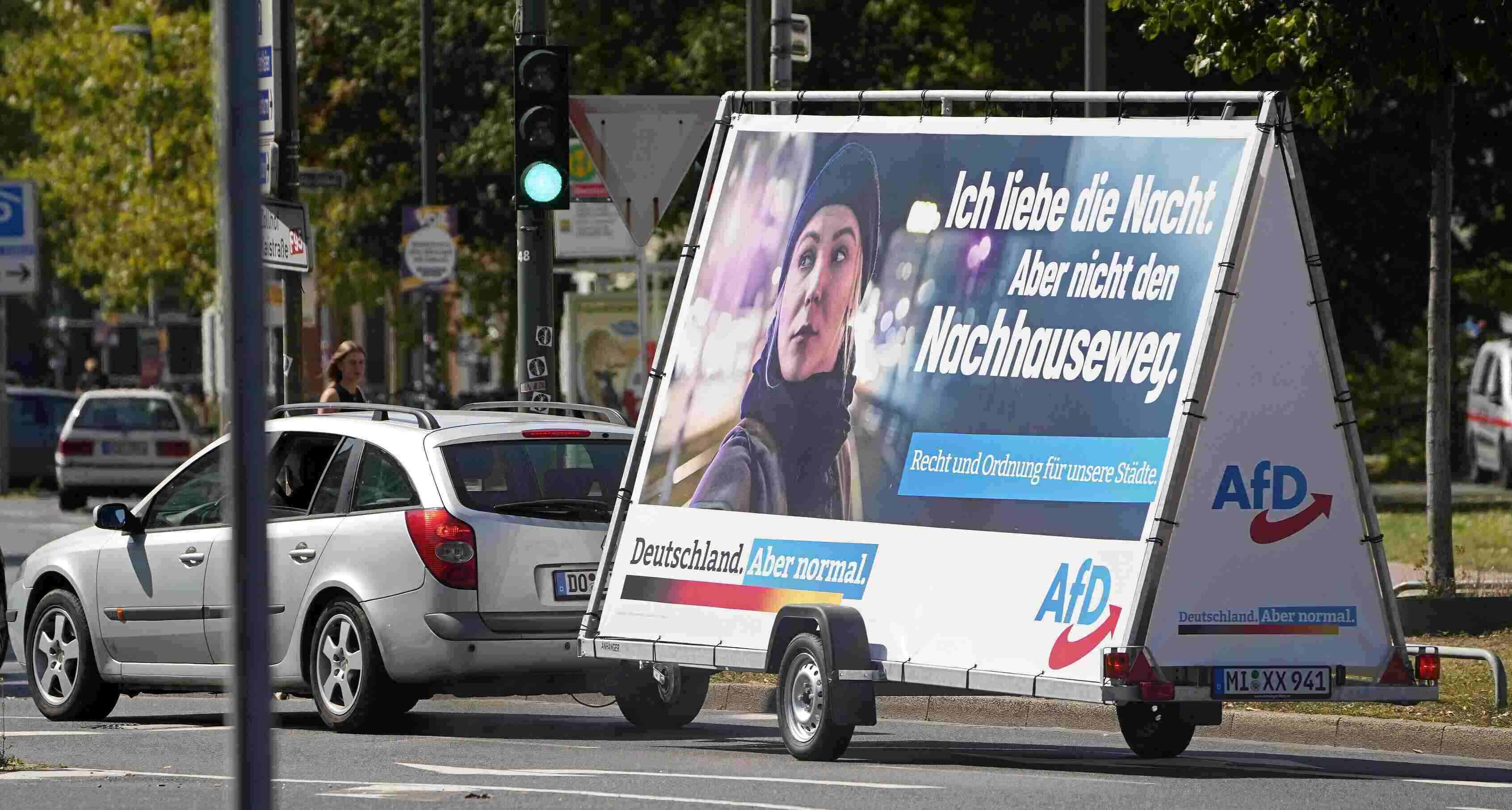 A car pulls an election poster for the right wing party Alternative for Germany, AfD, at a street in Duesseldorf, Germany, Wednesday, Aug. 25, 2021. A large chunk of the German electorate remains undecided going into an election that will determine who succeeds Angela Merkel as chancellor after 16 years in power. Recent surveys show that support for German political parties has flattened out, with none forecast to receive more than a quarter of the vote. (AP Photo/Martin Meissner)

On Monday evening, around 50 to 100 left-wing extremists marched through the Lichtenberg district in Berlin in memory of a homeless Moldovan killed in 2016. The motto of the demo was: “Against right-wing violence and for an anti-fascist neighborhood”.

As it turned out, the organizers chose the route carefully, because it also led past the place of residence of Alternative for Germany (AfD) MP Karsten Woldeit. He is the domestic political spokesman for his parliamentary group known for its conservative immigration policies, and as a result, has been targeted by the left on many occasions in the past.

When the left-wing demo arrived at his home, one of the participants with the speaker asked the crowd to show the politician what they thought of him. The group proceeded to shouted slogans like “Woldeit – Nazi pig” or “F*ck AfD”. One participant in the demonstration wrote on Twitter that he was now going into the street “where an AfD pig is looking out the window”.

Woldeit posted video of the demo that he took from his window and wrote on Twitter, “A question for the Berlin Police. A demo against me at my private apartment, where I am raising my children, is totally ok? I had thought otherwise up until now.”

Police: Freedom of assembly is a valuable asset

The deputy AfD country chief, who lives in the apartment with his children, filmed the scene. When asked by Junge Freiheit, Woldeit had this to say:

“I am for freedom of expression. I am also in favor of demonstrations against politicians. But they too have a private sphere and if suddenly there is a demonstration in front of my apartment, in which my children also live, I would like the police to intervene or change the demo route in advance.”

The AfD politician says he is certain that the police are aware of where he lives. After all, he is considered a “person at risk” and receives property protection from the State Criminal Police Office.

“I didn’t see an officer that evening, so I called the relevant department. Because I had to assume that something could happen after the demonstration.” However, the officials only replied that he should call 110 in such a case.

A police spokesman told the Junge Freiheit that freedom of assembly was a valuable asset and “the police protect the right to assemble, not the content of a demonstration.” As with every other rally reported, the possible danger was also analyzed in this case.

“The right of assembly takes precedence,” the spokesman made clear, even if it occurs in front of the private apartment of a politician.

AfD politicians are repeatedly victims of left-wing acts of violence

Woldeit sees it differently, referring to his children and the 78 crimes against himself that he counted in five years as a member of parliament. This included graffiti, feces in the mailbox, bodily harm, and insults.

In fact, no other political party is so often the victim of attacks as the AfD, especially in Berlin, as the arson attack on the car of the AfD candidate Vadim Derksen a week ago demonstrated.

Even though it was peaceful around Woldeit’s place of residence on Monday evening, other demonstrations on his doorstep might be expected. In the election to the Berlin parliament, which takes place parallel to the Bundestag election on Sunday, he is running on the third position of the Berlin AfD political list.