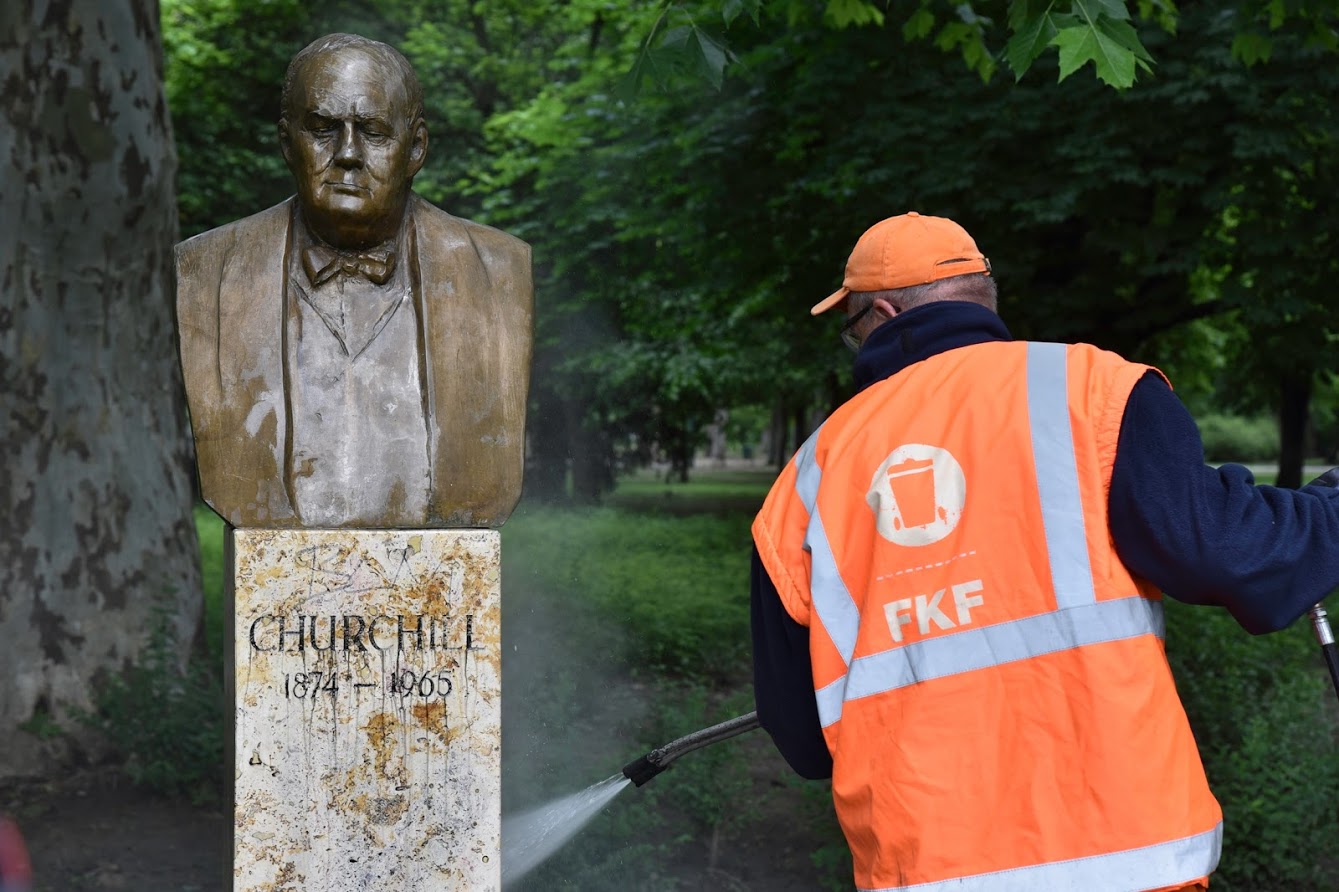 Liberal Budapest Mayor Gergely Karácsony joined the ranks of those raising their voice against the wave of statues being defaced following George Floyd protests and the subsequent growth of the Black Lives Matter movement.

“It seems that history has kicked in the door of Budapest today — more precisely, the falsification of history, or at least the total misunderstanding, and the incitement to hatred based on it,” Karácsony wrote in a Facebook post. “And I hate that from the bottom of my heart.”

In the early hours of Wednesday, unknown persons defaced the statue of Winston Churchill in Budapest’s central Városliget park, spray-painting it with “Nazi” and a Black Lives Matter logo. Churchill was instrumental in defeating the Nazis and is credited with helping save Britain from occupation by Germany during the war.

The bust, the work of Imre Varga, was erected on the alley that was also named after the British wartime leader in the park.

“It’s not my place to analyze the oeuvre of Churchill, with all its successes and failures,” Karácsony wrote. “Let this be the job of historians. I am an admirer of Churchill’s oeuvre, and if I must say a thousand times: I despise and condemn all forms of racism, and I will do so with all my might.”

He condemned the defacing as an “act indicative of crass ignorance, an act of barbarism in both the concrete and figurative sense”.

Karácsony is on record saying that he regards current London Mayor Sadiq Khan as a role model. Khan has recently created a “diversity commission” to examine whether public statues should be removed.

The highest-profile attack by Black Lives Matter protesters on a Churchill statue occurred in London earlier this month, but Prague experienced a similar attack as well, which was roundly condemned across the country’s political spectrum.

A wave of attacks on statues, public works of art as well as books, and films has raised fears that Black Lives Matter protests are leading to an erasure of history and a troubling form of censorship.

Hungary, like most other Central European nations that fell under Soviet rule after World War II, has its fair share of history with public statues. During the ultimately failed 1956 anti-Soviet uprising, one of the highlights of the early successes of the revolutionaries was the toppling and dismantling of an 8-meter high (18 meters including the pedestal) statue of Soviet Union leader Joseph Stalin in the very same Városliget Park on Oct. 23.

After the 1990 regime change, the vast majority of communist-era statues depicting Soviet historical figures or memorials to Soviet troops have been moved to a dedicated statue park on the outskirts of Budapest.

The most notable exception remains the Soviet War Memorial in downtown Budapest’s Szabadság square erected in 1946, which is protected by a bilateral treaty concerning military graveyards and war memorials.