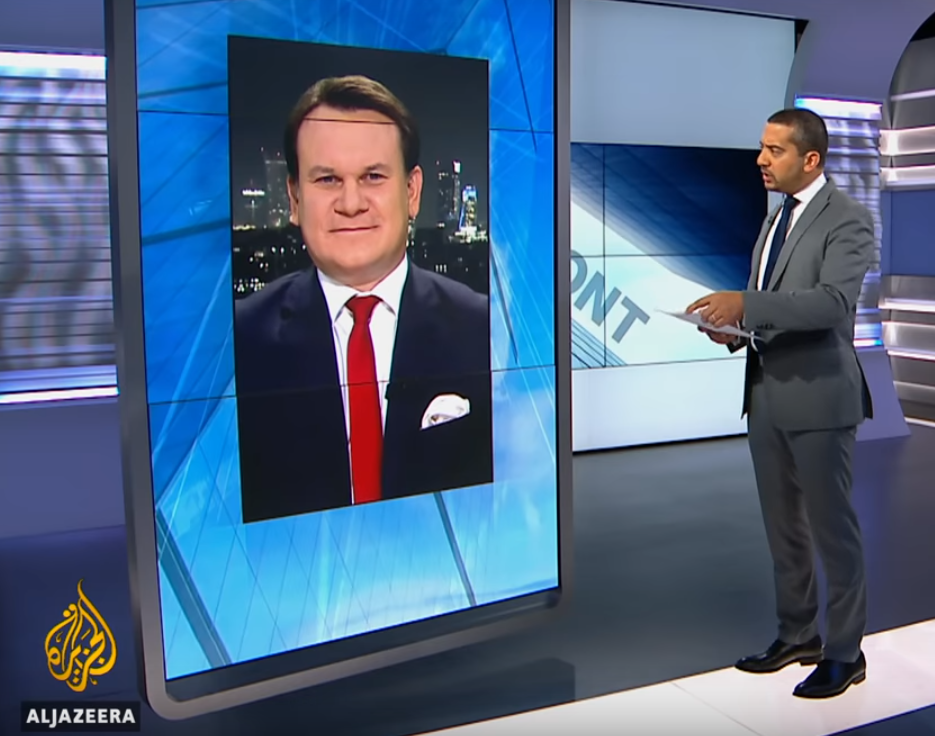 Al Jazeera is on the attack over Poland’s immigration policies, accusing a Polish Law and Justice MP during a television interview of being “racist” over his defense of Poland’s Christian and European culture.

Following Law and Justice’s election victory, MP Dominik Tarczynski was invited on to Al Jazeera’s Upfront news program, where he launched a strong defense of Poland’s policies, saying the country has a right to decide who gets to enter its borders.

“So we have a right to think about our future in the way we want to,” Tarczynski told Mehdi Hasan. “So, Christian culture, Roman law, Greek philosophers. These are the virtues for us. That’s number one. Number two: we do not want sharia law in Europe.”

Al Jazeera is owned and funded by the government of Qatar, an absolute monarchy ruled by the Al Thani dynasty since the 19th century. The country and many others in the Middle East adhere to repressive sharia law, which guides Qatar’s constitution and all of its legislation.

During the interview, Tarczynski directed his criticism of countries like Qatar who failed to take in migrants of the same religion and culture from neighboring countries.

“It has nothing to do with your color,” said Tarczynski. “It is a problem mainly of Muslims coming to Europe, I am surprised they are not going to Saudi Arabia, Qatar or any other rich Muslim countries.”

Tarczynski is not the only one raising criticisms over the richest Muslim countries refusing to take in refugees.

The executive director of Human Rights Watch, Kenneth Roth, publically embarrassed Gulf states in 2015 when he captioned a Twitter post with a photo of two crowded migrant boats, saying, “Guess how many of these Syrian refugees Saudi Arabia & other Gulf states offered to take? Zero.”

While some Gulf countries have provided funding for Syrian refugees, including for their efforts to reach Europe, these countries have been far less accommodating to refugees who want to settle on their soil. Amnesty International, echoing criticisms from Human Rights Watch, issued a report that said:

Arabs from countries like Syria have also openly criticized countries like Qatar. After 3-year-old Aylan Kurdi washed up on a Turkish beach in 2015 after drowning while trying to reach Europe, his death sparked global sympathy for refugees making the perilous journey. Kurdi’s Syrian father said that he blamed Arab countries for his boy’s death over their refusal to take in Syrian refugees, which he said led them to make the dangerous journey to Europe.

“I want Arab governments – not European countries – to see [what happened to] my children, and because of them to help people,” Abdullah Kurdi said after he buried Aylan, his 5-year-old brother and their mother, who also drowned on the same journey.

The Polish MP echoed these sentiments during his Al Jazeera interview, saying:

A clash of cultures

The Al Jazeera interviewer called Tarczynski a racist before he even had a chance to speak, but Tarczynski emphasized that Poland is a homogenous Christian nation and wishes to remain so.

“For me, multicultural society, it’s not a value … it’s not a virtue,” the Polish MP said, citing his time living in the United States and London, where he said he saw the perils that multiculturalism has brought.

The U.S. continues to struggle with poor race relations, with polarization growing and the topic of identity politics and racism dominating public discourse and journalism.

In London, where Tarczynski also lived, the city is beset with rising knife crimes and an increasingly balkanized and segregated population living around ethnic lines. Polling shows that immigration was the number one issue driving the country’s electorate to choose Brexit in the lead up to the 2016 vote.

In Austria, the government indicated in a 2016 report that of the 500,000 criminal offenses recorded in Austria, 40 percent were committed by foreigners despite this demographic making up a small fraction of the Austrian population.

In France, a survey showed that nearly half of Muslims support sharia law in the country, indicating strong support within the Muslim community to do away with European values and human rights in countries like France.

Despite Al Jazeera’s attack on Tarczynski and Poland’s Law and Justice party, growing distrust of the entire concept of immigration and multiculturalism is growing across Europe. In 2016, a survey conducted by Pew Research found that 59 percent of Europeans believed immigrants were a burden to their countries. Strikingly, less than a third said that immigration improves their countries.

Multiculturalism also has a poor track record in the Middle East itself, with countries like Syria facing internal civil wars featuring Kurdish groups, Alawites, Shiites, and Sunnis fighting along religious and ethnic lines. In countries like Germany, these rivalries do not die, with Turkish and Kurdish residents often brawling and attacking each other with machetes.

Even German Chancellor Angela Merkel said that multiculturalism has “utterly failed” in Germany as early as 2010, citing the lack of integration from the immigrant community. Her statement underlines how if even one of Europe’s most welcoming leaders has little faith in the grand experiment of multiculturalism, countries like Poland will likely avoid implementing similar policies.

In a subsequent article following the televised interview of Tarczynski, Al Jazeera claimed that the Law and Justice party’s recent second term in office could “accelerate the country’s slide towards authoritarianism.”

With its claims of authoritarianism, Al Jazeera’s funding from Qatar becomes highly relevant. The country’s media empire is owned by the country’s absolute monarchy who rule with virtual impunity.

In contrast, Poland’s Law and Justice party participated in fair and competitive democratic elections where they received nearly 44 percent of the vote, earning them the privilege of ruling the country for a fixed term, a far cry from “authoritarianism”. Poland’s ruling party had to compete in the marketplace of ideas and sell its values and ideas to voters, an idea foreign to the monarchs that own Al Jazeera.

The article also accused Tarczynski’s PiS party of being “ultraconservative”, which raises the question of how Al Jazeera would describe the sharia-run country that funds it.

Qatar’s adherence to sharia law has also led the country to be accused of numerous human rights violations. The law has led many women to be subject to public whippings for adultery. Married men and women who commit adultery can even be punished by death. Women who have a child out of wedlock are often imprisoned. It is also a country where a rape victim can be imprisoned over adultery charges while her rapist walks free.

“Homosexual activity is considered to be a criminal offense, and those convicted may be sentenced to lashings, a prison sentence, and/or deportation.”

Qatar’s ultraconservative stance on a variety of issues and its lack of democracy has not stopped Al Jazeera from attacking democratic countries in Europe that are not accommodating to Muslims immigrants. The interview of Tarczynski was hardly Al Jazeera’s only negative piece decrying the Polish government, with the media arm of Qatar writing articles claiming the country is squelching press freedom and “fomenting homophobia“.

Given Poland’s stance on Muslim immigration, Al Jazeera is likely to continue its negative coverage of the nation, and with ample government funding from oil-rich Qatar, it remains in a strong position to do so.

Poland emphasizes security for its citizens

For Tarczynski, security is just as important as culture. Countries that have pursued multiculturalism like the U.S., the United Kingdom, France, and Germany are beset with Islamic terrorist attacks that have killed hundreds in addition to dozens of attacks that have been foiled.

“If you want to be a refugee, you have to flee to the first safe country, neighbor country. Then, you have to apply, you have to prove who you are and now we are having people in Europe,” said Tarczynski. “Poland is not a neighbor of Syria. We have documents or passports with the same picture and different names. That’s just a fact from our interior minister. So, it’s all about safety.”

Tarczynski pointed to the disproportionate amount of terrorist attacks in Europe committed by Muslims as a major factor behind Poland’s immigration policies.

Poland has remained virtually free of terrorist attacks, which Tarczynski attributes to the country’s decision to not let any Muslim immigrants settle there. Unlike France and Germany, which deal with frequent attacks despite having spent millions of euros combating Islamic terrorism, Poland has remained remarkably secure in modern Europe.

Regardless of negative coverage from networks like Al Jazeera, Tarczynski indicates the current Polish government will not be swayed from changing its policies, which are based on promises it made to voters during democratic elections.

“In 2015, we promised that we would never agree to the [migrant] quota system and our promises are kept.”