Austria: Islamists threaten to murder interior minister and his family after crackdown on political Islam 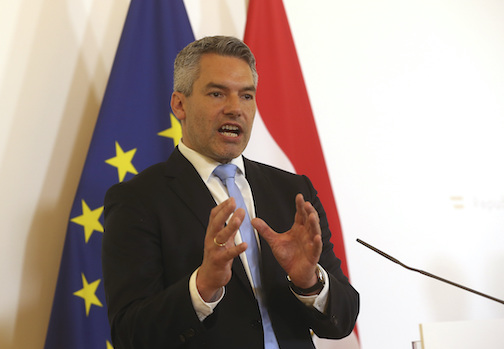 Radical Islamic extremists have threatened to murder Austrian Interior Minister Karl Nehammer and his family following a crackdown on political Islam which, so far, have seen multiple mosques closed and raids carried out against radical Islamist groups.

Due to the death threats, the interior minister, his wife, and two children have all been placed under 24-hour police protection and are being guarded by EKO Cobra, an elite anti-terrorism tactical unit, Nehammer told the Austrian newspaper Kronen Zeitung

While admitting that he had received many death threats in the past, Nehammer said that threats against his family were something entirely new. Nehammer added that neither he nor his family would be intimidated by such threats.

In the aftermath of the Vienna terror attack which left four people dead, Chancellor Sebastian Kurz on Wednesday announced plans to enact new anti-terror laws that would allow for the criminal prosecution of individuals who propagate political Islamic ideologies.

The new legislation will also give the government the power to send terror suspects to preventive detention, revoke the citizenship of convicted terrorists, strip driver’s licenses, and impose more stringent checks on the firearm purchases.

The Austrian Chancellor took to social media on Wednesday to announce the plan, writing, “In the fight against political Islam, we will create a criminal offense called ‘political Islam’ in order to be able to take action against those who are not terrorists themselves, but who create the breeding ground for it.

“There will be further possibilities for the closure of the places of worship, the introduction of an imams register… and measures will be taken to drain the financial streams used to fund terrorism, Kurz added.

Austria isn’t the only western European country to recently have its people slaughtered by radical Islamic terrorists. In France, the month of October saw two exceptionally gruesome terror attacks — both of which were inspired by Islam.

On Oct. 9, 47-year-old French history teacher Samuel Paty was beheaded by a Chechen migrant after he showed images of the Islamic prophet Muhammad during a course on freedom of expression.

Weeks later, an illegal boat migrant from Tunisia murdered three parishioners, nearly decapitating one of them, in the Notre-Dame-de-l’Assomption basilica in the center of Nice. Along with the murder weapon — a 17-centimeter knife — police discovered a Quran near the perpetrator’s cell phone at the scene of the gruesome killings.