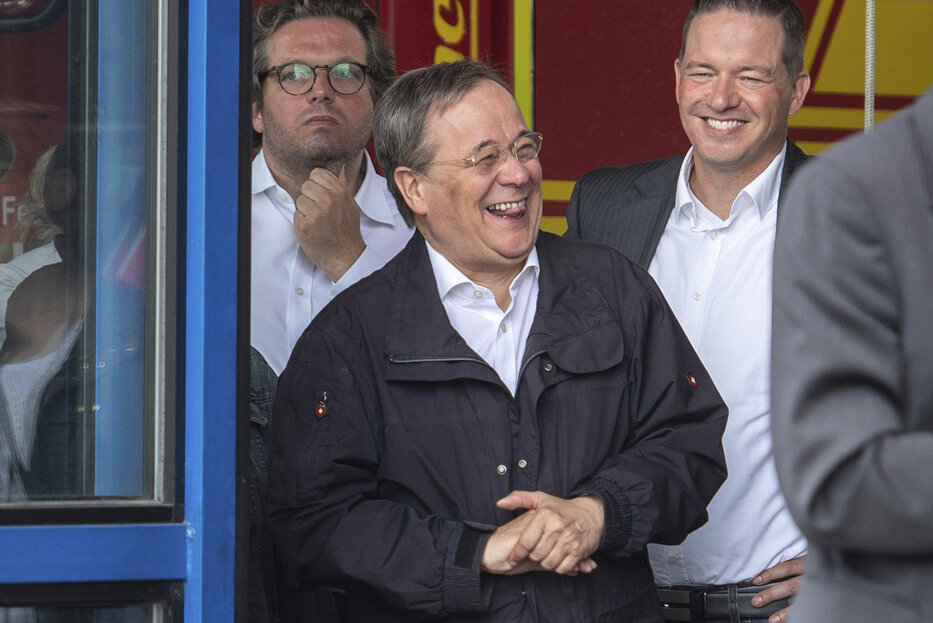 Candidate for German chancellor laughs at the site of epic disaster

Armin Laschet, minister-president of North Rhine-Westphalia, made a faux pas at a critical moment when he accompanied President Frank-Walter Steinmeier on Saturday to visit disaster-stricken areas in the east of Germany

Armin Laschet, minister-president of North Rhine-Westphalia, made a faux pas at a critical moment when he accompanied President Frank-Walter Steinmeier on Saturday to visit disaster-stricken areas in the east of Germany. While Steinmeier, keeping a serious face, promised help to those affected by floods present, Laschet talked to his colleagues a few meters behind him, laughing for about half a minute. The disaster has so far claimed at least 157 lives.

The moment did not escape the photojournalists, and Laschet’s behavior provoked indignant reactions, all the more so as he is a candidate of the conservative CDU / CSU bloc for the office of federal chancellor in the September parliamentary elections.

“I have no words. It is said that character will be revealed in times of crisis,“ commented Lars Klingbeil, Secretary-General of the Social Democrats, on Laschet’s actions. In a commentary, Focus magazine called Laschet’s behavior reprehensible, saying that at scenes of destruction, people should not show any feelings other than compassion and sadness.

The gaffe took place in the city of Erfstadt, where floodwaters washed away or destroyed several houses.

Laschet later apologized on Twitter. “The fate of the afflicted is close to our hearts. I regret all the more the impression created during the conversation. It was inappropriate and I’m sorry,“ he wrote.

The Greens’ candidate for chancellor, Annalena Baerbock, also visited the affected area. However, she went without journalists. According to her, Germany was lucky to experience few natural disasters in decades. Measures against them, according to Baerbock, were not adequately strengthened, although experts warned the office of extreme weather in connection with climate change. According to her, these concerns are underestimated.

Another FDP opposition party criticized Federal Interior Minister Horst Seehofer (CSU) for failing in civil protection because meteorologists’ warnings did not reach the people in time: “This is a major failure for which Federal Minister Seehofer should take personal responsibility.”

Title image: Armin Laschet, center, governor of the German state of North Rhine-Westphalia and the top candidate of the German Christian Democrats for the upcoming federal elections, has a laugh in Erftstadt, Germany, Saturday, July 17, 2021, while German President Steinmeier gives a press conference on the floodings in Germany. (Marius Becker/dpa via AP, Pool)