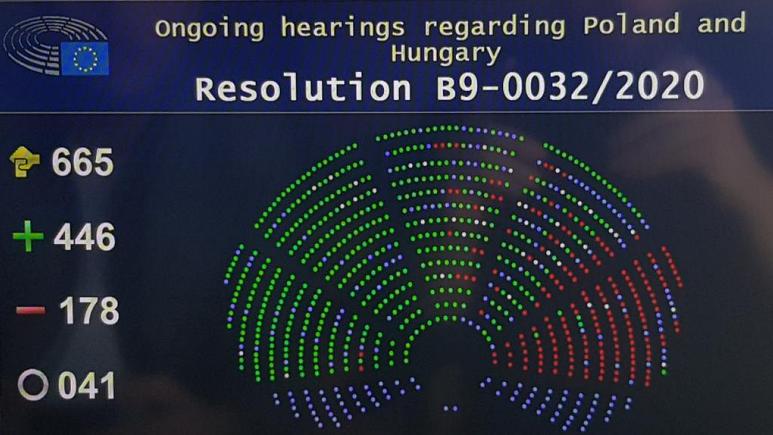 With Poland and Hungary faced with the threat of sanctions stemming from the European Union’s rule of law hearings, the Croatian presidency of the current European Council says that dialogue and not sanctions are the way forward.

The protection of the rule of law is a fundamental value of the European Union, but the Croatian presidency of the EU believes that this can best be achieved through “mutual respect”, presidential spokesman Bruno Lopandić told Euronews in a response to their query.

“Our position is that the meaning of the procedure initiated under Article 7 (1) should not be the sanctioning of countries where such weaknesses exist, but their elimination and finding satisfactory, mutually acceptable solutions through reasoned dialogue and mutual respect, which is essential for the preservation of European unity,” Lopandic wrote Euronews.

He added that Article 7 proceedings against Poland and Hungary are continuing, however, it has not yet been decided what form, content and timeline the events will follow.

“The Croatian Presidency expects to continue the proceedings initiated under Article 7 (1) TEU for Poland and Hungary,” Lopandic wrote.

“The content, format and frequency of such discussions shall be determined in consultation with all partners in the Council and the European Commission,” he added.

The Article 7 procedure was launched by the European Parliament in September 2018 against Hungary. After that, one year passed before the first hearing. In all, there were two hearings, with Judit Varga, the Hungarian government’s justice minister, denying that there was any systemic deficiency in the Hungarian rule of law or democracy.

On Jan. 16, the European Parliament adopted a resolution calling on the Croatian Presidency of the EU not to delay the continuation of the Article 7 procedure for Hungary and Poland.