Exclusive: ‘The Islamists are waging a war against us and we must take up the fight to win’ — Remix interviews French MEP Nicolas Bay

Remix News conducts an exclusive interview with French MEP Nicolas Bay, member of the executive committee of Le Pen’s National Rally (RN), vice-chair of the Identity & Democracy Group in the European Parliament, and member of the Regional Council of Normandy 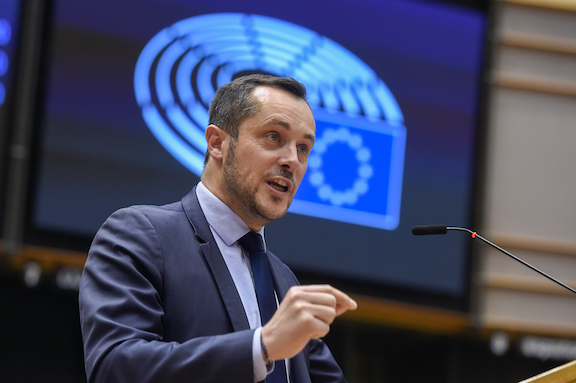 The National Rally (RN) has never won a regional election before, although it did well in the first round of the 2015 elections. You are the number one candidate on your party’s list in Normandy. How do you rate your chances in this region?

In Normandy, the game is quite open even if it is not the easiest region to win for the RN. In 2015, the list I led was nevertheless neck and neck with Hervé Morin’s list in the first round. In the second round, we were slightly behind but the left was quite strong in Normandy at the time. We were the first and only real opposition force on the regional council for those five years.

Today, Hervé Morin, even if he denies it, represents the “Macronie”. He has twenty elected officials and candidates on his list who are from the LREM, Modem, or Agir parties, i.e. from the president’s parliamentary majority. Consequently, there is a duel between his list and mine: the choice of the voters is to vote for Hervé Morin, that is to say, to continue the immobilism and the failures in many fields and to actually support Emmanuel Macron’s majority, or to vote for the political alternative that I represent.

Probably this time we can conquer regions. We have seen in the last few days that a poll placed for example Thierry Mariani in a position to win in the Provence-Alpes-Côte d’Azur region. These regional elections can be an opportunity for the French to express themselves on regional issues and also to send a very strong political signal less than a year before the presidential election. A political clarification is taking place as the outgoing “right-wing” or center-right regional presidents are all more or less “Macronized”, “Macron-compatible”, and behave as Emmanuel Macron’s auxiliaries. On the other side, only the National Rally can embody an alternative.

You mean we are seeing with these regional elections an alliance forming on the ground between the presidential party LREM and its center-right opposition LR, right?

Absolutely. Several outgoing regional presidents have Macronist elected officials on their lists. However, there are also some personalities in The Republicans (LR) who do not accept this drift and I think that this second tendency is the majority among the LR voters to whom we are reaching out. We say to people who have right-wing convictions that they are naturally entitled to join us while retaining their specificity, their background, but finally joining us on the essential, i.e. patriotism, the need to protect the French people, the need to defend our country, particularly in the face of massive immigration, communitarianism, and Islamism.

In 2015, there was clearly a “Republican front” that made you fail in the second round when the RN had come out on top in many regions in the first round. Why are the other political parties so afraid of the RN running a French region? After all, they are only regions in a rather centralized country, and they do not have that much power.

I think there are several reasons for this. The various political forces on the right and left tend to pursue the same policies when they are in office. They have become used to dividing up positions, and they have no desire for the National Rally to upset these little arrangements. In reality, there is nothing republican about this “republican front” since it consists precisely in confiscating the Republic and democracy for the benefit of a few. And finally, this supposedly republican front appears to be seriously cracked as we saw in the last municipal elections less than a year ago where it did not prevent us from winning a certain number of towns and even cities like Perpignan, won by Louis Alliot. Today, all the conditions are in place for us to conquer regions.

On your election poster, you highlight the problems of insecurity and Islamism. What do you think of the picture of France painted in the recent open letters from military personnel? Do you agree with the observation made there, which is quite dramatic?

Yes, it is a dramatic and terribly lucid report on a fractured country, on a state in full decay, on the authority of the state which has disappeared in many places, on a France which, today, is given over to barbarism, to savagery, where the law of the drug dealers and the law of the bearded men apply instead of the law of the Republic in many neighborhoods. They are not only lawless neighborhoods but also neighborhoods of non-France.

Every day, we have concrete examples of this situation with assaults, thefts, rapes, and increasingly violent acts affecting young people, and sometimes even very young people. There is this communitarianism that has paved the way for the rise of Islamism, which has struck, bloodied, and plunged France into mourning more than any other nation in Europe over the last five years through attacks, some of which were thwarted in time by our intelligence services, but many of which were unfortunately carried out.

The Islamists are waging a war against us, and we must take up the fight to win. But today there is a form of cowardice towards political Islam. This is characterized by an Islamo-clientelism that I had the opportunity to denounce a few days ago during my election campaign in Normandy, in connection with the construction in Guichainville, near Évreux, of a monumental 5,000 m² mosque with a 15-meter minaret. Such a construction is a sign of a political Islam that wants to settle and make itself visible in French society.

In reality, these military officers, who are now being criticized for having violated their “duty of reserve”, have experienced during their career, if not wars, at least situations of chaos, and they are undoubtedly more lucid than others on the situation of France today.

What are the main proposals of the National Rally to address these concerns in the event of a victory for Marine Le Pen and the RN in next year’s elections?

First, there is a downstream response. Once Islamism has developed and flourished in France, it must be methodically eradicated. The hundreds of mosques run by radicals, be they the Muslim Brotherhood, the Salafists, the Turkish Milli Görüs movement, or others, must be systematically closed. All foreign nationals on the “S” list of people posing a potential threat to public security must be expelled by withdrawing their residence permits. All those who participate in jihadist networks and collude with political Islam and radical Islam must be prosecuted and put out of action.

Then, there is an upstream response. To protect ourselves against the development of Islamism in France, we must obviously tackle the massive immigration that France continues to suffer. You have to bear in mind that during Emmanuel Macron’s five-year term, we are at a rate of over 400,000 entries per year between residence permits, illegal immigration, unaccompanied minors, and asylum seekers, many of whom are not eligible but are never deported. That is over 2 million immigrants arriving over the course of the current five-year term. We must put an end to immigration, protect the EU’s external borders, control national borders within the Schengen area and reform the Nationality Code. We cannot continue to have a situation where someone who enters France illegally sooner or later benefits from the legalization of his stay and then naturalization thanks to the laxity and generosity of France, even when that person has made no effort to assimilate.

All this is the only way to stop the development of this communitarianism that generates Islamism and terrorism.

This would be good news not only for France but for Europe as a whole. However, in the Visegrád Group countries, the fear is that if Marine Le Pen becomes President of France and the RN gets into government, it would mean the end of the European Union. What do you have to say in response to these fears?

I say to them that we actually have a real convergence of views on the European Union. We largely share the observations and aspirations expressed by Poland and Hungary in particular. We too are committed to the European idea and to the need for European nations to cooperate in order to meet the great challenges ahead and because we have a common civilization to defend. However, we can see that the European Union in its current form — increasingly federalist, increasingly centralized, in the hands of technocrats with no democratic legitimacy — has shown its ineffectiveness. There have been major crises: the financial crisis in 2008, where the EU was totally absent, the migration crisis in 2015 where the EU was totally ineffective, and today in the health crisis the EU has been totally inoperative. The bulk ordering of vaccines, for example, has put us considerably behind countries such as the United States and the United Kingdom, and we have not caught up.

Of course, we need to preserve a European organization, but we need to change everything from top to bottom. We need to change the political orientations: the European institutions must finally defend European nations in terms of migration, and also, for the Single Market, by putting in place economic protections and fighting against unfair competition. We also need to change the way the EU works with the Council, that is to say, the heads of states and governments taking back their full place, and to develop intergovernmental cooperation — not necessarily always with all 27 countries, and not necessarily always in a move towards greater integration and centralization — and we need to considerably reduce the powers of the European Commission, which today are exorbitant, even though it is made up of civil servants without political legitimacy.

That would mean changing the treaties, would it not?

Absolutely. And I think that today many countries would like to see this happen. These are the V4 countries but not only. Our Italian allies are back in government in Italy and perhaps they will be in an even stronger position in the coming months or years. I think that we ourselves can come to power in France, and I think that there are other countries that want a real change in the way the EU works and in its orientations.