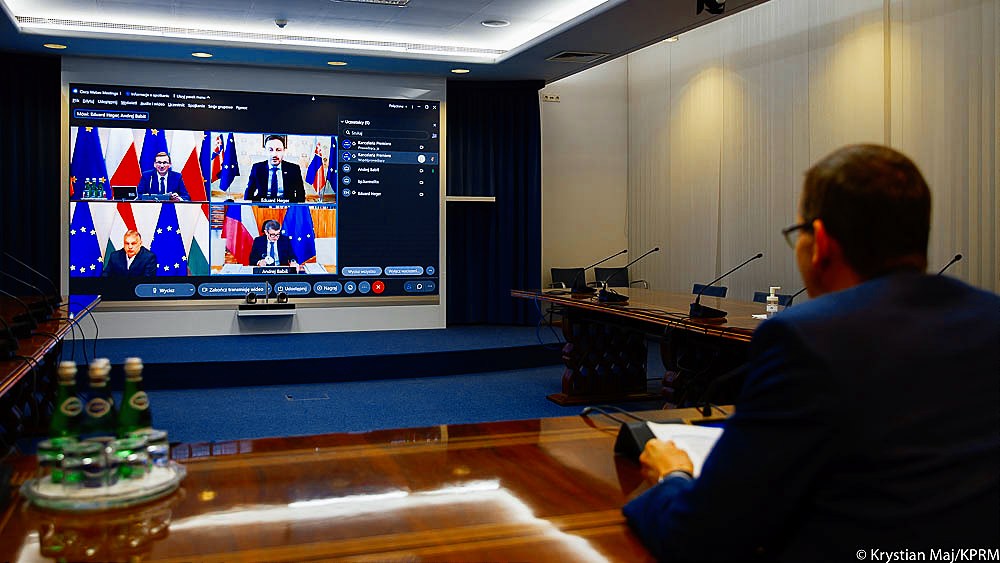 Hungary, Poland and Slovakia stand in solidarity with Czechia over Vrbětice explosion scandal

The Visegard Group (V4) nations of Poland, Hungary, and Slovakia held a video conference in an effort to show solidarity with their ally Czechia over the issue of the 2014 explosion of the ammunition depot in Vrbětice, Prime Minister Viktor Orbán wrote in a Facebook post.

As Remix News reported earlier, Czech security forces say they have a reasonable suspicion that members of the Russian intelligence agency GRU were involved in the 2014 explosion of the ammunition depot in Vrbětice in the Zlín region.

Polish Prime Minister Mateusz Morawiecki initiated an emergency meeting of the prime ministers of the countries that make up the Visegrád Group (V4) via videoconference, focusing on security in the Central European region, the Warsaw government said.

Polish Deputy Foreign Minister Szymon Szynkowski wrote on Twitter that the topics of an online meeting urgently convened under the Polish V4 presidency included Russian sabotage in the Czech Republic, Russia’s escalation of the situation in Belarus and Ukraine, and strengthening security in the Visegrád region.

“Today’s videoconference and the joint declaration of prime ministers concerning Russian acts of sabotage in Czechia shows that under Polish leadership the V4 is united in these difficult times. It shows that this is a format which actively works and can quickly react to the shifting and challenging international situation,” he said.

The prime ministers also discussed how to work together over the long-term, speaking of how to prevent further European dependency on Russian energy and how to convince German partners that Nord Stream 2 is a harmful project.

“We will jointly undertake further action as part of the EU and NATO to convince Russia that attacks on Western democracies and other countries come at a heavy price and that this price will increase. Our message to Russia is clear: dialogue is a better instrument to achieve goals than chemical or military weapons,” Secretary of State at the Ministry of Foreign Affairs Szynkowski vel Sęk stated.

????????Declaration of the Prime Ministers of the #V4 on the solidarity with the Czech Republic regarding recent actions by the Russian Federation➡️ https://t.co/irZ0EjWgP7 pic.twitter.com/Og5zhZAfGj

The Polish, Hungarian and Slovakian prime ministers also issued a joint statement, writing, “We condemn this deplorable act of aggression and breach of international law committed by Russia on European soil. We denounce the disproportionate measures undertaken by Russia in response to the entirely justified response of the Czech Republic to expel 18 Russian intelligence officers from its territory.”

The prime ministers stressed that their countries will not allow Russian actions to divide Europe — the V4 countries are determined to take action meant to strengthen European resistance alongside other EU member states.

In a statement issued later, Polish government spokesman Piotr Müller mentioned the expression of solidarity and support in Prague were delivered on top of expressions of solidarity from NATO, the chairmen of the five factions of the European Parliament, and Josep Borrell, the European Union’s high representative for foreign affairs and security policy.