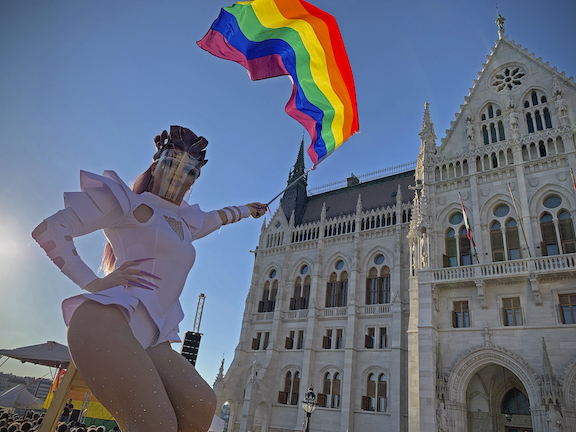 Thousands of radical left-wing liberals took to the streets in Budapest on Monday to protest newly proposed legislation which, if passed, would ban the dissemination of pornographic, transgender, and homosexual content targeted at minors.

The legislation, tabled last Thursday by Hungary’s ruling party Fidesz, is expected to be approved this week, and will amend the currently existing pedophile law. Once passed, any pornographic made available to anyone under the age of 18 “as well as content that depicts sexuality for its own sake or promotes or displays deviations from the identity of the sex of birth, gender, reassignment or homosexuality” will be prohibited, Index reports.

Fidesz MP Gabriella Selmeczi, while responding to left-wing critics across Europe and North America who’ve decried the legislation as discriminatory, homophobic, and anti-liberal, argued that “true liberalism is when children are left alone with questions about their sexual orientation until the age of 18.”

The new law comes amid the so-called “Pride Month”, where parades celebrating LGBT people commence across the globe, and large multinational corporations change their social-media insignias to rainbow-colored logos to express their support for the community.

“This family has two mommies, they love each other so proudly, and they all go marching in the big parade!” the Nina West cartoon character sings into a microphone adorned with the image of a raised fist.

“All families are made differently they love each other so proudly,” West sings. “Love is love is love you see, and everyone should love proudly.”

A week after the Blue’s Clues video was released, Nickelodeon continued its promotion of Pride Month to young children in another video featuring drag queen Nina West, who sings about the meaning of each color of the pride flag.

“Every color on the pride flag is a symbol in the sky. And I’m proud to be me every time that I see that pride flag waving high,”

“Red means life, because living is a gift. Orange means healing, and we have to persist in working to heal the world, and healing ourselves,” the drag queen continues. “Yellow means sunlight because you’ve gotta shine bright. Green means nature, and we’ve gotta fight to keep our earth a thriving home for life.”

Nina West, whose real name is Andrew Levit, goes on to point out that the colors of the flag represent various skin colors, as well as transgender individuals.

“Baby blue, pink, and white represent transgender people, because every letter in LGBTQ+ is equal, and black and brown represent the queer and trans people of color,” she sings.

It is unclear how the new Hungarian law would treat this kind of content, but it is clear that conservatives in the Hungarian government have the goal of having children in the country exposed to similar products.