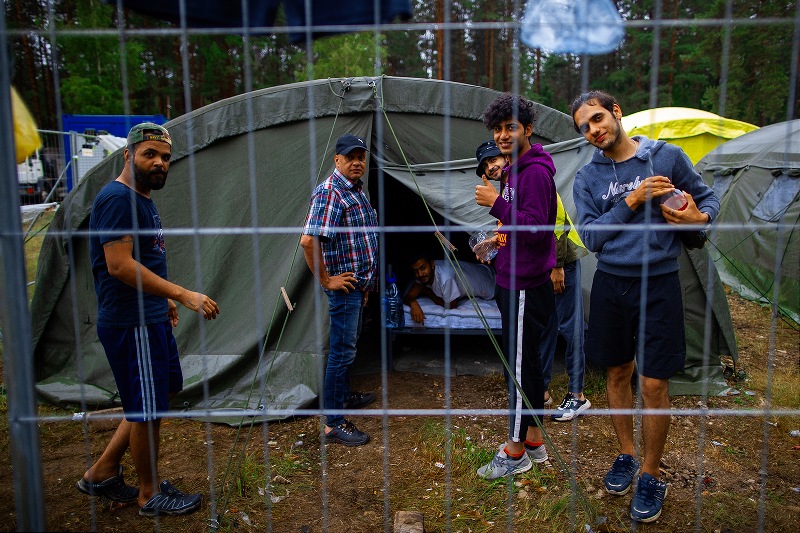 Migrants pose in front a tent at the newly built refugee camp in the Rudninkai military training ground, some 38km (23,6 miles) south from Vilnius, Lithuania, Friday, Aug. 6, 2021. Belarus' border protection agency said Friday that it tightened control along its border with Lithuania to prevent Lithuanian authorities from sending migrants back to Belarus. (AP Photo/Mindaugas Kulbis)

Lithuanian parliament passed a draft bill concerning the construction of a 500-kilometer fence on the Lithuanian-Belarusian border in an extraordinary move. According to the bill, the fence will be finished within 2 years and will cost EUR 150 million.

Prime Minister Ingrida Simonyte underscored that the bill being a separate and special project emphasized its uniqueness and importance.

The fence will be comprised of two elements. The first is concertina wire, which will be layered on three levels in the shape of a pyramid. The second element is a Y-shaped fence at the top of which concertina will be installed. Parts of the fence will also be dug in.

The project will be financed from the state’s budget, but there is also the possibility that it will receive EU funding.

The decision to construct a fence on the border was made due to the rising migration crisis, which Lithuania has been facing since the end of May. Over 4000 illegal migrants have entered Lithuania in 2021, whereas only 81 were detained in 2020. A total of 700 migrants have been turned back just in the last week.

Vilnius believes that the influx of migrants is a result of Minsk policy, which is a response to EU sanctions and Lithuanian support for the Belarusian opposition.

Since last week, an ordinance has been enacted by the Lithuanian ministry of the interior which permits the Border Guard to turn back illegal migrants. They are then guided to legal border crossings or diplomatic centers.