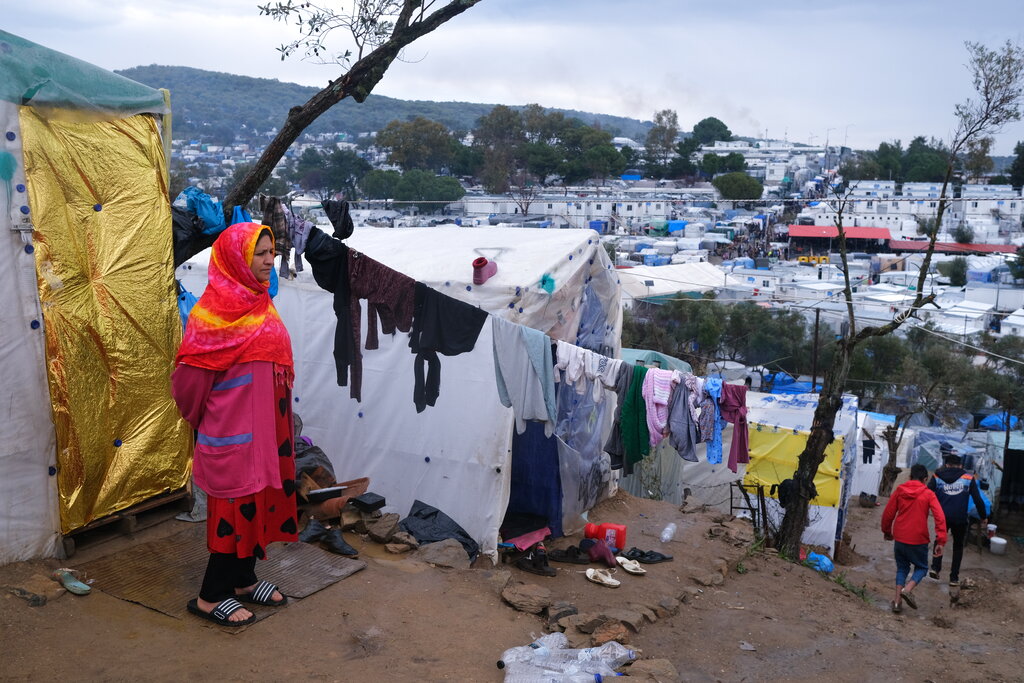 FILE - In this Wednesday, March 11, 2020 file photo, a migrant stands next to their makeshift tent outside the perimeter of the overcrowded Moria refugee camp on the northeastern Aegean island of Lesbos, Greece. Since well over 1 million migrants entered the EU in 2015, most of them refugees fleeing conflict in Syria, the world's biggest trading bloc has spent vast sums of money to help ensure that migrants no longer set out for Europe whether by arduous overland treks or dangerous sea journeys. (AP Photo/Aggelos Barai, File)

At least two-thirds of Syrian refugees of working age need partial state support, according to the BA report. This rate is 43 percent for Afghan refugees and 37 percent for Somalis.

“We still have a lot of work to do in the field of integration,” said Mathias Middelberg, a member of the CDU/CSU’s parliamentary group for domestic affairs, in response to the report, adding that more should be done for those already here instead of supporting the further intake of low-skilled or unskilled immigration.

The German authorities still do not consider Syria a stable country, and to this day they accept asylum applications from there. According to the UN High Commissioner for Refugees, some 1.1 million immigrants have arrived in the European Union from Syria since 2011, of which approximately 600,000 are in Germany. Syrians are eligible for state aid under Hartz IV labor market reform. The aid has risen to €446 per month per person this year, an increase of €14 from the last amendment of the support framework in 2016. Spouses of beneficiaries can receive €401, with €143 for children aged 14-17, €309 for children aged 6-13, and €283 for children under five.

In all categories, the monthly amount has increased this year, so that a five-member family with one child from each of these categories is entitled to €1,812 per month from the German state.

The benefit is granted even if the claimant works but still lives below the subsistence level. This is confirmed by the 2020 Labor Market Report, which states that a large percentage of Syrian refugees can participate in the Hartz IV system, partly due to a lack of appropriate qualifications and lower income tiers. René Springer, a member of parliament for the opposition anti-immigration AfD party, said the number of foreigners should be reduced to zero in the Hartz IV program.

In general, in the first year of their stay in Germany, the unemployment rate among refugees has always been high, migration and integration expert Panu Poutvaara told German newspapers. A fellow at the Ifo Institute for Economic Research added that during the coronavirus epidemic, many refugees in low-skilled jobs lost their jobs due to limited opportunities to work from home.

In light of the the ten years of the Syrian conflict, refugees do not appear to be able to return home soon, and according to the European Asylum Support Office (EASO), tens of thousands of Syrian refugees have applied for international protection to the European Union in the first two months of this year. According to a survey published this year by the German Federal Institute for Population Research, nearly 65 percent of Syrian and Eritrean refugees in the country are satisfied or very satisfied with their lives in Germany, and few feel “socially isolated”.

Title image: A migrant stands next to a makeshift tent outside the perimeter of the overcrowded Moria refugee camp on the northeastern Aegean island of Lesbos, Greece. Well over one million migrants have entered the EU since 2015, most of them refugees fleeing conflict in Syria, and the world’s biggest trading bloc has spent vast sums of money to help ensure that migrants no longer set out for Europe, whether by arduous overland treks or dangerous sea journeys. (AP Photo/Aggelos Barai, File)