President Zeman supports the “law of the year”. 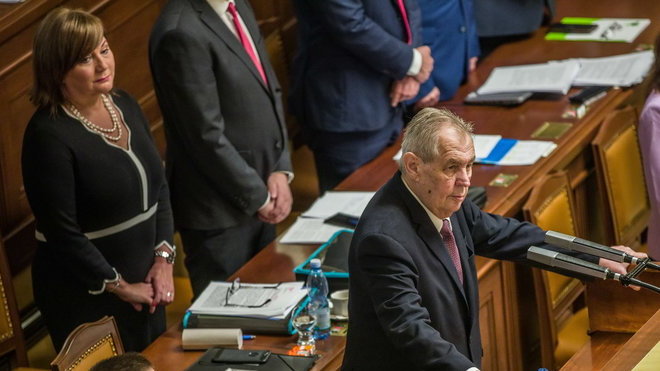 The Czech Chamber of Deputies approved the draft budget in the first reading despite the reservations of right-wing opposition parties, which did not support the proposal.

When draft budget bills are typically under discussion, both the media and politicians commonly refer to these budgets as the “law of the year” to underline their importance. As a part of the Czech tradition of the president opening negotiations on the “law of the year”, President Miloš Zeman came to the Chamber to deliver a speech about the draft on Wednesday shortly before it passed.

In his speech, Zeman criticized tax exemptions. According to Zeman, the Czech economy has reserves of CZK 318 billion (€12.5 billion), which could be used only if the tax exemptions were lifted. For example, this year the government managed to abolish the exemption for gambling winnings taxes, but Zeman would welcome the abolition of all exemptions. He said he appreciated the efforts of Finance Minister Alena Schillerová, who plans to cancel tax exemptions worth several tens of billions of crowns.

Zeman also criticized subsidies for renewable energy sources, especially solar energy, which he thinks are too high. According to Zeman, introducing a solar tax or reducing the purchase prices of solar energy could be a solution. Zeman believes that such measures would bring savings amounting to several billion crowns. The Czech president also said he hopes that the Czech Republic will not succumb to a “climate mania” as Germany, which shut down nuclear power plants and switched to expensive energy sources.

Zeman said he had  “friendly objections” to some portions of the bill but promised to sign it if the lawmakers approved it.

According to the government, the main priorities of the budget are increasing pensions, salaries of teachers, parental allowances, spending on research and development, and support for sports and athletics.

Prime Minister Andrej Babiš was not present at the hearing as he attended the ascension of Emperor Naruhito to the throne in Japan.