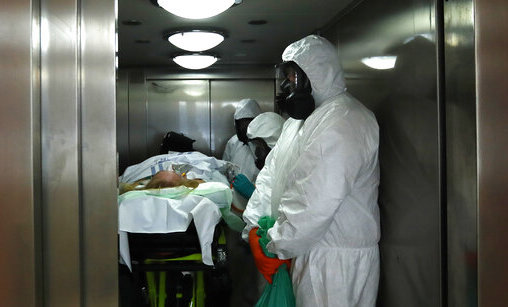 Amid growing cases, France, Germany and the United Kingdom have announced quarantines nationwide for at least a month, with measures that are almost as strict as those imposed in March and April. Portugal has imposed a partial lockdown, and Spain and Italy are tightening restrictions. Europe has reported more than 1.6 million new cases in the last seven days, almost half of the 3.3 million reported worldwide. In addition, more than 16,100 deaths have been reported in the last seven days, an increase of 44 percent over the previous week.

For every 10,000 people in Europe, more than 127 cases of coronavirus have been reported and about four people have died. In the United States there were 278 cases and seven deaths per 10,000 inhabitants.

At the regional level, Eastern Europe has almost a third of all cases reported by Covid-19, the highest number of cases, while Southern Europe leads in terms of deaths, with about 32 percent of all coronavirus-related deaths in Europe, according to Reuters. Russia is the most affected country in Eastern Europe, with over 1.6 million Covid-19 infections.

Russia’s deputy prime minister, Tatiana Golikova, said on Wednesday that hospital beds are 90 percent occupied in 16 parts of the country.

Meanwhile, Stockholm, which introduced on-demand home delivery of self-administered coronavirus tests in the summer, had to suspend the scheme as with the rising number of cases the system has been overwhelmed.

“The number of people ordering home tests has increased so sharply that a queue has formed that now needs to be worked off”, the Stockholm administration said in a statement.

In related news, WHO director general Tedros Adhanom Ghebreyesus announced on Sunday that he will self-quarantine after having had contact with someone who tested positive for the coronavirus.

I have been identified as a contact of someone who has tested positive for #COVID19. I am well and without symptoms but will self-quarantine over the coming days, in line with @WHO protocols, and work from home.

Title image: The tourist spot Roemerberg square with a chain carousel is deserted in Frankfurt, Germany, early Sunday, Nov. 1, 2020. To avoid the further outspread of the coronavirus new restrictions will become effective from Monday on all over Germany. (AP Photo/Michael Probst)