According to background studies, nine out of ten schools in the Berlin district of Neukölln reported religious bullying 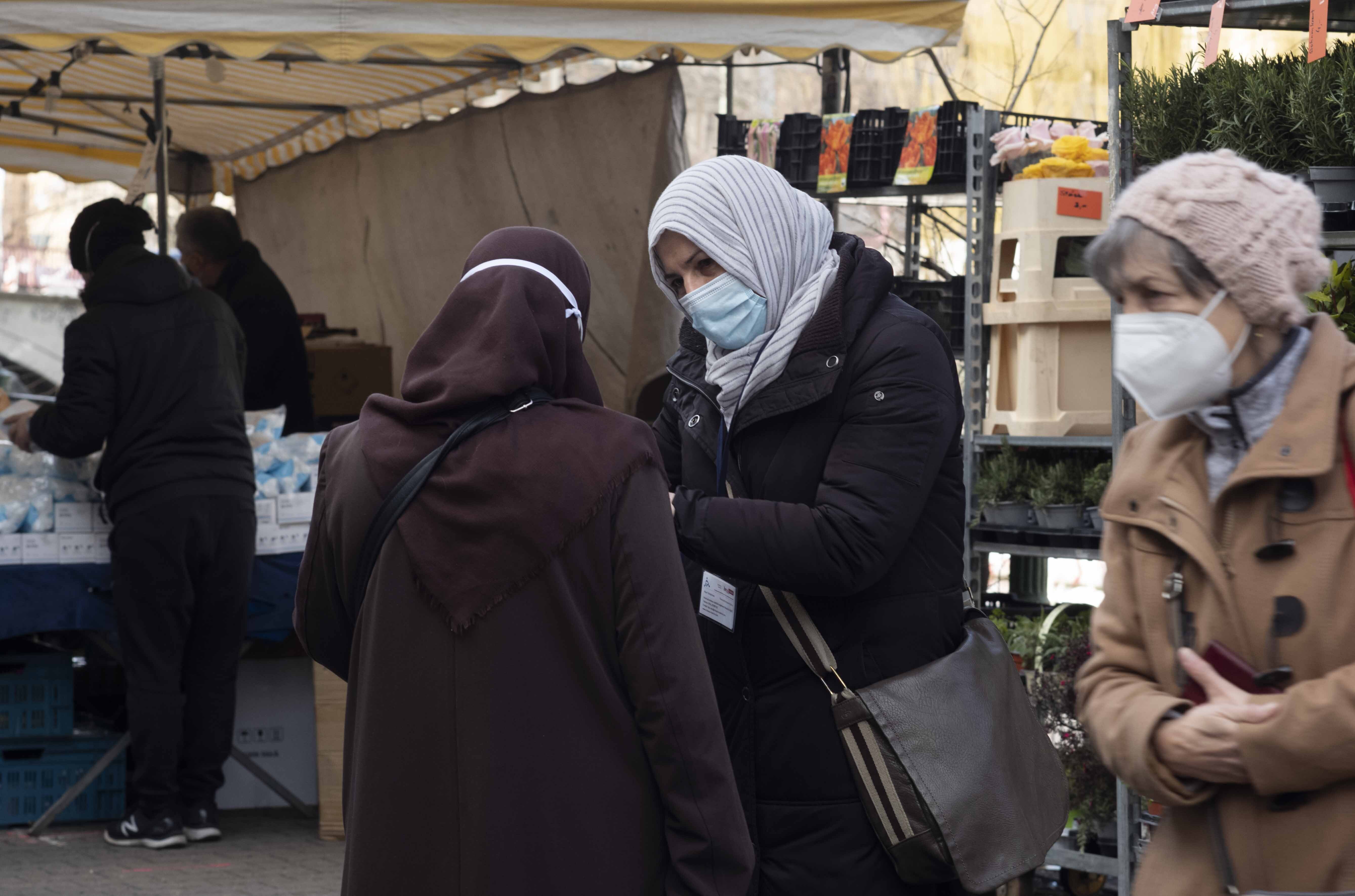 Aliye Tuerkyilmaz, center right, a member of a multilingual team of five street workers speaks to a woman about the coronavirus pandemic, in a market in Berlin, Germany, Tuesday, March 9, 2021. (AP Photo/Markus Schreiber)

A planned documentation center on religious bullying in schools in the Berlin district of Neukölln has provoked strong criticism among those who believe it will stigmatize Muslims, it has emerged.

The Association for Democracy and Diversity in Schools and Vocational Training wants to set up a place where teachers can report cases of religious bullying and receive help in dealing with it.

As reported by Junge Freiheit news outlet, behind the plan is a study by the association, which caused a great stir at the end of last year. According to the paper, nine out of ten schools in Neukölln reported religious bullying. Above all, the respondents complained about the growing influence of Koran schools and mosques on the students.

A woman of Turkish origin reported that she could not wear a short dress in the summer. “I seriously have to be careful what I wear,” she said.

One choir leader stated that only Arabs are allowed to play football. In several cases, teachers of a Muslim origin were forced to wear headscarves.

“And then they want to cut Israel out of the atlas and paint over it. That happens again and again,” a headmistress complained.

The Federal Ministry of Family Affairs, Senior Citizens, Women, and Youth had approved a three-month evaluation of the association, the Neukölln district office and the funding for this “reviewing of confrontational religious expressions in Neukölln.”

Several SPD, CDU, FDP, and AfD politicians called for permanent support for the contact and documentation center. However, the Greens and Left Party rejected this and warned against the disparagement of Muslim youths.

Several scientists and educators have now also spoken out. They criticized alleged errors in the listing or criticism of the planned contact point. The educational researcher at the Helmut Schmidt University in Hamburg, Ellen Kollender, warned in an online event on Tuesday of a possible “stigmatization” of Muslims.

CEO of the Ufuq association, which advises teachers and authorities, Götz Nordbruch, warned that it was wrong to focus only on “rigid religious ideas.” According to the DPA news agency, Nordbruch added that it made more sense to devote resources to addressing the problems of young people who experienced racism and who often did not get any answers to religious questions at school.

If 90 percent of the students in some schools have a foreign origin, they would have to find out whether they were ready “to reflect this diversity in everyday school life.” For example, when it comes to creating space for Islamic festivals in addition to Christmas celebrations.

Islamic scientist, Susanne Schröter, praised the plans of permanent support of the documentation center. “Demonstrating the alleged superiority of Islam and creating pressure on secular Muslims, as can be observed in the confrontational manifestations of religion, are part of the settled repertoire of Islamist actors,” she wrote in an evaluation report.

According to the Frankfurt Research Center on Global Islam’s chief, such behavior is also accepted because it is “associated with strength and superiority.” Where Islamist ideologies dominate, school peace is at risk and the chances of participation for students, especially from disadvantaged families, are severely impaired. Therefore, it is necessary to identify the problem and develop countermeasures.