“We want peace, but in the case of a disaster our defense will be stronger” 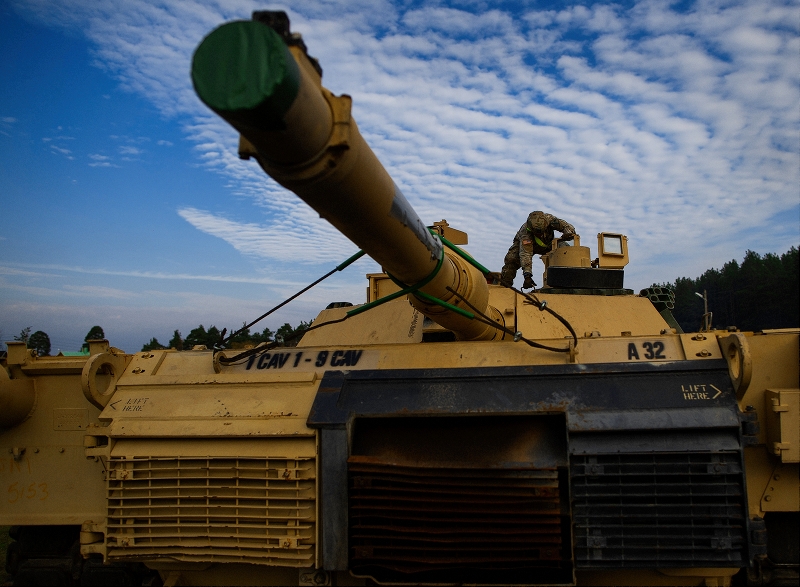 FILE - In this Oct. 21, 2019, file photo a member of the US Army's 1st Armored Battalion of the 9th Regiment, 1st Division from Fort Hood in Texas prepare to unload Abrams battle tanks from rail cars as they arrive at the Pabrade railway station some 50 km (31 miles) north of the capital Vilnius, Lithuania. (AP Photo/Mindaugas Kulbis, File)

Deputy PM for security and the head of Law and Justice (PiS) Jarosław Kaczyński announced the purchase of M1A2 Abrams SEPv3 tanks from the US by the Polish Armed Forces. The purchase will be large enough to form at least four full battalions of tanks and establish a powerful force in Poland.

Kaczyński emphasized that the Polish government is using the “if you want peace then prepare for war” rule when it came to modernizing the Polish army.

“We want peace, but in the case of a disaster our defense will be stronger,” he noted.

Kaczyński explained that the final phase of the project to seriously develop and strengthen the Polish armed forces is being outlined. The current times, situation and area in which Poland is located demands this modernization, despite it being very expensive.

Minister of Defense Mariusz Błaszczak stated that the purchased tanks will be in their best equipped form and will be battle tested. He added that the tanks were constructed as a countermeasure to most modern Russian tanks and that the Polish army will have access to them starting 2022.

“We are strengthening Poland’s defensive capabilities very quickly. This is a response to the challenges we are facing when it comes to international security. Our goal is to deter a potential aggressor. We know where this aggressor is and what threats are possible,” he said.

Błaszczak also assured that the purchase of the Abrams tanks will not come at the cost of other military modernization programs.

In recent days, Polish media has speculated around the Polish Defense Ministry’s decision to purchase American tanks for the Polish armies. According to unofficial information it was said that Poland wanted to purchase 250 such tanks.

Funds for the purchase have already been approved by the government. The value of the contract – including logistics and training – is estimated at almost 23.5 billion zloty (USD 6 billion), which is equivalent to the Defence Ministry’s annual spending on all new weapons systems in recent years, reports Polsat.

The M1A2 Abrams SEPv3 is the latest 2020 version of the primary tank used by the American army since the 1980s. Poland is attempting to purchase the tanks as part of the “Wilk” (wolf) program which was initiated in 2017. The new Abrams tanks are to replace the oldest T-72 and PT-91 Twardy tanks.