Polish PM: We want to promote the family at the EU level 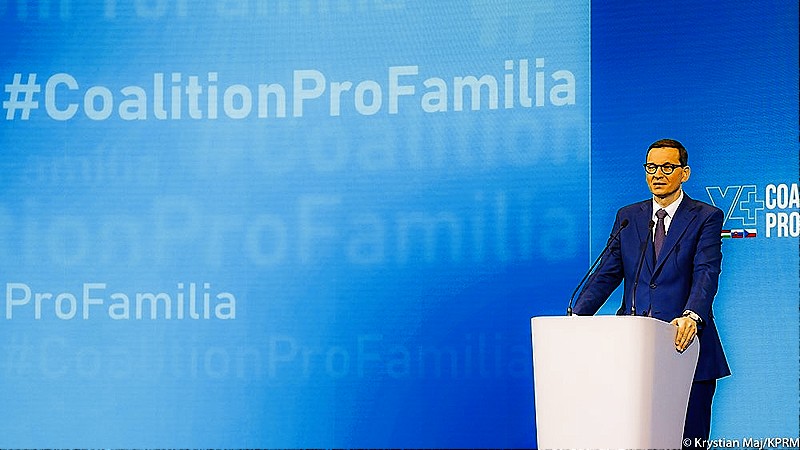 Poland wants to further strengthen the role of the family in social life, announced Polish Prime Minister Mateusz Morawiecki at the V4+ Coalition Pro Familia conference yesterday. The Polish Minister of Family and Social Policy Marlena Maląg also took part in the conference, alongside the Polish deputy ministers and social ministers of Visegrád Four countries and other EU states.

Morawiecki announced a continuation of the child benefit program which will be introduced as part of the New Polish Deal. He emphasized that the family is the absolute foundational social cell of the nation and of Europe.

“We want to promote the family as part of the European Union. This is one of the main goals of our social policy on the EU forum, which I spoke about during the summit in Porto. We put huge pressure on appropriately securing the basic needs of families in the budget and both state and international legislation,” Morawiecki stated in a Facebook entry.

The Polish prime minister noted that the United Right coalition government was able to introduce the Polish child benefit program thanks to fixing the public finance and taxation systems. More than €31 billion has reached the pockets of Poles as part of the program.

“We are proud of policy to promote families in which children can be safely raised with love and peacefully develop their talents. This is all a part of the great plan to construct an united Polish state of prosperity,” the prime minister wrote and encouraged municipalities to support families because they are the foundation for Poland’s future. As an example of this support, he pointed to public transport and institution discounts.

Morawiecki declared, that he hoped the International Family Day (May 15th) will be a symbol and signal for the world, that the family is a foundation for Poland and the change of the name of ministry of labor to the ministry of family and social policy was not accidental.

The prime minister stressed, that Poland will continue to care for the security of basic needs and goals of families within the budgets and regulations of not only the policy of the Polish state, but the entire EU as well.