Protesters clash with police in Prague over coronavirus measures

20 police officers were injured in clashes 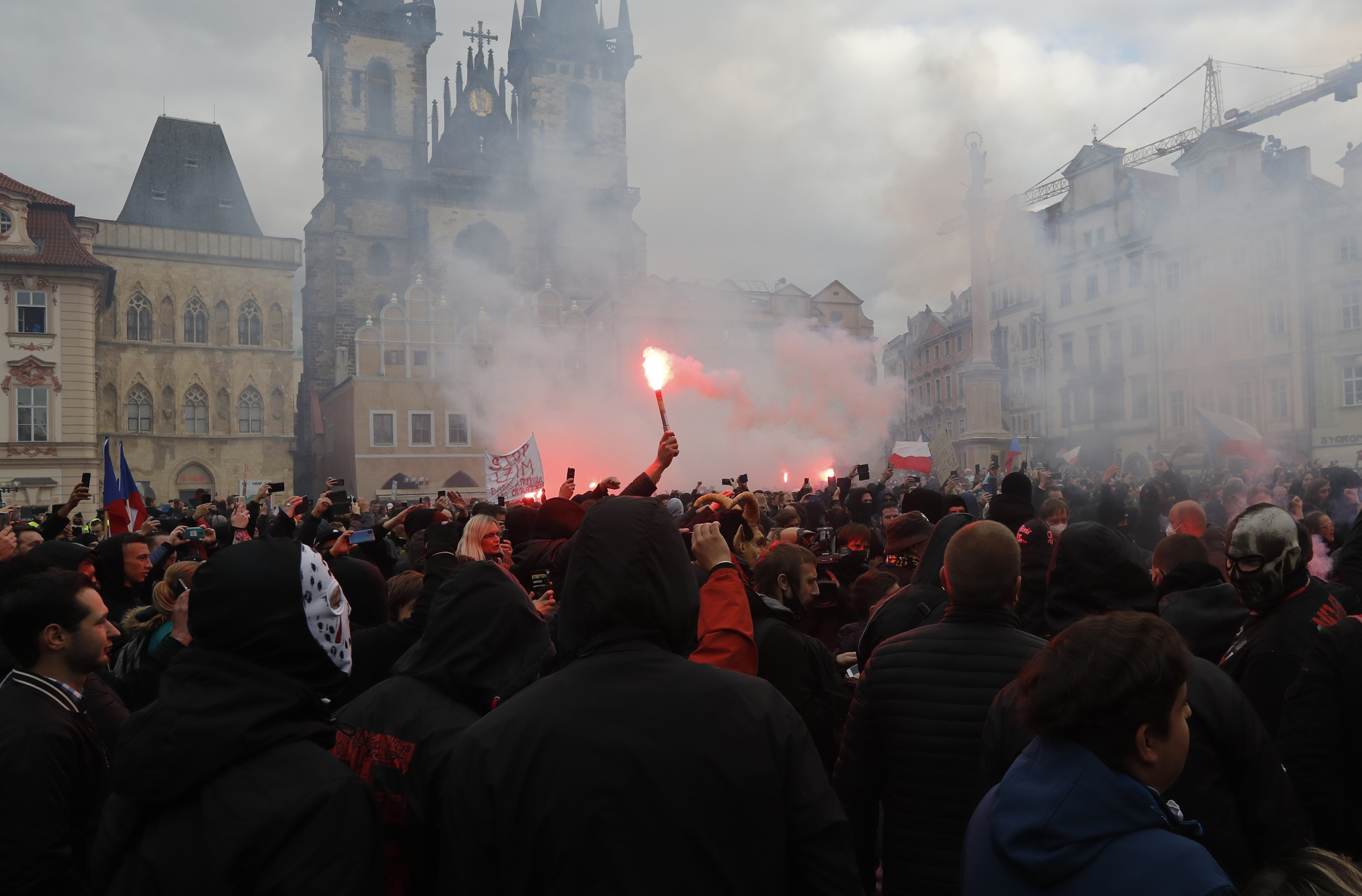 On Sunday, several participants of a demonstration against the government’s coronavirus measures clashed with police officers after the official end of the event. Police attribute the incidents to football hooligans.

Right at the Old Town Square in the center of Prague, where the demonstration took place, more than 100 people were detained, with another 50 people being arrested before the start of the rally because they were carrying weapons and pyrotechnics. Twenty police officers were injured in the clashes, several protesters suffered injuries, as well. Prime Minister Andrej Babiš and President Miloš Zeman immediately condemned the violent nature of the rally.

The protesters threw bottles, stones, trash cans, and firecrackers at the police, which, in turn, used tear gas and a water cannon against them, pushing them out with horses and police vehicles. The detainees are suspected of rioting, violent behavior towards authority, or failing to heed the police command.

Almost a 1,000 police officers, including reinforcements from the regions, were present to ensure order in the center of Prague.

Babiš said that he was shocked by how reckless and selfish some citizens are. He called for strict punishment of the attackers. He also thanked the police and said he was proud of their highly professional approach. According to Minister of the Interior Jan Hamáček, the police intervened in a completely professional manner. President Zeman then condemned the protesters who did not comply with coronavirus measures during the demonstration.

The protest was organized by the civic association Movement of Civil Dissatisfaction, which wanted to protest against government measures against coronavirus. Football and hockey fans of various clubs have announced in advance that they will join the event. The association originally stated that the program of the demonstration would be two hours long but ended the rally after an hour.

The municipality called on the organizers to do so as the number of participants exceeded 500. That is the number of people who can participate in demonstrations based on current government regulations, which apply while the state of emergency is in place. Authorities estimate that there were about 2,000 people. On top of that, most of them did not wear face masks.

At first, the demonstration was peaceful, with speakers criticizing the government and calling for changes in the cabinet. However, some participants also shouted nationalist slogans. The organizer had repeatedly urged them in vain to adhere to anti-epidemic measures, such as keeping space between groups of people. He also asked them not to be pulled into the violence and thanked the police for their approach.

Although the police could not intervene against those breaking the rules during the rally due to the constitutionally guaranteed right to assemble, officers got involved after the participants attacked the police.

The Czech League Football Association (LFA) distanced itself from the event, adding that although it wants to convince the government to reauthorize sports competitions, it chooses dialogue over force. Sports competitions are banned in the Czech Republic until the beginning of November, as long as a state of emergency applies, based on government measures against the spread of coronavirus.

Title image: Protesters light up flares at the Old Town Square in Prague, Czech Republic, Sunday, Oct. 18, 2020. Czech police used tear gas and a water cannon to disperse crowd of hundreds of violent protesters who attacked them after a rally in Prague against the government’s restrictive measures imposed to slow the spread of the coronavirus infections. (AP Photo/Petr David Josek)