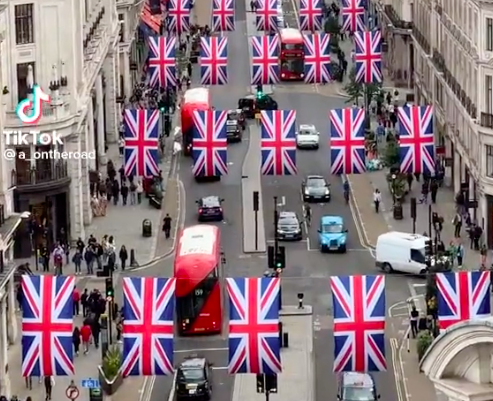 Union flag bunting has been unveiled across the United Kingdom to celebrate the Queen’s 70th year as monarch ahead of a four-day bank holiday weekend in Britain in the first week of June.

A short clip of the decorations unveiled down London’s Regent Street published on social media has drawn strong criticism from many who have accused the government of overzealous nationalism, claiming the footage would not look out of place at the rallies of the Nazi party in Nuremberg in the 1930s.

“All streets should be looking like this all the time!” stated the publisher of the video on the social media network Twitter, which prompted a pile-on from left-wing activists.

“I think Nazi Germany tried it once!” claimed Steve Bray, the infamous anti-Brexit activist who most notably held daily protests in College Green, Westminster for more than two years against the U.K.’s democratic decision to withdraw from the European Union.

“The only things that are missing are the tanks,” quipped Paul Bernal, a law professor at the University of East Anglia.

The Laurence Unboxed account, which enjoys a following of almost 12,000 followers and tweets under the banner of #FBPE (Follow back, Pro-EU), called the decorations “shameful, frankly, and historically highly unpalatable,” claiming that the Union flag had become “a symbol of Brexit and hence ignorance, racism and stupidity.”

Others described the video as a “sickening display,” choosing to post numerous photos of 1930s Germany showing prominent buildings draped in Nazi flags during Adolf Hitler’s rise to power.

“Brainwashed Britain,” lamented one social media user while another called the bunting “obscene” which gave them the “absolute fear.”

Others, however, leaped to the defense of the harmless decoration and found its triggering of anti-Brexit campaigners comical.

“Brilliant,” tweeted former Brexit Party MEP Peter Whittle, while Christian Calgie, a reporter for the Westminster-based blogging site Guido Fawkes, insisted the time had come “to have a proper conversation about how to heal the mental health of #FBPEers.

“It can’t be right that we have a good 5-6 percent of the population who look at Union Jacks in Regent Street and seriously believe comparisons to Nazi Germany are correct or appropriate,” he added.

“Remainers so hate Britain that they compare flags in Regent Street to Nazi Germany,” tweeted pro-UK Scottish blogger Effie Deans, adding: “This hatred is the reason that the UK will never rejoin the EU. It’s nearly six years folks. Time to get over losing.”

Stephen James, the original poster of the video, described the more than 2,000 abusive comments he had received as a result of posting the video as being from “an absolute sewer of UK hating clowns.” 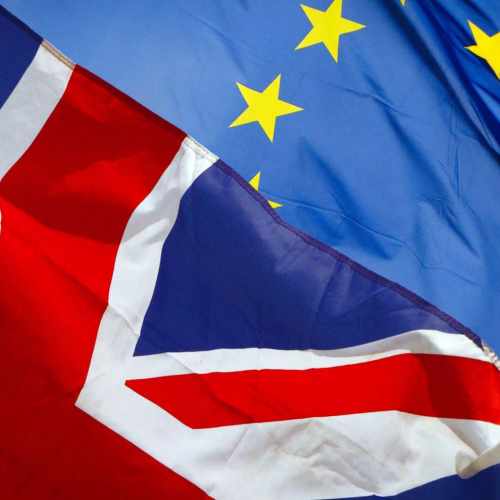