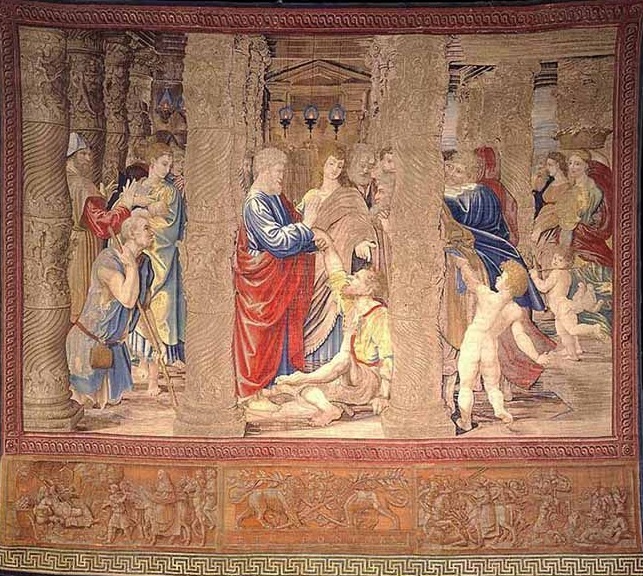 For the first time in centuries, 12 tapestries designed by the famed artist Raphael are hanging on the walls of the Sistine Chapel in Vatican City to mark the 500th anniversary of the Renaissance master’s death.

“They were conceived for this space, and so we thought it was the best way to celebrate,” explained Barbara Jatta, director of the Vatican Museums, to Reuters.

The tapestries, which were woven by the famous Brussels studio of Pieter van Aelst from Raphael’s sketches, depict scenes from the Acts of the Apostles, the fifth book of the New Testament describing the beginning of the Christian Church. Specifically, these scenes include The Stoning of St. Stephen, St. Paul Preaching in Athens, and The Blinding of Elymas.

The tapestries once hung in the Sistine Chapel at the same time that Michelangelo finished painting its ceiling in 1512.

All 12 tapestries had their silk, wool, and gold and silver threads restored in detail by experts from the Vatican Museums over the past decade.

“This place is of universal importance, not only for visual arts but for our faith,” said Jattas as she walked through the Sistine Chapel.

“So we really want to share this beauty with people, even if only for one week,” she added.

The seven tapestries, which were commissioned by Pope Leo X, were displayed in the chapel on St. Stephen’s Day on Dec. 26, 1519. Most likely, Raphael had the opportunity to see them in the Vatican.

Four months later, however, he died at the age of 37. The other tapestries were woven after the artist’s death.

“The last record that we have of all of them being hung in the Sistine is from the late 1500s,” adds Alessandra Rodolfo, curator of the exhibition.

Until now, tapestries have often been exhibited for only a few days or even hours, and as a rule, people could not see them more than ten at a time. Some of the pieces measure about five by six meters. Two of the twelve are narrow and were meant to be hung vertically.

Some of the tapestries are usually on display in climate-controlled spaces in the Vatican Museums.

The Vatican Museums’ restorers currently allow the museum to exhibit all twelve delicate tapestries at once. However, there is a one-week time limit introduced to protect the pieces. Another factor is the loans of selected tapestries to other museums.

One of the pieces will soon head to the Quirinale Palace’s Scuderie and another will be displayed later this year in the National Gallery in London.

“It’s exactly what Pope Francis is asking us, which is to share and to be a museum open to everybody and to share our beauty,” added Jatta.