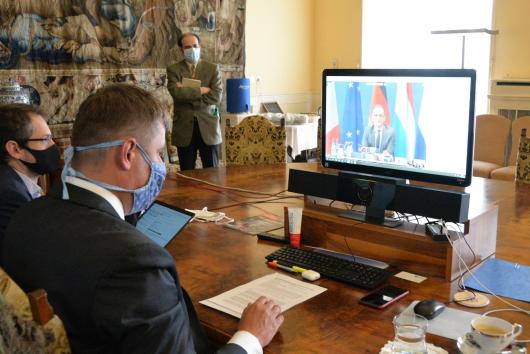 At Wednesday’s video conference, foreign ministers of Germany and its neighbors, including the Czech Republic, agreed to pursue a coordinated approach when reopening the borders. Borders of countries with a similar epidemiological situation should be opened in the first phase, the ten governments agreed.

“Together with other ministers, we have confirmed that we will act as responsibly as possible, that means, taking into account the recommendations of the European Commission and the epidemiological situation in our countries,” said Czech Foreign Minister Tomáš Petříček after the online meeting of the representatives of ten countries.

The coronavirus pandemic has clearly shown the need for a joint approach to neighborhood policy, said Petříček.

“It is difficult to imagine Europe’s recovery without mutual understating and coordination among states,” Petříček added, pointing out that the rule of reciprocity will apply, and the specific epidemiological situation in individual countries will be taken into account.

In the first phase, the open border system should return to the pre-pandemic state among regions with a similar epidemiological situation.

The Czech foreign minister also pointed out that even after the opening of the borders, individual states will apply measures on their territory to prevent the spread of COVID-19.

Political negotiations in recent days have shown that the Czech border with its neighbors, except for Poland, could open for tourists June 15. It should be also possible to travel to Hungary without having to stay in quarantine or get tested for the coronavirus after returning to Czechia.

From May 26, the Czech Republic wants to open the vast majority of its border crossings. The rules would switch from comprehensive border controls to random ones and the police would operate further from the borders.