Russia to annex four regions of Ukraine after ‘sham’ referendums 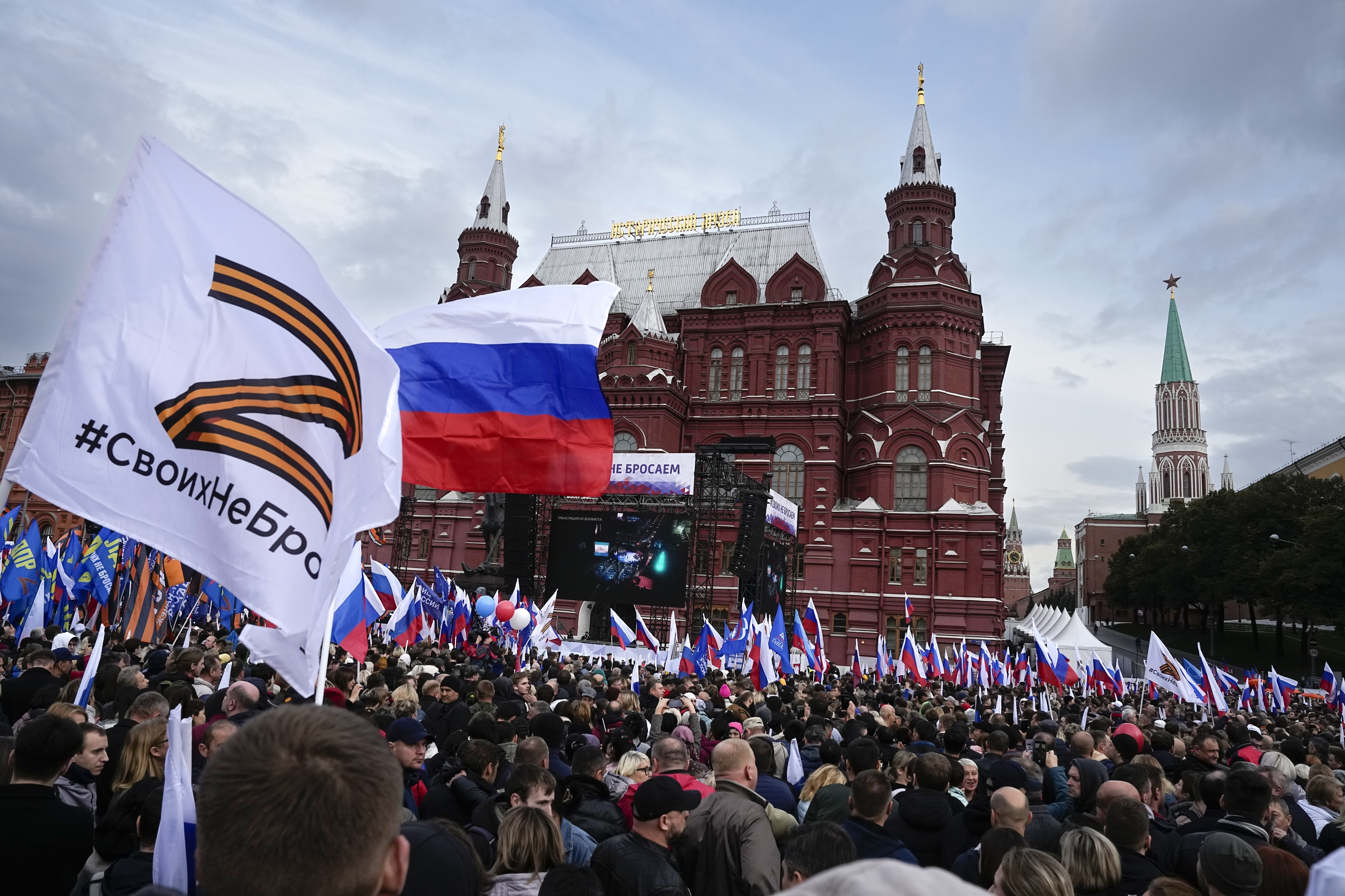 FILE - Demonstrators hold Russian state flags and flags with with the letter Z, which has become a symbol of the Russian military, and a hashtag reading "We don't abandon our own" during the action to support the referendum, on Manezhnaya Square near the Kremlin and Red Square in Moscow, Russia, Friday, Sept. 23, 2022. (AP Photo/Alexander Zemlianichenko, File)

A signing ceremony will be held by Russian President Vladimir Putin on Friday to celebrate the annexation of four Russian-occupied areas of Ukraine after recent referendums, dismissed by the West as illegitimate, showed local support to join the Russian Federation.

The Kremlin has claimed the votes held this week in Donetsk, Luhansk, Zaporizhzhia, and Kerson showed overwhelming support in all four provinces to join Russia, despite Ukraine and the West denouncing the referendums as a sham.

According to Reuters, a stage has been erected on Moscow’s Red Square, with billboards proclaiming: “Donetsk, Luhansk, Zaporizhzhia, Kherson – Russia!”

In the days following the signing ceremony, all four Ukrainian provinces will be formally incorporated into the Russian Federation, with the Russia-installed ambassador to Moscow of the self-proclaimed republic of Luhansk, Rodion Miroshnik, telling the RIA state news agency that “this should happen within a week.”

“The main thing has already happened – the referendum has taken place. Therefore, let’s say: The locomotive has already started and it’s unlikely to be stopped,” he added.

The move echoes the Russian annexation of Crimea eight years ago, which also took place after a disputed referendum.

Western media outlets have expressed concern that there appeared to be no independent monitoring of the public vote in the four areas of Ukraine, and eyewitness reports revealed how election officials had visited locals at their homes in the presence of armed guards.

The territory in question accounts for approximately 15 percent of Ukraine, and includes some areas, including parts of Donetsk, that remain under Ukrainian control. Some fear Russia will use the referendums as justification for use of nuclear weapons in protecting what it will formally consider its own territory.

The European Union, the United Kingdom, and the United States have all announced their intention to impose further sanctions on Russia due to what they believe to be illegitimate votes.

“The sham referenda organized in the territories that Russia occupied are an illegal attempt to grab land and to change international borders by force,” European Commission President Ursula von der Leyen said on Wednesday as she announced new “biting” sanctions against the Kremlin.

“We do not accept the sham referenda, and any kind of annexation in Ukraine, and we are determined to make the Kremlin pay for this further escalation,” von der Leyen added.

The fallout over the votes coincided with chaos in the Baltic Sea as both Nord Stream gas pipelines transporting Russian gas to Germany were hit by what global leaders believe to be intentional sabotage.