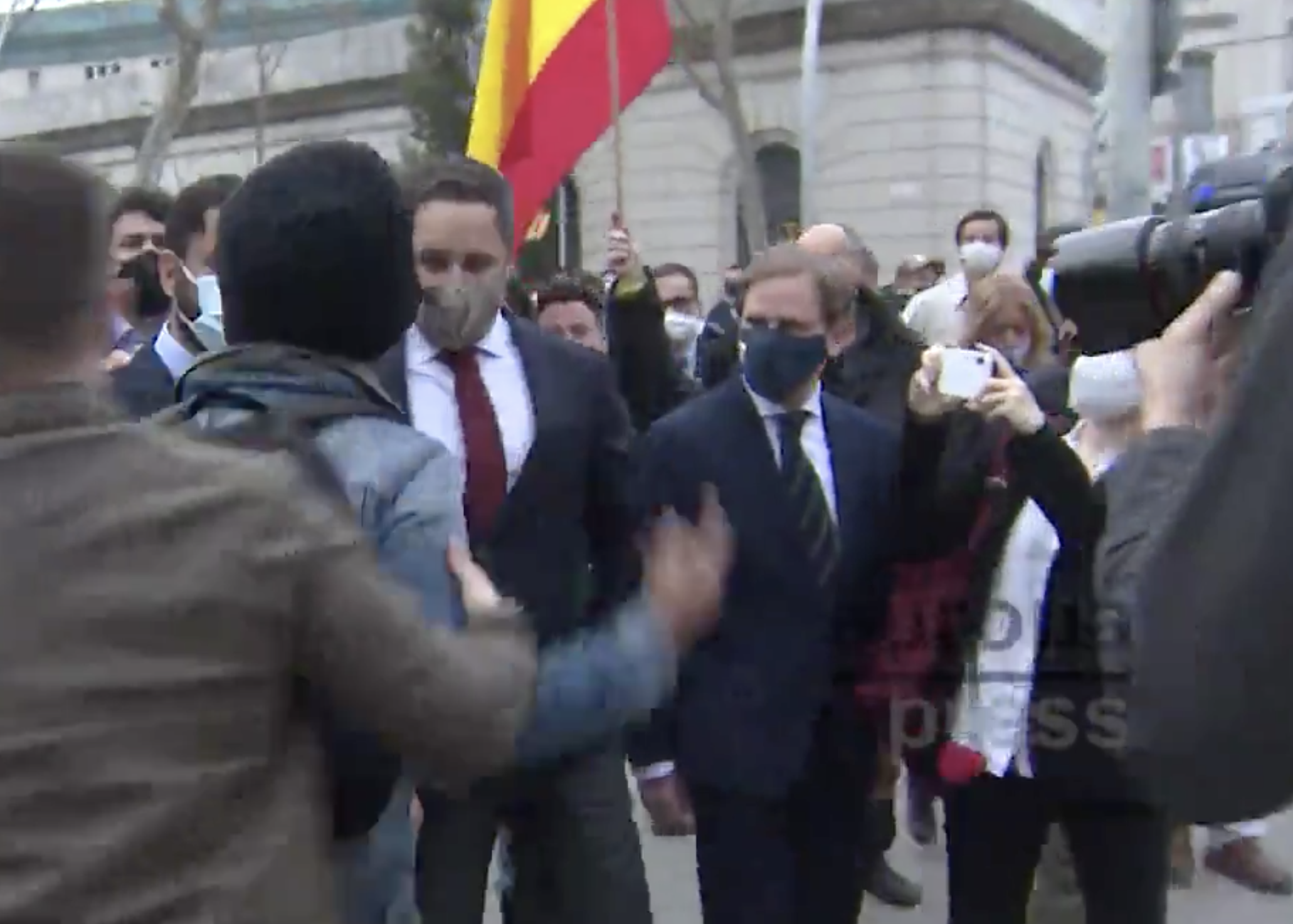 A far-left activist aggressively approached Santiago Abascal, leader of Spain’s populist Vox party – now the country’s third most popular party – as he and his entourage walked into the Parc de La Ciutadella to attend the constitutive session of the Parliament.

The activist can be seen running up to Abascal before he is pushed back by bodyguards. The man struggles and pushes the bodyguards, and allegedly tried to injure Ignacio Garriga, one of Vox’s candidates for parliament. Video footage of the incident was captured and has been circulating across various social media platforms.

The left-wing extremist is said to have managed to sneak among the people concentrated next to the political leaders in the first legislature in which Vox has parliamentary represented, with 11 deputies to be specific.

Around 30 left-wing demonstrators had gathered since 9:00 a.m. at the side door of the Parc de la Ciutadella with a banner which read: “We have passed. Vox.” (replying to the phrase “They will not pass”). The group of protesters also yelled slogans like “Long live Spain”, Spanish news portal Libertad Digital reports.

The incident took place one day after the Socialists’ Party of Catalonia (PSC), Republican Left of Catalonia (Esquerra), Together for Catalonia (Junts), and members of Popular Unity Candidacy — all left-wing to far-left political parties — agreed to enact a cordon sanitaire against Vox in the day-to-day political life inside the legislature’s chamber beginning this Friday.

The left-wing and far-left activists insist that their primary objective is to halt “hate speech” and the overall activity of Abascal’s rapidly growing national conservative party. To put things into proper prospective, Vox ran for the first time in the 2014 European elections, but narrowly failed to procure a seat in the European Parliament. Fast-forward nearly seven years later, and Vox has propelled itself to Spain’s third largest party, with 18.5 percent of the vote.

“Tonight, three hooded rats attacked my mother and sister’s business, stoning the windows and leaving threatening graffiti. While some are falsely victimized, their brigadistas attack those who previously demonize even their families,” Abascal wrote in a tweet.

“They have not been able to break the windows and burn the shop because the windows have been armored since 1999, the year in which the partners of Pedro Sánchez and Pablo Iglesias already burned our store in February and tried again in August,” Abascal added.

Neither the ruling left-wing Spanish Socialist Workers Party (PSOR) or it’s far-left Podemos junior partner have condemned the serious threats, vandalism, and attacks against the business of the mother of the Vox leader, Periodista Digital reports.

Demonstrations from Vox have also been violently attacked in the past, with politicians in the party saying that Spain’s left-wing government actually encourages such attacks.

Since seriously entering politics in 1999, when he was first elected as a counselor for the conservative and Christian-democratic People’s Party in Llodio, Abascal has consistently dealt with attacks and threats from the ETA, a Basque paramilitary-nationalist and separatist organization in Basque Country.