In the city of Wołomin, a man was beaten for trying to protect a statue of Saint John Paul II 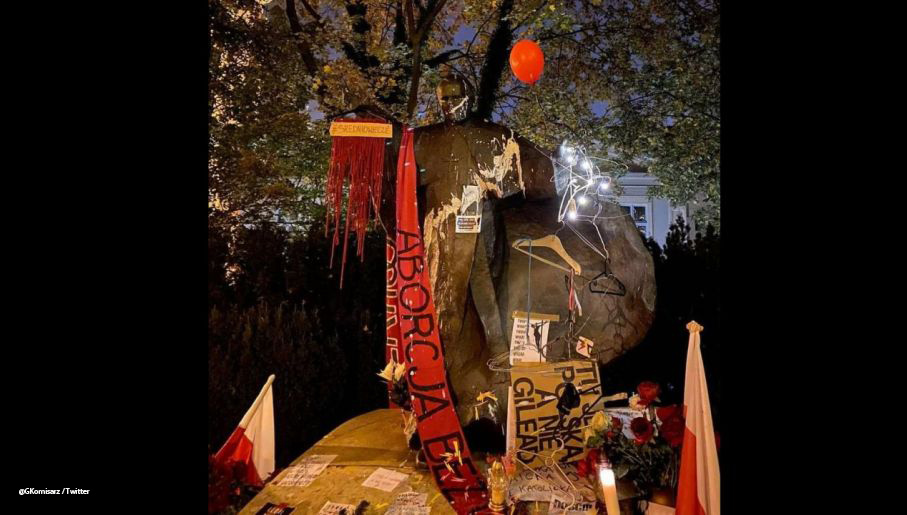 Pro-abortion protests have become increasingly violent in Poland, with radicals vandalizing statues of Saint John Paul II, considered one of the country’s greatest heroes. Statutes of the former pope have been targeted in Poznań, Konstancin-Jeziorna, Warsaw, and Wołomin following the Polish Constitutional Court’s landmark ruling last week that eugenic abortion is unconstitutional.

On Tuesday, in the town center of Wołomin, which is a short distance from Warsaw, a man was brutally attacked by pro-abortion protesters with bats while trying to protect a statute of John Paul II. The bloc of protesters initially shouted out vulgar anti-government and anti-church slogans. Several dozen Catholics responded by gathering around the statue and beginning to pray.

The protesters circled the groups of citizens, attempting to reach the statue itself. When the protesters failed to break through, some of the faithful left the area and went to their local church for reinforcements.

Upon their return, several protesters assaulted them with bats and heavily wounded the defenders. One man in particular, who reported the whole incident to police, suffered serious wounds to his head that required treatment at a hospital.

On the same day, another assault against a John Paul II statue took place in Poznań. The marching protesters initially tried to attack Poznań’s cathedral but were stopped by the police. The assailants claim that the officers had used tear gas against them, but the Poznań police have not confirmed that they deployed tear gas. While police were blocking the protest group, it is believed that some of the protesters broke away from the main group and vandalized the nearby statue of John Paul II with pro-abortion and anti-church slogans.

“Obscenities and profaning churches and statues is not the path to dialogue,” wrote former Polish Minister of Development Jadwiga Emilewicz, who also posted a photo of the vandalized statue.

In the town of Kostancin-Jeziorna near Warsaw, the statue of John Paul II in a local park was splashed with red paint. The police are currently searching for suspects in the case. The statue was subsequently cleaned by the town’s mayor and his deputy.

A less violent but nevertheless significant incident occurred near John Paul II’s statue at the front of National Museum in Warsaw’s city center. The statue is part of an artistic installation titled “the Poisoned Spring” and also contains a pool of red water surrounding the statue itself.

A few activist women submerged themselves in the water and pretended to shield themselves from the statue. A photo from their performance was shared by influential Polish YouTuber Krzysztof Gonciarz.

In addition to the profanation of churches and statues, priests themselves have also been viciously attacked by protesters.

One incident occurred in Myślibórz where a priest was asked for help from a gas station staff member who wanted the priest to tell the protesters not to hold open flames near the gas station as it was dangerous. One of the protesters responded by assaulting the priest, injuring him in the head and stomach.

Recordings of the incident have appeared online.

“We have determined the priest’s personal data and will offer him legal help to bring the bandits to justice,” Dariusz Matecki, a member of the Szczecin City Council and a pro-life activist, wrote on Twitter.

Anti-Catholic attacks were also reported in Warsaw this week, with video of right-wing and football fans defending a major church from left-wing protesters spreading across social media.