Massive crowds of protesters gathered despite the coronavirus crisis, where many destroyed police vehicles, chanted BLM slogans, and attacked officers with bricks and lasers 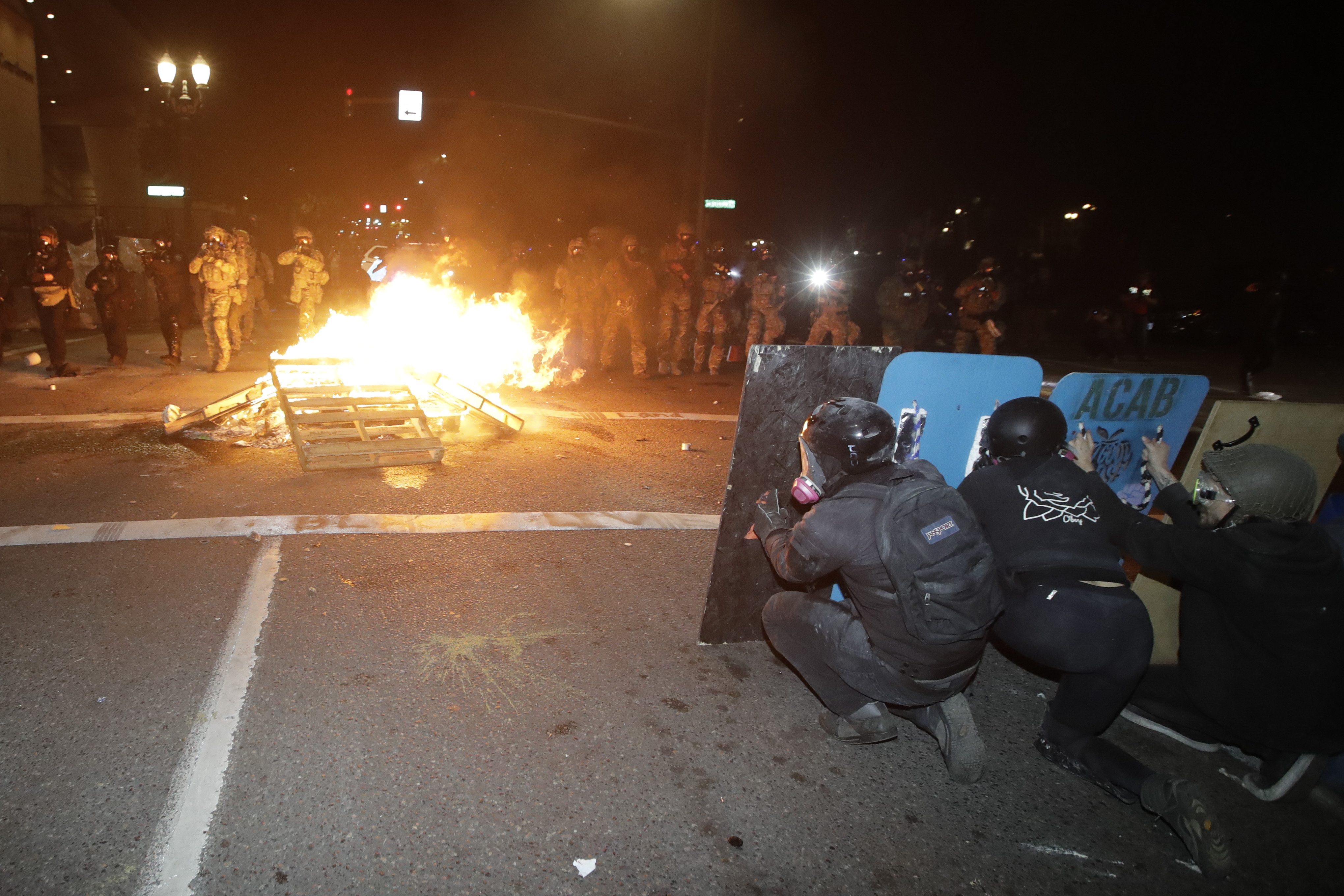 Black Lives Matter protesters rioted in cities across the United States over the weekend in what were the largest demonstrations from the radical group in recent weeks, with protesters saying they were gathering against racism and the presence of federal agents in local cities.

In cities like Portland, rioters turned the city’s downtown into a war zone while targeting the city’s federal courthouse.

During a smaller protest in Austin, Texas, one person lost his life during a shooting when a protester approached a vehicle armed with an AK-47. In another incident in Louisville in Kentucky, 300 armed members of a black supremacist militia marched in the city, with one accidentally shooting three of his fellow protesters.

During protests in Seattle, a number of protesters smashed windows and set a future juvenile correctional facility on fire. Police used tear gas and flash grenades to disperse the crowd.

Media outlets first reported that 21 police officers were injured, but over the weekend, the total number rose to 59 injured, with protesters targeting officers with bricks, stones, and bottles. One officer ended up in the hospital, 47 protesters ended up arrested, according to the Seattle police. Injuries ranged from abrasions and bruising to burns and a torn meniscus.

Seattle Police are recovering from protests yesterday where they were struck with explosives, rocks, bottles, and wood. pic.twitter.com/WtNlG0CmCb

The original impulse of the unceasing wave of protests was the May death of George Floyd during the arrest in Minneapolis, but the participants are now united by disagreement with the deployment of federal forces to help ensure order in American cities.

Demonstrations are gaining momentum especially in Portland, Oregon’s most populous city, where protests have been going on for nearly two months. The Department of Homeland Security sent federal forces there three weeks ago.

Nearly every night for weeks, #antifa & other far-left rioters in Portland have used powerful explosive fireworks as weapons against law enforcement, & to start fires. This has resulted in both local & federal officers suffering concussions & burns. https://t.co/tUbFhDtGhO pic.twitter.com/zkj5mMkOce

Police in Portland and Seattle have often been targeted with high-powered lasers that have resulted in a number of officers suffering permanent blindness — a fact that has done little to stop protesters from continuing to use the lasers. Authorities have now issued officers special glasses that help protect their eyes from the devices.

These are the types of high powered lasers rioters have used to damage the eyes of law enforcement. #PortlandRiots #antifa pic.twitter.com/Es5bieo2LO

Protesters have also thrown Molotov cocktails at Portland’s federal courthouse in an attempt to set it on fire, as evidenced by videos posted to social media. Police also announced that they found a bag with rifle ammunition and Molotov cocktails while responding to a shooting that wounded one person in downtown Portland.

Portland businesses are suffering greatly due to the nightly carnage amidst the coronavirus pandemic, with many business owners saying that downtown Portland has become “desolate” due to the rioting at the federal courthouse.

The Pacific North West Youth Liberation Front, a violent anarchist organization, has also issued a call fellow protesters to “force” anyone recording the riots to be stopped. The group fears livestreams are helping identify protesters for authorities.

Black conservative videographer Drew Duncomb, known as Black Rebel on social media, was also stabbed during the Portland protests by Antifa member convicted pedophile Blake David Hampe. The incident has not been reported by major news outlets such as CNN.

The crowd is already trying to break down the fence. Officers are responding. Still a HUGE crowd pic.twitter.com/aZyzNeFpGB

The heavily armed Black militia group known as the Not F**king Around Coalition gathered in Louisville on Saturday to protest the death of Breonna Taylor, a Black woman killed in March by police officers who broke into her apartment. One of the militia members accidentally discharged his firearm, wounding three of his fellow militia members.

One of the leaders of the group, who goes by the name of Grandmaster Jay, gave 50-minute long speech where he said that if the public doesn’t have the “truth” about Breonna Taylor’s death, “We are going to burn this motherf**ker down” referring to the city of Louisville.

“Grandmaster Jay” gave a speech that was 50 minutes long.

In it, he said that if the public doesn’t have the “truth” about Breonna Taylor’s death, “We are going to burn this motherfucker down.”

About 100 protesters marched in Austin, Texas. The local protests were disrupted by the shooting, in which one person lost his life. According to footage posted on social media, several shots were fired during the march.

Initial reports suggest that the perpetrator shot a person who was approaching his car, with photos revealing that the victim was armed with an AK-47 earlier in the day. Police confirmed that the suspect was detained, however, they did not provide any further information, stating that the investigation was still ongoing.

Clip of the shooting at the protest in Austin Texas from Hiram Gilberto on FB pic.twitter.com/VFbzqfoSff

Conservative commentator also raised the issue of why so many people are allowed to gather in Portland and other cities in the middle of the coronavirus pandemic.

Why do we even bother to wear masks when these slobbering nincompoops are spreading COVID like jam on toast? pic.twitter.com/sUAoTnlJkj