Clashes between migrants and police lasted about two hours 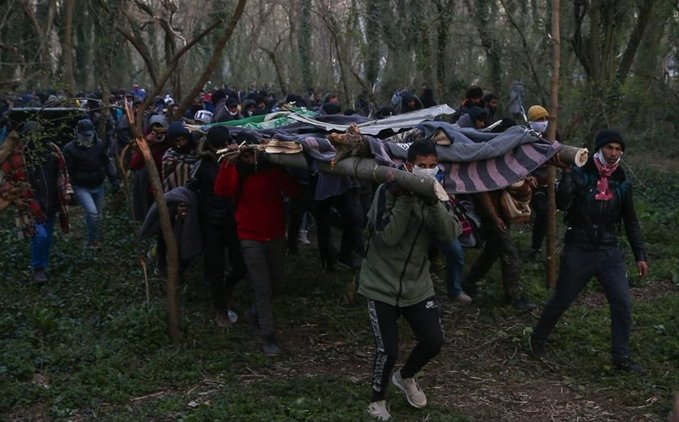 On social media, users posted videos of groups of migrants hauling what are supposedly bridges meant to lay across barbed wire fencing, allowing migrants to climb over quickly. The migrants were reportedly repelled by Greek police after two hours of battling to cross the border.

A few hours ago, they are preparing to invade again tonight, it looks like a siege ram this. #Evros #Greek #EuropeanUnion #Border #Greece pic.twitter.com/zE8t9bWw0Y

According to idnes.cz, tear gas was also used by the Turkish police against the Greek security forces, according to Greek media and European correspondents, Turkey has been accused numerous time of trying to help migrants enter Greece, including footage previously captured by Associated Press showcasing over a dozen Turkish police officers firing tear gas at Greek forces.

The situation on the Greek-Turkish border escalated after a few days of relative calm, but the clashes Wednesday morning demonstrate the crisis at the border remains far from over.

#Evros border yesterday.
Invaders with this makeshift bridge tried to pass and jump over the barbed wire but were repelled by the Greek-European forces. pic.twitter.com/dOfMpPHoVp

During the clashes, Greek police used tear gas and water cannons against hundreds of migrants. Migrants then lit several fires on the Turkish side of the border.

Referring to the statement by the governor of the Turkish border region, the Anadolu agency stated on Tuesday that since the end of February, about 147,132 migrants crossed the border into Greece through two border crossings in the Edirne region and crossings will continue.

According to the same source, since the end of February, the Greek security forces killed three and injured 214 migrants at the border, a claim that Greece has fiercely denied. Greece says Turkey is active spreading propaganda.

Currently, Greece is concerned about the migrant issue more than ever, especially over fears that coronavirus may spread quickly among migrants. The Greek authorities, have now decided to introduce restrictions in migrant camps on the Greek islands in the hope of preventing a widespread crisis.