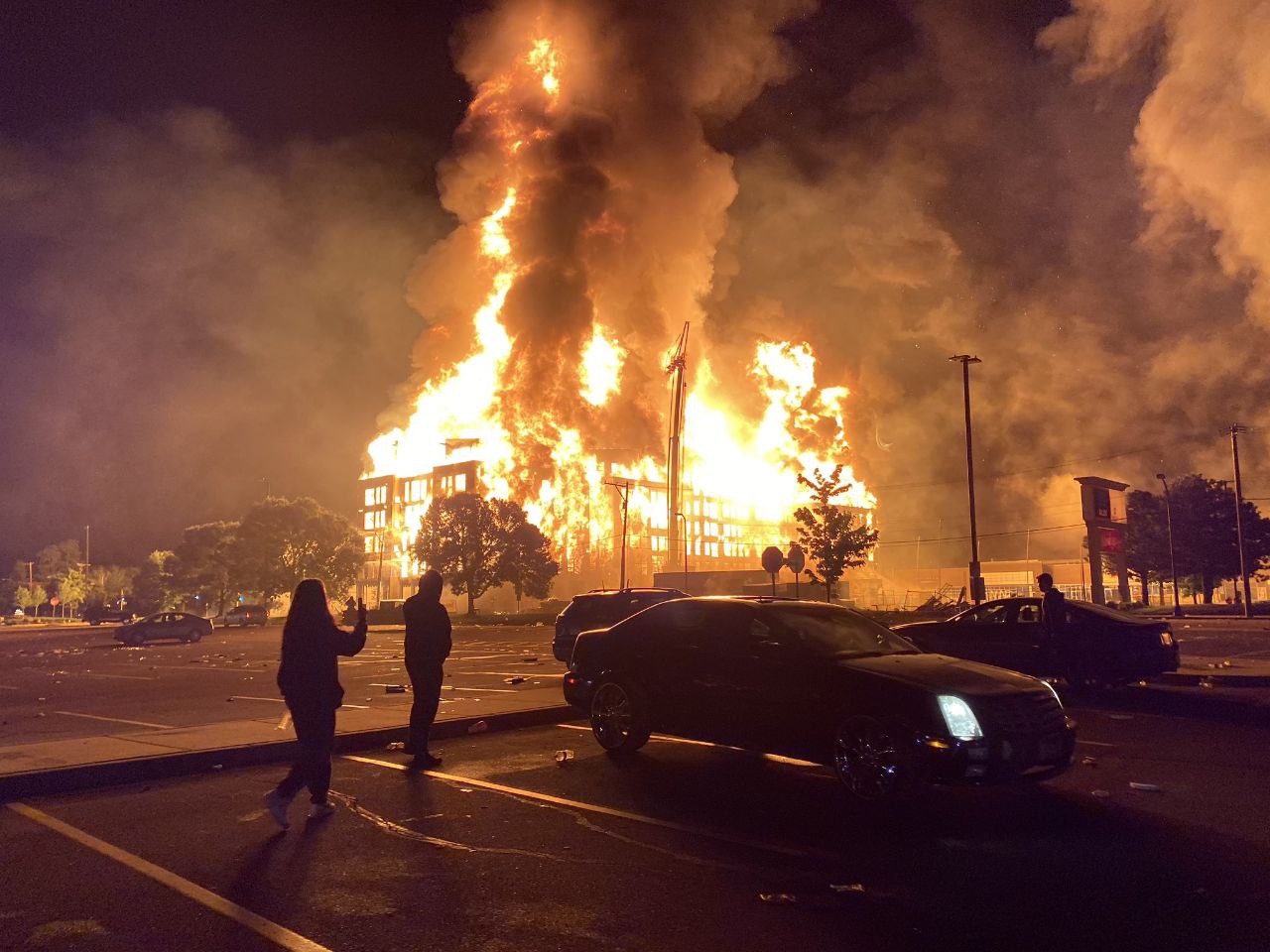 On Wednesday night, protests in Minneapolis triggered by the death of George Floyd turned into a riot in predominately black neighborhoods, with the police reporting looting of shops and even a deadly shooting.

Now, there are fears that the Minneapolis rioting could escalate and spread to other cities in the United States after large protests were seen in Los Angeles.

Protests in Minneapolis began on Tuesday as a reaction to the video of a police officer who held Floyd down with a knee on his neck, which protesters are alleging was responsible for killing the 46-year old African-American. As of now, no medical examiner report has been released.

Floyd was arrested after a shopkeeper reported he allegedly tried to pay using a counterfeit bill.

Video of a Target set on fire spread quickly on social media, but it was one of only many buildings set alight in Minneapolis.

Unicorn Riot, an independent media group, wrote on Thursday morning that “smoke, fire alarm blaring, sprinklers going off inside Target.” It was the same Target that had already been looted by hundreds of people the previous day, many who brought along their own children to participate.

Children brought along to loot Minneapolis Target store before the building was set on fire pic.twitter.com/xQRNlax6mz

The scale of some fires was enormous, with massive blazes breaking out and eventually engulfing entire buildings.

Home safe. Can’t believe what I witnessed tonight. Don’t really have much to say.. #minneapolisriots pic.twitter.com/l666KDdsjk

Minneapolis Mayor Jacob Frey has already reached out to Governor Tim Walz over the violent protests, asking him to deploy the National Guard to regain control of the city.

Some footage highlighted mass looting taking place in the city featuring a majority of minority youths, which police have shown little ability to control.

This is awful out here. No police. Looting continues pic.twitter.com/087TpNWhPV

Social media was filled with nearly endless streams of video of buildings burning across the city.

Angy Ngo, an independent journalist with a large social media following, is on the ground in Minneapolis and reported that fires are still smoldering this morning. He noted that an entire affordable housing development was burned to the ground, and an Autozone and Wendy’s destroyed as well.

Fires are still smoldering in Minneapolis this morning. The entire affordable housing development was razed to the ground. Wendy’s and Autozone have been completely destroyed in the riot as well. #BlackLivesMatter #antifa #GeorgeFloyd pic.twitter.com/Gkd05db6d2

Many, such as Twitter user Ahmed M., are lamenting that people are targeting their own neighborhoods for destruction forcing business owners like him to defend their property despite initially supporting the protests.

Yesterday I joined hundreds of other protesters outraged by the killing of #GeorgeFloyd. A day later, I’m boarding up my business after it’s been destroyed. Utterly stupid and senseless way to remember an innocent man’s life pic.twitter.com/gXxIZkbD5p

Protestors appeared to use the death as a pretext to not only loot store owners that had nothing to do with the death in custody, but to also attack everything related to the police department.

The mobile police camera just went into the fire. pic.twitter.com/GotDEUiKvP

A group of armed men was also spotted guarding out in front of a tobacco shop. The men stated that they came to help the store owners to protect their shops as the police have been overextended.

“These guys are out here with machetes, with shattered windows trying to keep looters out because cops can’t get in here,” said one of the armed men.

These guys say they support the protests but not the looting. Showed up to help this tobacco store owner stop people from breaking in pic.twitter.com/x2FMQiQwVK

Following the death of Floyd, four police officers have been already fired by the police department, but protesters want them to be charged for Floyd’s death.

However, some people on social media are worried that the situation will get out of control due to citizens deciding to protect others with firearms.

A deadly shooting was reported on Wednesday in connection to looting at a nearby pawn shop while the store’s owner tried to protect his business.

According to the Star Tribune, the wounded man who was shot by the store owner was taken to hospital, where he succumbed to the injury. One person is in custody.

Europe is not immune to racially fueled rioting either, with recent riots involving police and migrant youth taking place in France, Belgium and Germany. However, Central Europe that are ethnically homogenous, such as Hungary, Poland, and the Czech Republic have avoided the racial strife seen in Western countries, with much of the media consistently depicting racial strife in the United States, Great Britain, and France.

Although police misconduct has occurred in the United States, black communities have consistently rioted and looted following the death of black males at the hands of police officers.

The New York Times prepared a comprehensive guide to the amount of damage done in Ferguson, Missouri following the fatal shooting death of Michael Brown.

Devastating riots in Los Angeles followed the death of Rodney King in 1992, which resulted in hundreds of buildings burned, deadly assaults, and millions of damage done in predominately African American neighborhoods.