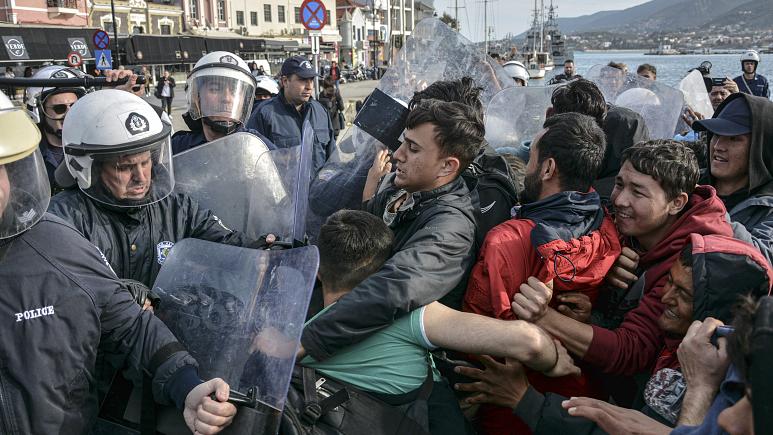 Greece is taking the necessary steps to strengthen security on the border with Turkey in response to Ankara’s warning that migrants could return to the EU border, Greek Defense Minister Nikos Panajotopulos announced on Wednesday

The influx of migrants from Turkey to Greece was triggered at the end of February by Ankara’s announcement that Turkey no longer intended to comply with the migration agreement concluded with the EU and that it would stop actively preventing people from crossing the border.

The Greek police presented a strong defense at the border after thousands of people tried to enter Greece, with police deploying tear gas and using other non-lethal measures to halt the migrant advance. Migrants were eventually stopped by the coronavirus and associated restrictions.

Turkish Foreign Minister Mevlüt Çavuşoglu’s warning this week that migrants could soon return to the Turkish-Greek border after coronavirus restrictions were lifted is being taken seriously by Greek authorities.

“There were migrants in the refugee camp who went to the border with Greece but this stopped due to the pandemic. I do not say this as a threat, but after the pandemic is over, the refugees will definitely want to leave and go there,” Çavuşoğlu said.

He is not the only one to issue such a threat from the Turkish government.

“When this epidemic is over we would not prevent whoever wants to leave,” warned Interior Minister Suleyman Soylu at the end of March.

Soylu also made a direct warning to Europe, saying that mass migration will change Europe’s governments, bring down Europe’s economies, and help collapse the stock market during an interview on the Tarafsız Bölge show on CNN Türk.

“Refugees who cross to Europe will soon top to a million, European governments will fall, their economies will be destabilized and their stock exchanges will tumble, and they can’t do anything about it,” said the interior minister.

The European Union’s border agency, Frontex, has also repeatedly warned that thousands of migrants will be trying to enter Greece after the coronavirus restrictions are lifted.

The Greek authorities are also working on how to deal with the approximately 11,000 refugees who have already been granted asylum. About 6,500 of them live in subsidized hotels or apartments, but accommodation programs are due to end in the upcoming months and it is not clear where these people will go.

Another 2,500 are in asylum facilities inland, and approximately 1,500 people are still in refugee camps after being granted asylum.

Title image: Migrants gather at Maritsa river (Evros river in Greek) in Edirne, Turkey, at the Turkish-Greek border, Monday, March 2, 2020. Thousands of migrants and refugees massed at Turkey’s western frontier, trying to enter Greece by land and sea after Turkey said its borders were open to those hoping to head to Europe. (AP Photo/Emrah Gurel)