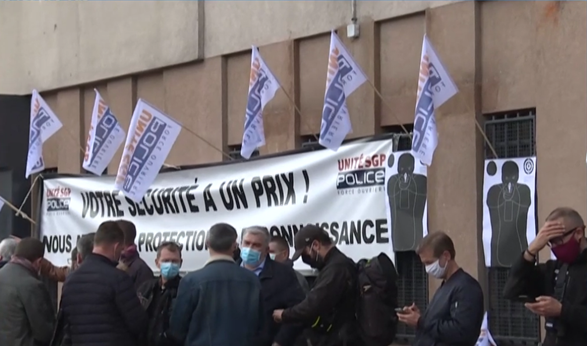 “We want the government to take stricter measures to protect us,” French police call on French politicians

In response to the attack of about forty armed people on the police station in the Paris suburb of Champigny-sur-Marne, a hundred French police officers staged a protest in front of the attacked police station on Monday.

The Champigny police station, about fifteen kilometers from the center of Paris, has become a target of a siege for the third time in the past two years. This time the attack ended with knocked out windows and damaged police vehicles. No one has been arrested.

“We are here to say we have had enough. We want the government to take stricter measures to protect us,” said Bruno Angelo, a representative of one of the police trade unions, in an interview with the AFP news agency.

Police officers demonstrated with banners reading, “Our security has a price,” and depicting police officers as targets in the heavily-migrant neighborhood of Champigny-sur-Marne, according to Czech TV 24. The attack follows the brutal shooting of two police officers last week in Paris by suspects described as African or Middle Eastern in appearance.

“We are no longer safe in our workplace. When we are outside, it is difficult, but now we do not have a moment’s rest even inside,” said one of the French policemen.

Police are routinely targets of violence. This year, 12 youths ambushed one police officer in an elaborate ambush in Lyon, hospitalizing him in the intensive care unit for eight days with broken teeth and lacerations to his face that required stitches. Another ISIS member crushed two motorcycle police officers with his BMW in Paris this April, leaving one in a coma.

“Police, of course, are urging the government to do something about it, to give them more resources. Today, police unions will meet with the interior minister and will be received by President Macron himself on Thursday. The situation is critical,” said the Czech TV correspondent in France Jan Šmíd on Tuesday.

The investigation into the attack from this weekend is also continuing. Police have already found a total of eleven devices for setting off the fireworks used in the attack. Now, authorities look for DNA on them to identify the attackers. Video recordings from the police station and also videos from people in the area circulating on social networks are another source of evidence in the case.