Examining relations between Germany and Russia

When Germany gets along with Russia, Poland suffers. Bartłomiej Radziejewski warns about the improvement of relations between the two countries and advises how to approach the issue. 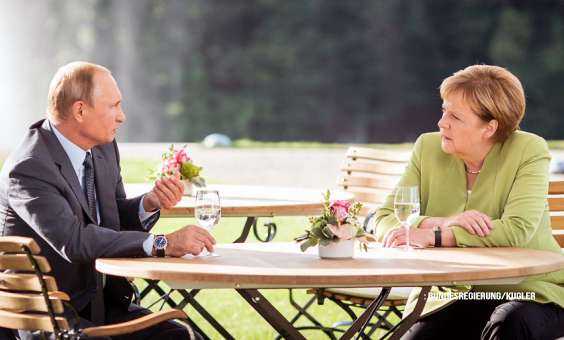 Last weekend, German Chancellor Angela Merkel met with Russian president Vladimir Putin, confirming the warming of German-Russian relations. This is the result of American tariffs on German products, which forced Merkel to look for allies in Russia. Ukraine will be one of the main casualties of this phenomenon.

The recent meeting between Merkel and Putin in Meseberg was more harmful than the recent one between Trump and Putin in Helsinki. The anti-Polish and anti-Ukranian Nord Stream 2 was confirmed despite American objections and threats of sanctions.

The Polish public opinion was on the edge of hysteria when it came to the Helsinki meeting. When it comes to the Meseberg one, not so much. “So typical of Polish public debate!,” Radziejewski, director of nowakonfederacja.pl writes on Twitter.

Dark times are not a prediction anymore – they’ve become a reality. Even if we can’t feel it yet

Although Poland’s situation is far from the noose tightened around Kiev, the situation is getting worse. Poland has gone all in on Trump, who has in effect – willingly or not – brought Merkel and Putin closer. By attacking the German economy Trump also hurt Poland’s, which is very dependent on its neighbor’s.

No one in Poland should have to be reminded about the threat of German-Russian agreements which shrug off Western alliances and guarantees of independence.

What can be done? First of all, carefully navigate between the powers. Don’t stick your head out or provoke any of them. Be the last to enter into a conflict. This requires much more sophisticated and clever diplomacy than Poland has had before.

Secondly, Poland should develop its own strength as quickly as possible. Dark times are not a prediction anymore – they’ve become a reality. Even if we can’t feel it yet.