‘We will take back your criminal asylum seekers,’ says Taliban’s spokesman

“They would be put on trial. The court has to decide,” says Zabihullah Mujahid about illegal migrants that would be sent back to Afghanistan 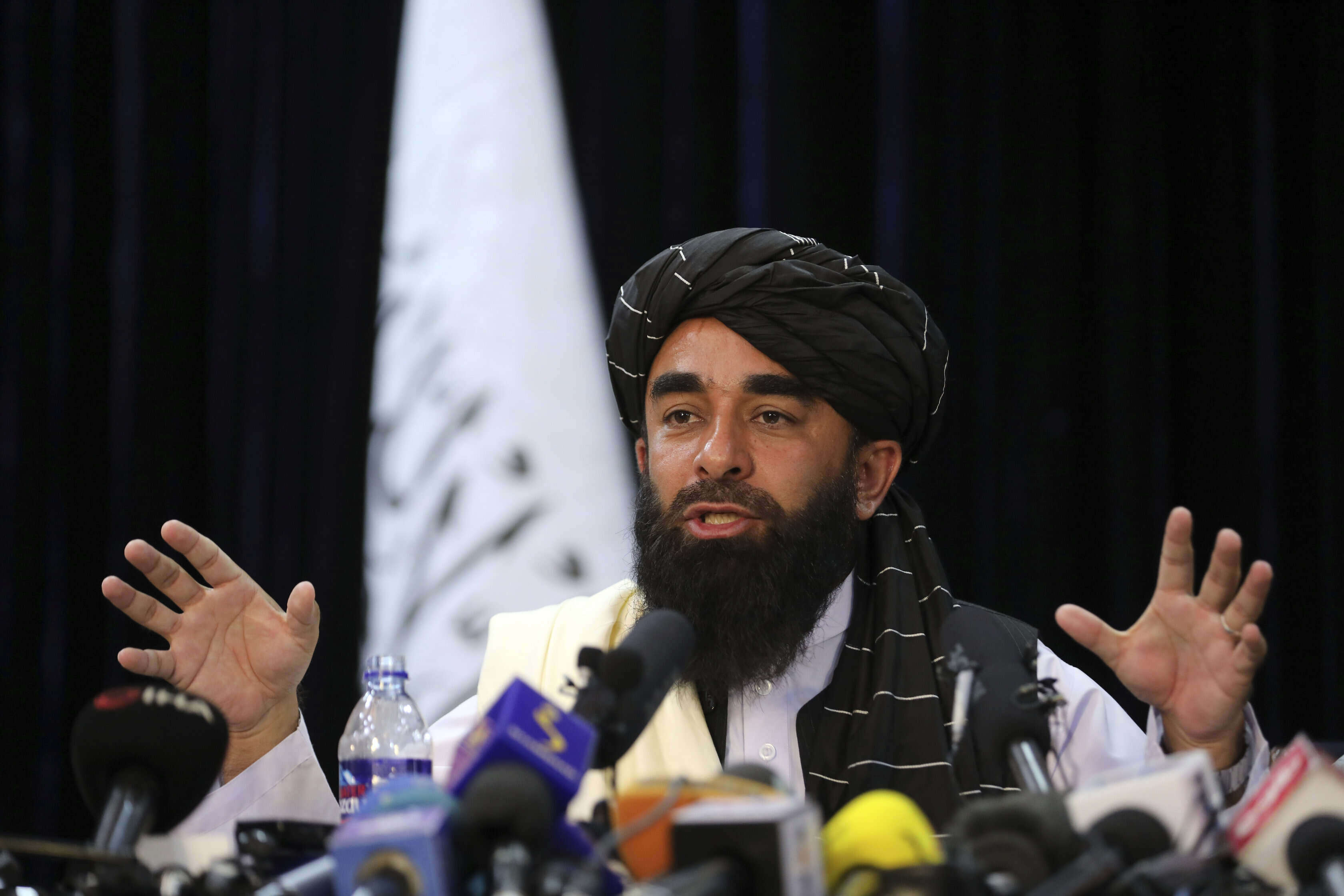 In front of a Taliban flag, Taliban spokesman Zabihullah Mujahid speaks at at his first news conference, in Kabul, Afghanistan, Tuesday, Aug. 17, 2021. For years, Mujahid had been a shadowy figure issuing statements on behalf of the militants. Mujahid vowed Tuesday that the Taliban would respect women's rights, forgive those who resisted them and ensure a secure Afghanistan as part of a publicity blitz aimed at convincing world powers and a fearful population that they have changed. (AP Photo/Rahmat Gul)

The Taliban are open to taking back Afghans who have been slated for deportation from the European Union, after which they would face criminal trials under Taliban rule, according to the official spokesperson of the Taliban, Zabihullah Mujahid.

Under life-threatening circumstances, journalist Shams Ul-Haq met with Mujahid for an interview for the Kronen Zeitung.

“Yes. They would be taken to court. The court would then have to decide how to proceed with them,” Zabihullah said when he was asked whether Afghanistan would take back deportees from countries like Austria and Germany who are looking to deport Afghans convicted of crimes.

When asked what the Taliban plans to do in Kabul, Mujahid noted that it is in the process of forming a government. Then normality should return.

“When the US moved its troops from Kabul to the airport, they invited everyone who wanted to go to America or Europe to come. That could only result in the chaos that could be used for terror,” noted the Taliban’s spokesman.

According to Mujahid, many Afghans now want to leave their homeland over fears caused by the propaganda, while others simply want to emigrate to Europe or America.

“That’s nothing new. Young people, in particular, have always tried to get to Europe via Turkey and Greece. That is not just a problem for Afghanistan. There is also poverty in Pakistan and other countries. Many now want to take the opportunity to escape,” said Mujahid.

“On one hand, we have people who want to leave illegally. That is not allowed. Those who have no documents and want to go abroad illegally experience miserable conditions there. Everyone knows that. But those who can show a passport and visa have the right to do so. In principle, the following applies: Afghans have the right to travel wherever they want. But not right now with all the chaos at the airport. We are trying to soften this rush. Those who do not have documents should not come to the airport. We don’t allow that. Later, we will find a way for those who want to leave,” he added.

Mujahid admitted that the Taliban is aware that the situation in Europe is anything but rosy for Afghan refugees. He pointed out that women and children that leave for Europe are housed in what he describes as “horrific collective shelters”. According to Mujahid, the Afghan economy will recover, jobs will be created, and the security situation has already stabilized.

Shams Ul-Haq also asked whether the new government would take back Afghan citizens not entitled to asylum in Germany or Austria, who might have committed criminal offenses.

“Yes. They would be put on trial. The court has to decide how to proceed in their case,” emphasized Mujahid.

He also explained that the Taliban would secure all rights that women are entitled to under Sharia law, adding that the Afghan tradition is not against women but aims to help them live and ensure their safety. The Taliban allegedly plans to grant women Islamic rights, enable education and create framework conditions for involving them in the work process. However, the Taliban has already banned women from state television despite previous assurances that they would not, and women are required to receive official permission from their husbands if they are leaving the house for three days or more. Women are reportedly to be allowed to attend university, but there will be no mixed classes.

Mujahid talked about the danger of ISIS supporters, a terrorist group greatly feared by the West.

“There is no IS where we are in control. Some Afghans who used to be part of ISIS in Syria and Iraq have now returned, but we see no danger in them. They won’t cause any problems in Afghanistan,” the Taliban’s spokesperson said, adding that the situation is under control.

Regarding cooperation with EU countries, Mujahid reiterated that the new Afghanistan government wants to maintain good relations, even though Europeans supported the war in Afghanistan.

“Afghanistan urgently needs trade and diplomatic relations with these countries. If the Europeans have any concerns, please feel free to let us know at the diplomatic level. We are open to discussion and hope to allay these concerns,” called Mujahid on the European states.

“The sanctions, the freezing of our funds, are unjust to all 35 million Afghans living here. As I said, the point now is for Europe and the Islamic Emirate to talk to each other,” he concluded.

The interview also touched on the subject of US intentions in Afghanistan in the past twenty years, which were, according to Mujahid, mainly based on geostrategic plans. Another point of discussion was then the conflict with Ahmad Massoud, who rules Panjshir.

Title image: In front of a Taliban flag, Taliban spokesman Zabihullah Mujahid speaks at at his first news conference, in Kabul, Afghanistan, Tuesday, Aug. 17, 2021. For years, Mujahid had been a shadowy figure issuing statements on behalf of the militants. Mujahid vowed Tuesday that the Taliban would respect women’s rights, forgive those who resisted them and ensure a secure Afghanistan as part of a publicity blitz aimed at convincing world powers and a fearful population that they have changed. (AP Photo/Rahmat Gul)