Many elements of a pivotal pact signed by the Third Reich and the Soviet Union prior to the Second World War still appear valid today, writes Polish reporter Jakub Maciejewski 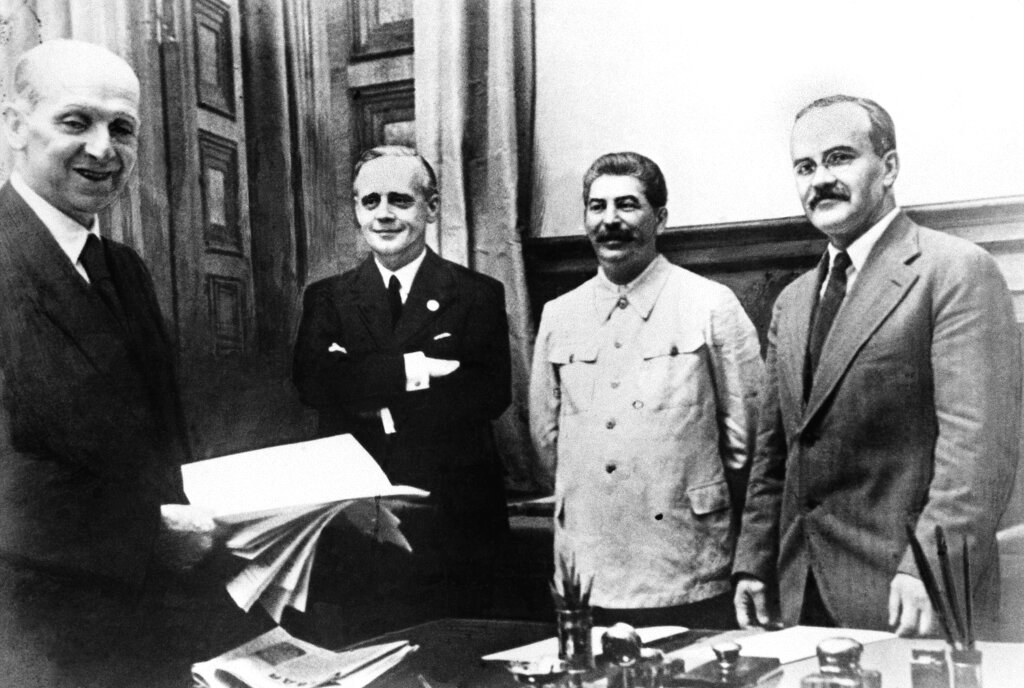 This was the scene in Moscow, August 23, 1939 after representatives of Nazi Germany and Soviet Russia signed a 10-year non-aggression pact. Shown from left to right are: Vyachesloff Molotov, Joseph Stalin, Joachim von Ribbentrop, and Friedrich Gaus. (AP Photo)

Some 83 years and three generations later, the agreements made in the Molotov-Ribbentrop Pact have not been erased completely.

The central part of Poland’s eastern border, between Ukraine and Belarus, is the very same one Hitler and Stalin agreed on by the end of September 1939 after the joint invasion of Poland. A similar situation exists regarding the northeastern border of Romania, and the same argument could be made regarding Lithuania’s borders.

Despite the fact that making changes to those borders is not in the interest of the aforementioned countries, an analysis of both the precise terms of the agreement and the current state of things leads one to conclude that the arrangements made between both totalitarian regimes were never broken.

Are other provisions of the pact still in force?

Article I of the document states:

“Both High Contracting Parties obligate themselves to desist from any act of violence, any aggressive action, and any attack on each other, either individually or jointly with other Powers.”

So, the opening portion of this pact appears to still be valid. The second article also sounds ominous:

Berlin’s restraint in aiding Ukraine, especially in the first months of the war, is a premise showing that this article is also being respected today.

“The Governments of the two High Contracting Parties shall in the future maintain continual contact with one another for the purpose of consultation in order to exchange information on problems affecting their common interests.”

Here, Olaf Scholz shows an especially exemplary obedience to the document, and he even said that he speaks with Putin about the war situation.

The rest of the points are hard to verify as of now, as the division of Central and Eastern Europe is underway, but we will figure that out soon enough.

Now, we can take a closer look at more menacing aspects, as the agreement between Stalin and Hitler featured wider political plans. The division of Europe; acceptance of their state doctrines, communism and Nazism; the common hostility for the Anglo-Saxon world; and the hidden intent of the Kremlin that in the end it will grab Germany by the neck and conquer lands all the way to Lisbon.

There are pacts and agreements that are either lasting or not known to history. The Peace of Westphalia of 1648 outlined the way international politics were handled for almost 200 years. Poland’s western border was one of the most permanent borders on this part of the continent, and it survived 400 years, which means that there are political agreements and tendencies that are more durable and ones that are more transitory.

Naturally, the Molotov-Ribbentrop pact was signed amidst different political realities, but in the face of a real invasion by Russian-Nazism in the 21st century against Ukraine and a menacing German indifference, a serious question should be asked by the Poles.

Are the rapprochements between Germany and Russia still present even when the most horrible of crimes are being committed?