His actions are absolutely unacceptable, says PM Babiš about the behavior of the president’s chancellor 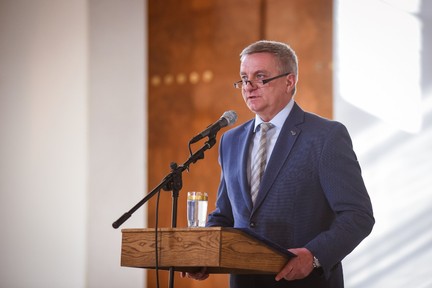 On Tuesday, Czech Prime Minister Andrej Babiš called the actions of the head of the President’s office Vratislav Mynář, who failed to report about the state of health of President Miloš Zeman, unacceptable.

According to Babiš, Mynář should resign, and Zeman’s advisor Martin Nejedlý should then lose his diplomatic passport. Babiš thus reacted to the information that Mynář and other people from Zeman’s vicinity knew that the president was unable to hold office, but they withheld this information.

“The whole situation that has arisen is caused by the inadequate and unacceptable behavior of chancellor Mynář, so it would be best if he resigned immediately. His actions are absolutely unacceptable,” Babiš wrote on Twitter.

According to the iDNES portal, Babiš stated that if Mynář did not resign, he would dismiss him after the expected activation of Article 66 of the Constitution, which would remove powers from the president.

The chairman of Civic Democrats (ODS) and the leader of the SPOLU (Together) coalition, Petr Fiala, also called on Mynář to resign.

“If he does not do so and Article 66 enters into force, the prime minister — whether the current or the future one — should dismiss him,” he said.

Although constitutional lawyer Jan Wintr explained that based on Article 66, the prime minister would have the authority to fire the president’s chancellor, according to Mynář himself, only the president can dismiss him.

Babiš also told Rádio Impuls that Zeman’s advisor, Martin Nejedlý, should not have a diplomatic passport, appealing on Minister of Foreign Affairs Jakub Kulhánek to deal with this task. The reason behind the request is the health condition of President Miloš Zeman, due to which the passport held by Nejedlý loses its meaning.

Kulhánek has already called on Nejedlý to hand in his diplomatic passport within seven days.

“It is unlikely that he would now use the passport for its original purpose, i. e., to accompany the president on official foreign trips,” he explained on Twitter, adding that if Nejedlý does not follow through with the request, the ministry will have the document revoked.

Nejedlý has already stated that he did not need a diplomatic passport and, if asked, was ready to hand it in.

Fifty-five-year-old Nejedlý acts as the president’s economic advisor and is described as one of the key men in Zeman’s vicinity. In the past, for example, he participated in Zeman’s talks with Russian President Vladimir Putin.

In 2015, the media pointed out that Nejedlý has, contrary to custom, a diplomatic passport that makes travel easier. Last November, Nejedlý sparked controversy with his trip to Moscow with a diplomatic passport despite that the Ministry of Foreign Affairs was not informed in advance about the program and purpose of the trip.