Survey: Czechs are more cautious about COVID-19 this summer than last year 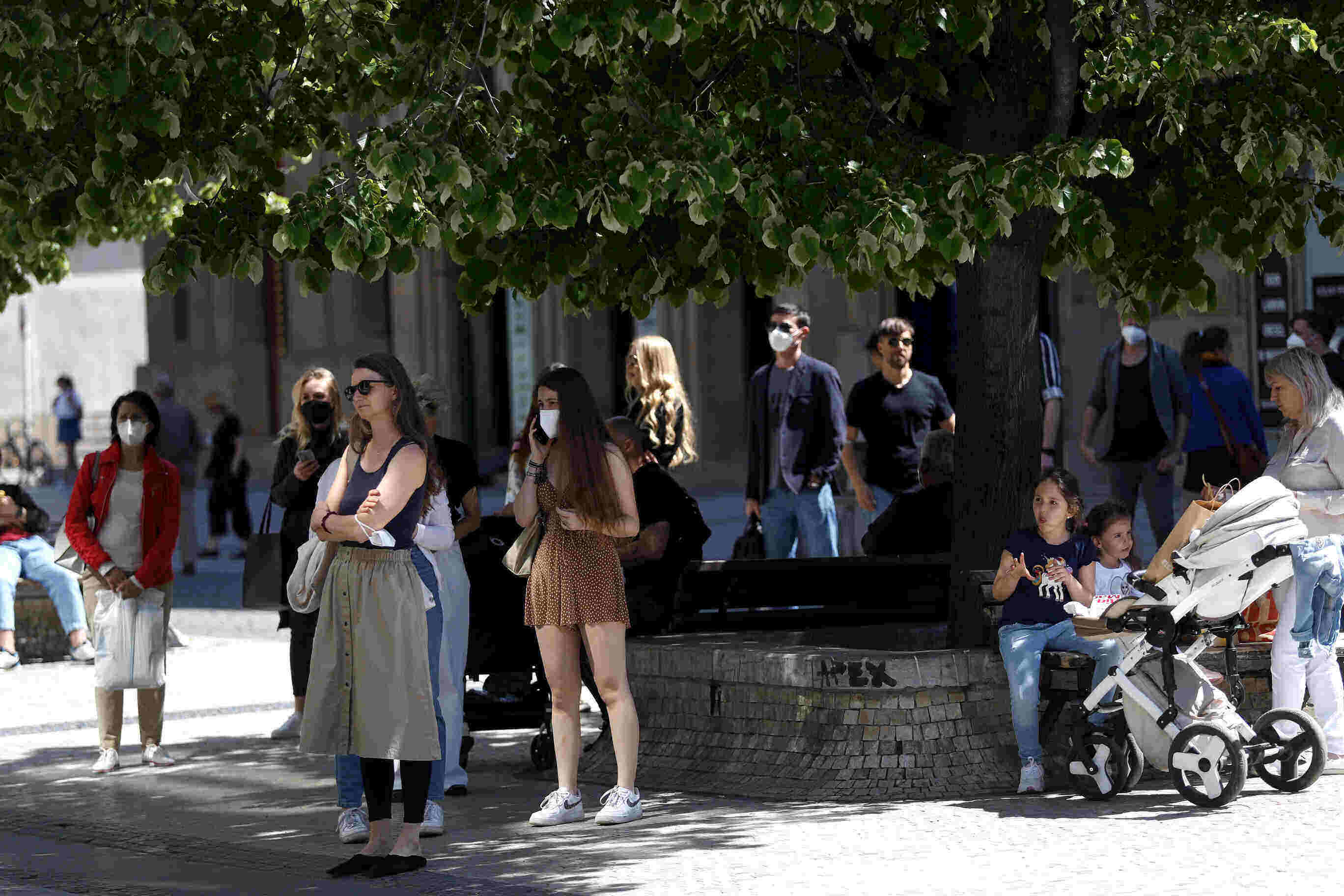 People wait in line in front of a shop in Prague, Czech Republic, Monday, May 10, 2021. The Czech Republic is massively relaxing its coronavirus restrictions as the hard-hit nation pay respect to nearly 30,000 dead. Monday's wave of easing came after the new infections fell to the levels unseen from August when the government failed to react in time to an opposite trend, the growing numbers of infected which later contributed to record numbers of deaths. (AP Photo/Petr David Josek)

Czechs are currently more cautious than last summer regarding the risk of COVID-19 infection. The average number of personal contacts in July was around 19 per week. Last year it was 23.

This information is based on the next stage of the “Life during the pandemic“ survey of the company PAQ Research. According to sociologist Daniel Prokop, however, the number of people being tested has also decreased in the last month, as about 12 percent of people completely reject vaccinations.

According to Prokop, the survey showed that people are protecting themselves from COVID-19 more than in the summer of 2020. For example, last summer about 30 percent of people wore some type of facemask, and now the proportion is about 70 percent.

The reason may also be the obligation to protect the nose and mouth in public places, which did not apply last year. According to the survey, among 26 percent of people over the age of 55, the tendency not to leave home and isolate persisted. Last year, 21 percent of respondents were just as careful.

“The average number of direct personal contacts during July was around 19 contacts per week. This is slightly less than last year, when it oscillated between 22 and 23,” said Prokop. According to the survey, fears of infection also affect restaurant attendance.

Roughly two-thirds of respondents in the survey reported at least partial immunity to COVID-19, due to vaccination or illness in the last three months.

“At the end of July, 70 percent of respondents were willing to get vaccinated or had already received at least one dose of the vaccine,” said the sociologist. According to him, about 12 percent of people completely refuse vaccination. Their number is higher among younger people without a high school diploma and from smaller cities, as well as the poor, women, and people who are not afraid of COVID-19.

On the contrary, people who have had COVID-19 in the past or know someone who had the disease are more willing to be vaccinated.

The epidemic is also alleviated by the fact that, thanks to the holidays, the number of people present in the workplace has now temporarily decreased to two-thirds, which also reduces contacts. About seven percent of people now work entirely from home, and about eight percent use a part-time home office, the survey found.

Prokop also pointed out that the rate of people tested for COVID-19 has dropped in the last month. While 48 percent of people took the test in May and June, the proportion was 38 percent in July. According to him, fewer people with symptoms or after risky contact are also tested. “These trends may be problematic in early September when returning to schools and from holidays,“ he concluded.

Title image: People wait in line in front of a shop in Prague, Czech Republic, Monday, May 10, 2021. The Czech Republic is relaxing its coronavirus restrictions on a widespread basis as the hard-hit nation pays respect to nearly 30,000 dead. Monday’s wave of easing came after the new infections fell to levels unseen since August, when the government failed to react in time to an opposite trend in the growing number of infected, which later contributed to record numbers of deaths. (AP Photo/Petr David Josek)