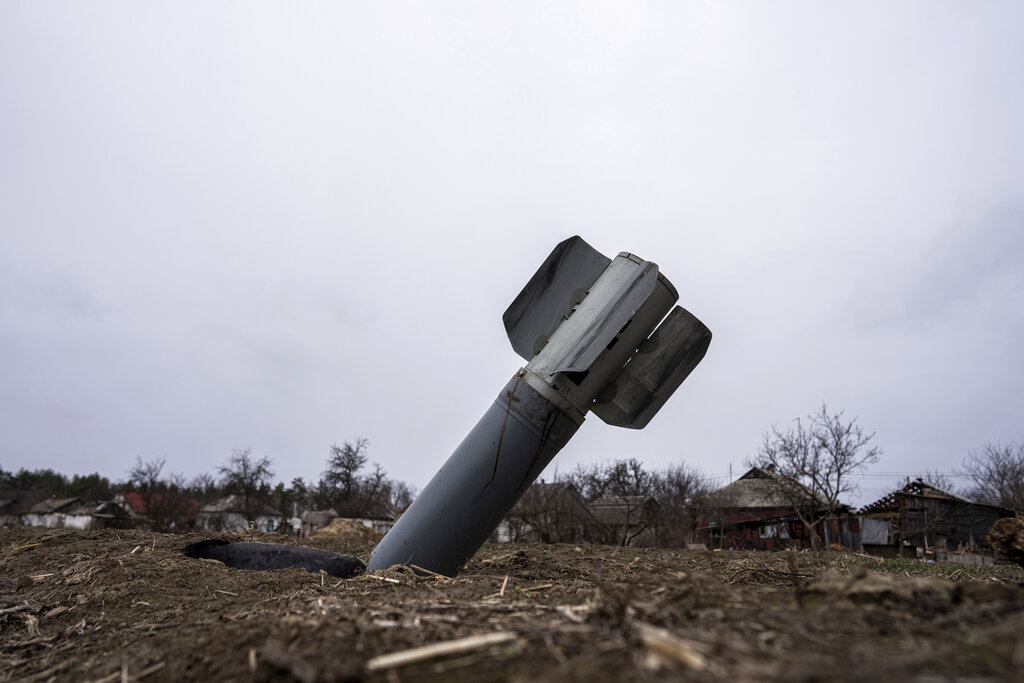 The tail of a missile sticks out in a residential area in Yahidne, near of Dnipro, Ukraine, Tuesday, April 12, 2022. (AP Photo/Evgeniy Maloletka)

The veteran admits that the significant and ever-expanding sanctions imposed on Russia by the United States and the West in an attempt to stop the war in Ukraine have disrupted Moscow’s economy, but they have not had the desired effect on the battlefield.

Dubik explains that the Ukrainian resistance has had a massive impact on the front line with the support of the U.S. and NATO. This decisive aspect made Vladimir Putin withdraw his forces from the Kyiv region, not because he wanted to, but because it was necessary.

The resistance of Ukrainian troops has led Putin to abandon his original goal of occupying Kyiv and replacing the government led by Zelensky, at least for now, according to the general, who served on tours of Bosnia, Haiti, and Iraq.

Putin has had to resort to Plan B and seek to partition Ukraine, Dubik claims. To do this, the Russian president sent forces to the east of the country to join the existing ones and to try and conquer Mariupol.

Whether the Russian attacks will be successful with this plan remains in question. The competence of the troops is questioned, the morale of the military is low, and the combined attacks are difficult for the Russian commanders, according to Dubik.

If Putin succeeds in Plan B, he will probably return to Plan A: to completely conquer and subjugate Ukraine. However, the Ukrainians are willing to fight and defend themselves against Moscow’s aggression.

As long as Ukraine is willing to fight for its right to self-determination, the Allies should provide it with everything it needs, weapons to allow Zelensky’s government to go on the offensive, forcing Russian troops to retreat to their former positions. the beginning of the invasion.

The United States, NATO and other allies must make every effort to ensure Ukraine’s success in the next stages of the war, insists Dubik, with the key to the victory being military force. Sanctions are merely ancillary, he warns.

James M. Dubik is a senior fellow at the Institute for the Study of War. He served in military command and operational roles in Bosnia, Haiti and Iraq, and helped train forces in Afghanistan, Japan, South Korea, Thailand, Honduras, and many NATO countries.