Following Bennett’s face-to-face talks with Putin over the weekend, the Israeli foreign minister will meet U.S. Secretary of State Antony Blinken on Monday 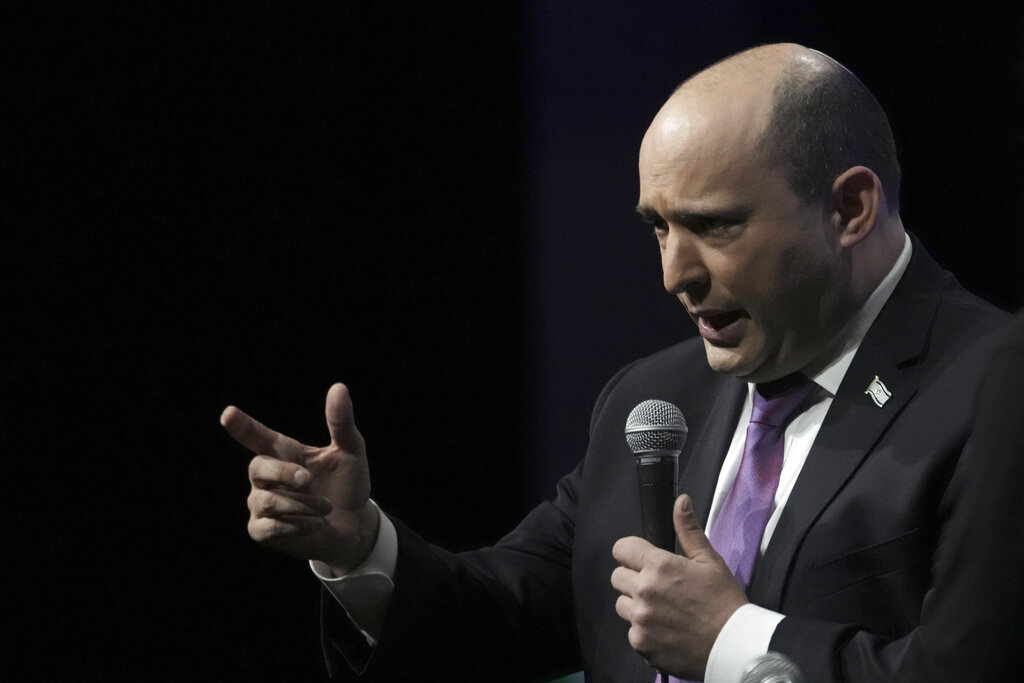 Israeli Prime Minister Naftali Bennett speaks at a cyber tech conference in Tel Aviv, Israel, Thursday, March 3, 2022. At the conference, Bennett called on world leaders to get Russia and Ukraine "out of the battlefield and to the negotiating table," less than a day after he spoke to Russian President Vladimir Putin and Ukrainian President Volodymyr Zelenskyy. (AP Photo/Ariel Schalit)

Another round of mediation talks took place on Sunday, as Russian President Vladimir Putin engaged in a telephone conference with his Ukrainian counterpart Volodymyr Zelensky; Israeli Prime Minister Naftali Bennett; and the German and French leaders, Olaf Scholz and Emmanuel Macron.

The Israeli public service broadcaster Kan reported that a potential ceasefire was possible following the talks, with Israel and other allies warning of the danger of the situation in Ukraine escalating even further.

Returning from Germany on Sunday, Naftali Bennett told a regular government meeting that he had fully coordinated his talks with Putin with the United States.

“We will continue to try, even if the chances are not high,” Bennett said of his mediation efforts, which included three talks with Ukrainian President Zelensky over the past 24 hours, three talks on the phone, and a personal trip to Moscow and Berlin on Saturday. Though, as a religious Jew, this may violate the ban on working on Saturdays, there are exemptions made for attempts to save lives.

“Of course, I went there with the blessing and encouragement of everyone involved,” Bennett said of his trip to Moscow. “Even if the chances are not high, if there is only a small chance, if we can get to every side, I consider it our moral duty to make every effort,” added the Israeli prime minister, who was a businessman before his political role.

The Israeli prime minister, however, did not elaborate on what happened at a face-to-face meeting in the Kremlin, where only Bennett, the minister for construction, Zeev Elkin, and Putin and his interpreter were present.

As part of the Israeli mediation work, Foreign Minister Jair Lapid will travel to Latvia on Monday to meet with U.S. Secretary of State Antony Blinken.