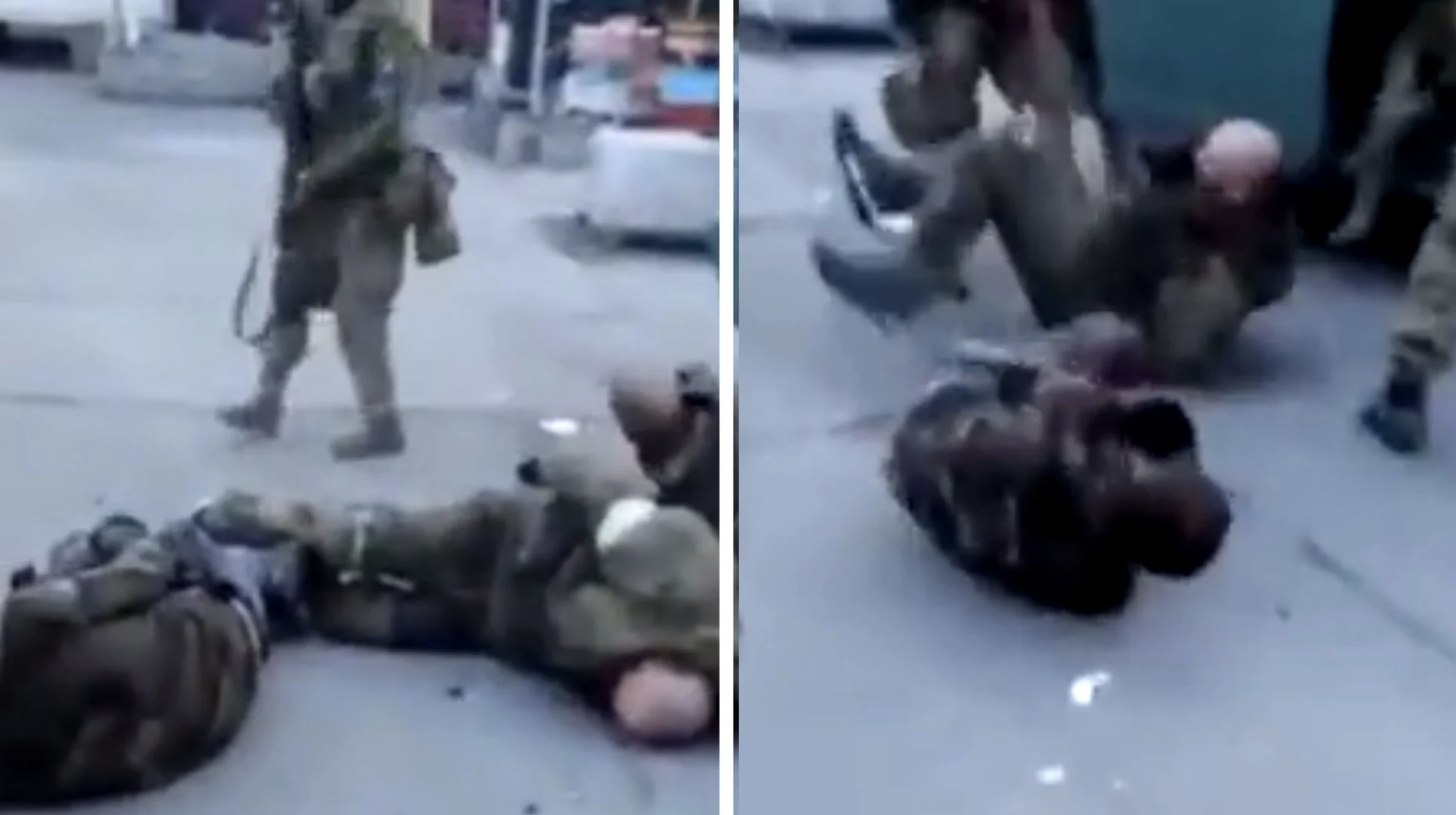 Since Russia’s invasion of Ukraine began, a number of disturbing videos have circulated involving Russian prisoners of war being tortured or executed by Ukrainian soldiers, with the most recent one confirmed as real by the New York Times.

In the video posted on Telegram on Monday, Ukrainian soldiers are seen shooting Russian troops on a village road outside Kyiv. The Times verified the video is authentic, but refused to publish it due to its graphic nature. In the footage, a Ukrainian soldier is seen shooting a Russian soldier three times while he lies on the ground in agony, while another in Ukrainian unit says, “He’s still alive. Film these marauders. Look, he’s still alive. He’s gasping.”

The video shows at least three other soldiers near the initial victim — two of them dead and the other close to death, who appears to be gasping for air. The video does not show whether the Ukrainians shot the one Russian soldier that remains alive. One of the dead Russian soldiers has a head wound and his arms tied behind his back, raising the possibility that they were captured first and then executed. All the Russians have white armbands designed to mark their designation as belonging to the Russian side.

Near the Russian soldiers is a BMD-2 infantry fighting vehicle, which is used by Russia’s airborne units.

The Ukrainian soldiers wear blue armbands in the video and shout, “Glory to Ukraine.” Although their unit is unclear, a Ukrainian news agency claims the ambush was conducted by the “Georgian Legion,” a group of Georgian volunteers who have fought with the Ukrainians since 2014, according to the Times.

The executions occurred after the Russians retreated from the outskirts of Kyiv, with the Times reporting that up to 300 civilians were killed by the Russians in Bucha and other settlements.

Other videos of abuse of Russian POWs have proliferated on Telegram. In one of the most notable videos, three Russian soldiers are unloaded from a truck, reportedly outside Kharkiv, and systematically shot in their legs.

Human Rights Watch has demanded that Ukraine conduct a thorough investigation into an incident.

In a press release published on Thursday, the New-York based NGO made reference to footage which had been posted online on March 27 which appears to show “Ukrainian forces abusing captured Russian fighters or combatants, who have prisoner of war status, including shooting three of them in the leg.

Other Russian soldiers appear to be laying outside the truck wounded before the shooting incident. It is unclear if they were shot in a similar manner.

“The incident appears to have taken place in a village near the city of Kharkiv, which Ukrainian officials had announced retaking two days earlier,” the organization added.

“All the information in the videos that suggests abuse, and maybe worse, of POWs needs to be subject to an effective investigation,” said Aisling Reidy, senior legal advisor at Human Rights Watch. “It should be possible to verify if abuse took place, and from there to hold those responsible to account.”

On Sunday night, Oleksiy Arestovich, presidential adviser to Volodymyr Zelensky, confirmed that the case could be investigated as a war crime.

According to a Danish volunteer with the Ukrainian army, Russians are being executed. The trained sniper spoke with Denmark state broadcaster TV2, saying that while he has killed Russians himself, they have only been in combat, whereas his Ukrainian colleagues have been executing soldiers who have already been captured. Reporters for the network referred to their source as “Jones” but refused to release the Danish volunteer’s name. They have confirmed that he is in Ukraine and fighting with the country’s army. The Danish report states:

“There are many indications that war crimes are being committed on both sides of the war in Ukraine.

Thousands of Russian soldiers are believed to have lost their lives during the invasion of Ukraine.

Many have been killed in fighting, but according to a Danish soldier in Ukraine, the Ukrainians are also killing captured Russians, even though it is against the laws of war.”

Speaking to TV2, the Danish volunteer says, “I have heard about one successful prisoner exchange, and that is it. People are being killed.”

VIDEO: ‘They are cockroaches!’ – Ukrainian doctor reveals he has ordered staff to ‘castrate’ captured Russian soldiers

An interview with a Ukrainian doctor who says he has ordered the castration of Russian soldiers has been widely circulated on both Russian and U.S. social media networks

In particular, “Jones” recounted that an 18-year-old Russian POW spoke to him, saying that he worked as a computer programmer at home in Russia and that he did not want to be part of the war in Ukraine at all.

“But the following morning he was buried,” says Jonas.

TV2 points to an earlier declaration from the Ukrainian army In early March. A statement from Ukraine’s Special Operations Command said that Russian artillery would no longer be captured and shown mercy, but that anyone contributing to the bombing of civilians would be “slaughtered like a pig.”

Since the start of the conflict, Russia has shelled and struck a number of civilian areas, resulting in substantial casualties, with estimates placing the number well over 1,000 civilian dead, although that number is likely substantially higher. Ukraine has also launched limited strikes against civilian centers in Donetsk and other areas, resulting in some deaths, but substantially fewer than Russian strikes. Prior to the Ukraine invasion, the UN confirmed that since 2014, Ukrainian artillery and missile strikes killed more than 3,000 civilians in the Donetsk breakaway region of Ukraine.