The Catholic Church of Belarus sided with the protesters against the current ruling government, which apparently has not been forgotten 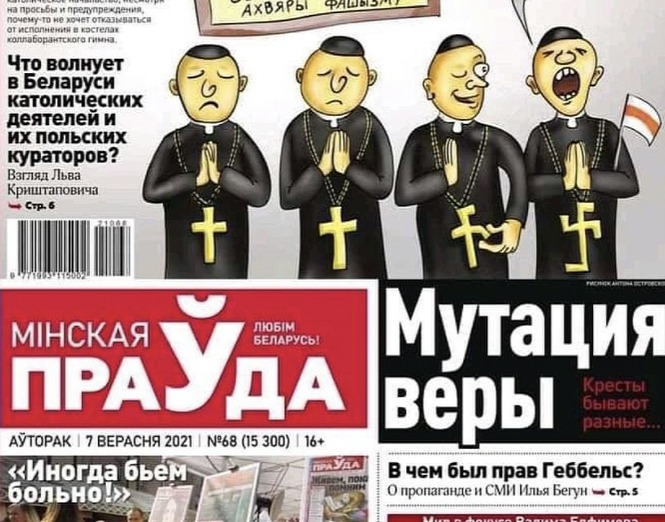 Father Yuri Sanko, the spokesman for the Belarusian Catholic Church, said that the publication was “a spit in the face for the millions of Catholics living in our country”.

He added that “if you look at the caricature on the front page which defames the cross, it is offensive to all Christians tantamount to Nazi symbolism and propaganda.“ But he also said that the Church will always pray for its enemies.

The front page of the paper displays a cartoon of Catholic clergy with the cross turning into a swastika. One of the priests is holding the white and red national flag which has become the symbol of protest against electoral fraud of the presidential election last year, and singing the “Mahutny Boza” – a hymn which is being banned by the authorities.

The text also alleges that this hymn and national symbols are the attributes of Nazi collaborators responsible for atrocities against civilians in the Second World War. The cover of the paper states that the Catholic leadership and their Polish patrons are refusing to stop playing the “collaborators“ hymn.

The Catholic Church was firmly on the side of the protesters during last year’s events and has called for social dialogue. The Belarusian state accuses the Church of backing extremists and a color revolution inspired by the West.

Last December, the authorities stopped Archbishop Tadeusz Andrusevych, the then primate of Belarus, to enter the country. He has since retired.

The Orthodox church is the dominant religion in Belarus, but there are still 1.4 million Catholics according to Church data.