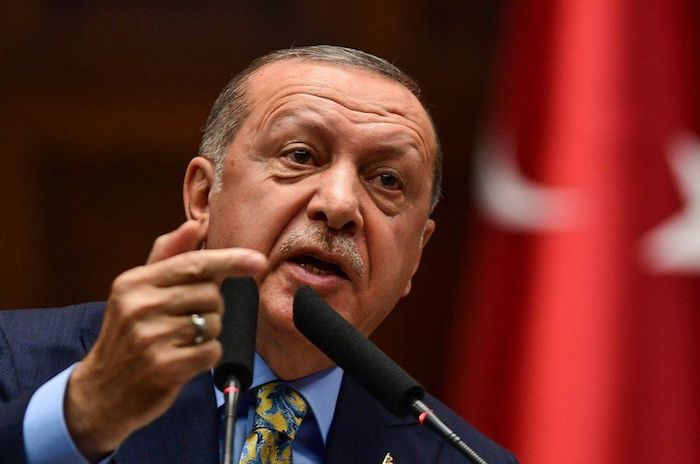 After all, Europe has had plenty of time to address Erdogan’s intimidation tactics. He has relentlessly repeated his warning to “flood” Europe since the refugee crisis first started.

In 2016, when the European Parliament voted to freeze negotiations on Turkey joining the EU, Erdogan warned, “if you go any further, these border gates will be opened.”

That year he once again said, “We can open the doors to Greece and Bulgaria anytime and we can put the refugees on buses,” if the EU didn’t pay Turkey €3 billion in refugee aid a year.

Turkey didn’t stop there, and a few months later while demanding visa-free travel for Turkish citizens to Europe, with a Turkish government minister saying, “Unless visas are removed, we will unleash the refugees.”

During his speech in October of 2019, Erdogan made clear that the world is not offering enough support to Turkey for sheltering Syria’s refugees, saying, “You either support us to have a safe zone in Syria, or we will have to open the gates. Either you support us or no one should feel sorry. We would like to host one million refugees in the safe zone.”

The presence of 3.6 million migrants that Turkey can ship off to Europe at any time raises serious questions about Europe’s inability to counter Turkish foreign policy. Just recently Erdogan reiterated his desire to obtain nuclear weapons. If he were to start a nuclear program in earnest, how would Europe respond when Erdogan’s refugee threat has been so effective in the past?

Erdogan’s power over EU politicians is further evidenced by his power to insult who he likes with near impunity. In 2017, he accused German Chancellor Angela Merkel of “Nazi measures” after German officials stopped Turkish ministers from campaigning for votes from Turkish residents residing in Germany. Merkel barely responded to Erdogan, presumably because she knew her position was weak.

More importantly, Turkey has been effective at wrangling concessions from the EU, and through its threats was successful at securing €3 billion in funding for refugees in Turkey and visa-free travel for Turkish citizens into Europe.

All bark and no bite?

Europe has no plans to hit Turkey with sanctions over the Syria incursion. While European members of the UN Security Council did call for an end Turkish aggression in northern Syria, the countries have stopped short of imposing sanctions, the only real tool that could effectively challenge Turkey’s actions.

When Turkey shot down a Russian figher jet flying near the Turkish border in 2015, Russia’s ferocious reaction and introduction of harsh sanctions was Putin’s way of instilling some healthy fear into Erdogan. If Turkey were to threaten Russia with 3.6 million refugees, there is little doubt how Russia would react to such an insult.

On the other hand, Erdogan’s perception of Europeans is one of weakness and disunity. What Europe lacks is a coordinated effort that would turn Erdogan’s threat into an entirely empty one. But that would require the entire EU to implement strong policies for effective border security, dismantling smuggler operations, cutting benefits to refugees who arrive in the EU illegally, and increasing patrols in the Mediterranean, all measures the EU refuses to take in a unified and decisive manner.

Throughout Europe, fear of Erdogan is pervasive, but Visegrad nations have a different mindset that could show Europe a smarter way of dealing with Turkey. In response to Erdogan’s most recent threat to flood Europe with refugees, Prime Minister Viktor Orban said that he would “use force” on Hungary’s southern border if Erdogan followed through on his threat. While he was clear that nobody wanted to resort to those measures, Orban said he deemed them necessary to protect Hungary’s sovereignty.

Orban was instrumental during the refugee crisis in convincing Europe to make efforts to secure its borders, going so far as to install a massive border fence in Hungary that brought a flood of refugees to a mere trickle.

While some European leaders may have publicly decried his actions, Orban’s barrier and rhetoric were not only successful strategies but also inspired countries across Europe to erect similar barriers that further deterred refugees from entering Europe.

If Europe were to adopt the same tough stance with Turkey, there is little doubt it would be in a better position to challenge Erdogan on issues like human rights, military force, nuclear weapon acquisition, and other important areas of concern.

Until that happens, Erdogan will be in a position to dangle the threat of 3.6 million people over Europe whenever he likes and extract whatever compromises he wants from the EU now and well into the future.