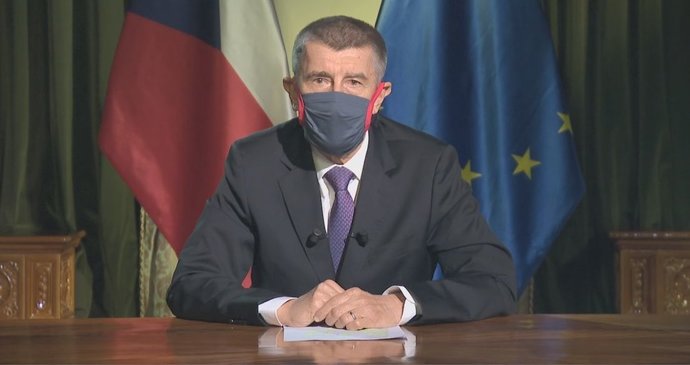 The Czech Republic never before faced such a challenge as the current coronavirus pandemic, no one was prepared for it, and the whole world is learning how to react to it, Prime Minister Andrej Babiš (ANO) said in a televised speech on Monday.

“As the prime minister, I am personally responsible for all crisis measures. And I take full political responsibility for them,” said Babiš, adding that the people’s trust in the government and public awareness are crucial for handling the situation.

Babiš did not hesitate to admit mistakes and problems in dealing with the epidemic.

“The whole world deals with the pandemic, and we, as you do, still learn how to respond to it. Please forgive us for partial errors or problems,” he asked the citizens.

According to the prime minister, government and state institutions are doing their best to protect the lives and health of citizens. Overall, the Czech Republic is doing very well and will manage the situation, said Babiš.

Babiš further thanked the Czechs for their patience when accepting the restrictive measures as the situation is not easy for anyone.

“It is possible that these measures will last longer than we originally thought. I say it openly. That’s how it is. But don’t worry,” he said, convinced that the effect of the measures will soon show and that the country will overcome the crisis.

In his speech, Babiš also thanked all health professionals, police officers, firefighters, and soldiers, as well as volunteers, who selflessly help others by, for example, sewing masks.

“It warms my heart to see people all over the country, including those whose lives are not a bed of roses, helping,” he said, adding that he appreciates that people have not succumbed to panic.

Babiš also thanked those who follow the preventive measures and called on people to wear face masks in public, criticizing those who deliberately violate the mandatory measure.

In his speech, the prime minister also commented on the lack of protective equipment, which, according to Babiš, is difficult to secure due to a worldwide shortage. Babiš thanked Minister of the Interior Jan Hamáček and President Miloš Zeman as they negotiated a supply of medical supplies in China.

Most politicians praised the prime minister for his speech with interior minister and Social Democrats (ČSSD) chairman Jan Hamáček, saying that the speech was “adequate to the seriousness of the situation.”

“It is great that the prime minister called for unity and acknowledged the errors made by the government,” said Civic Democrats (ODS) chairman Petr Fiala, as other representatives of the opposition parties also voiced their appreciation for the speech.