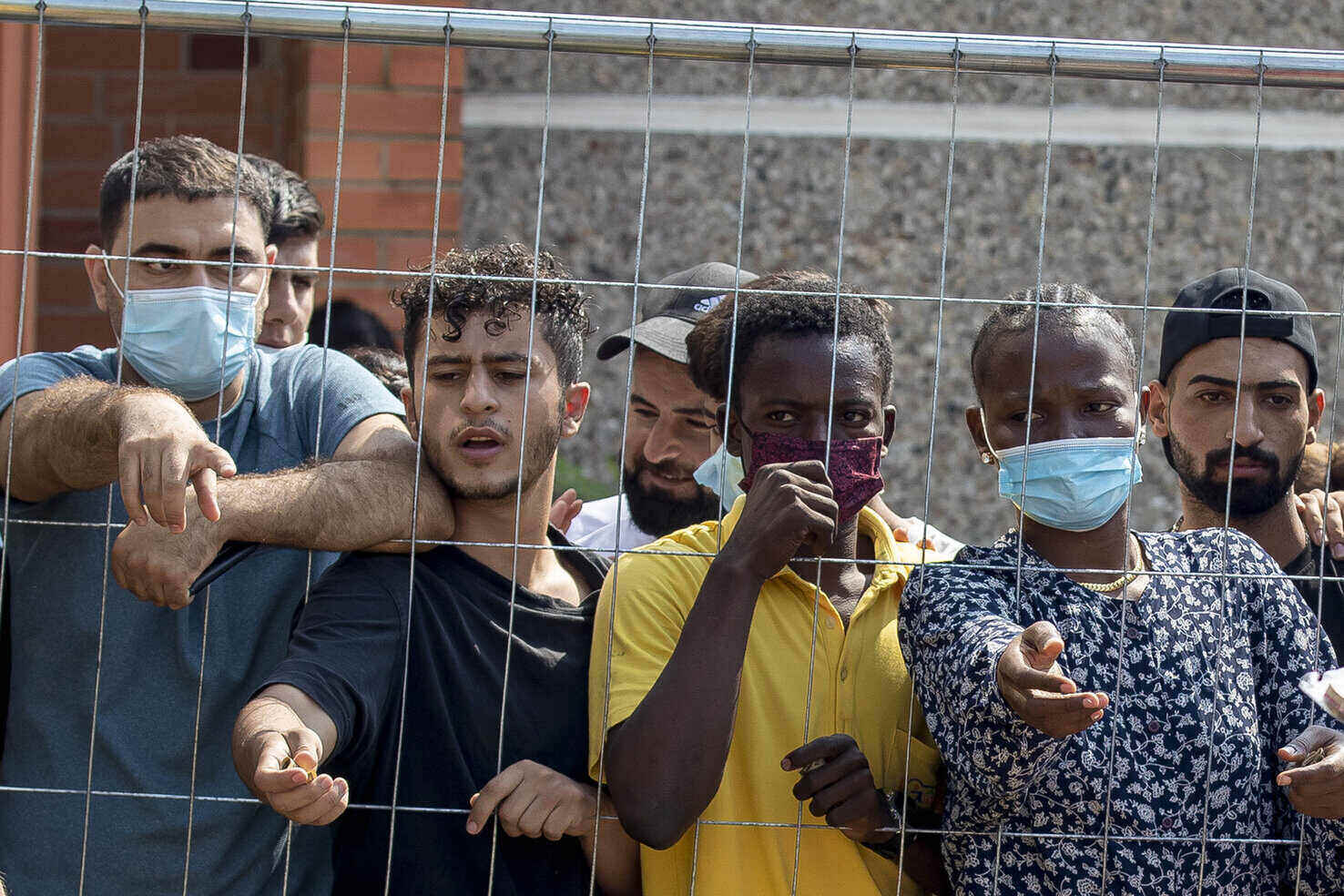 Migrants wait to buy some things standing behind the fence at the refugee camp in the village of Verebiejai, some 145km (99,1 miles) south from Vilnius, Lithuania, Sunday, July 11, 2021. Migrants at the school in the village of Verebiejai, about 140 kilometers (87 miles) from Vilnius, haven't been allowed to leave the premises and are under close police surveillance. Some have tested positive for COVID-19 and have been isolated in the building. (AP Photo/Mindaugas Kulbis)
Jan Hamáček Migrants Lithuania News

The Czech Republic could help Lithuania with the influx of migrants from Belarus, either financially or by sending police officers

The Czech Republic could help Lithuania with the influx of migrants from Belarus, either financially or by sending police officers. The situation was discussed by the State Security Council on Friday morning, announced Deputy Prime Minister and Minister of the Interior Jan Hamáček. The government should discuss concrete steps during today’s meeting.

“It is clear that Lithuania needs help. The Belarusian regime imports migrants from the Middle East and Central Asia to Belarus in an organized manner. Then they desert them by the Lithuanian border,” said Hamáček.

According to Hamáček, the main part of the aid should come from the European Union. “But also at the national level, just as we help in Northern Macedonia or Slovenia, we are ready to provide aid, both financially and by sending police officers, if necessary,” he added. For example, the police have been sending their members to Northern Macedonia since 2015 based on bilateral cooperation between countries affected by the migration crisis.

Asked if a specific number of police officers to help at the border was already being considered, Hamáček said that Czechia was still waiting for a reaction from the Lithuanian side. “In general, we are talking about contingents of dozens of police officers. If they are interested in such a contingent, we can send it either within Frontex or bilaterally,” he noted.

“The same applies to financing. The European Commission should help finance the border constructions that will have to be built there, but we are also ready to help directly,” explained Hamáček.

The Deputy Prime Minister also recalled Thursday’s Council of EU Interior Ministers, where the situation was discussed. Together with Denmark, the Netherlands, and Austria, Czechia strongly supported Lithuania, he said on Twitter.

Lithuania, which has provided refuge to many Belarusian opposition politicians, is accusing the Belarusian regime of purposefully allowing migrants to cross the common border, which is both the EU’s external border as well as the border for the Schengen area of free movement of persons. Last week, Prime Minister Ingrida Shimonyté indicated that Belarus was offering migrants flights to Minsk from Baghdad and possibly also from Istanbul.

A few weeks ago, the Lithuanian government decided to build a 550-kilometer-long barbed wire fence after migrants began crossing borders illegally this spring. At the same time, the Lithuanian authorities moved practically all available forces and border guards to the Belarusian border. Some of them withdrew from other places in the country, as well as from the border crossings with Poland, where they have so far checked compliance with travel coronavirus restrictions.

On part of the border (about 80 kilometers), the fence is built from previous years, and about 260 km is monitored electronically. Lithuania’s border with Belarus is 680 kilometers long.

In Lithuania, according to data from early last week, 1,676 foreigners were detained near the border with Belarus this year, a number that is twenty times more than last year, the Delfi.lt server noted.

Title image: Migrants wait to buy things while standing behind the fence at the refugee camp in the village of Verebiejai, some 145km (99,1 miles) south of Vilnius, Lithuania, Sunday, July 11, 2021.